China Reclassifying Dogs as 'Pets' Instead of 'Livestock'

Having kicked off a global pandemic by selling wild animals for human consumption, China may finally be rethinking its policy of letting people eat whatever disgusting thing they feel like. Reuters is reporting that China is preparing to reclassify dogs from livestock to pets, even though dog meat remains a delicacy in many different parts of China.

"As far as dogs are concerned, along with the progress of human civilization and the public concern and love for animal protection, dogs have been 'specialized' to become companion animals ... and they will not be regulated as livestock in China," the ministry of agriculture in China announced in a statement.

Approval of President Trump’s job performance inches up to a record high in the latest Fox News Poll, as voters rally to both the White House and Congress in the fight against coronavirus.

Amid widespread concerns about the virus’s spread and personally getting infected, 49 percent approve of the job Trump is doing as president.  That’s up from 48 percent two weeks ago and 47 percent in late February.

Forty-nine percent of voters disapprove, marking only the third time in Fox News polling that fewer than half rate him negatively. 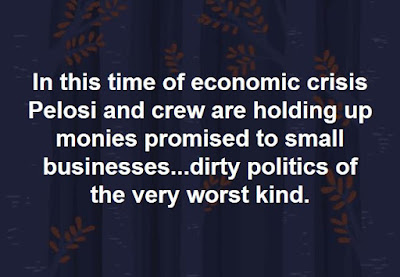 Posted by Diane Sori at 8:20 AM No comments: