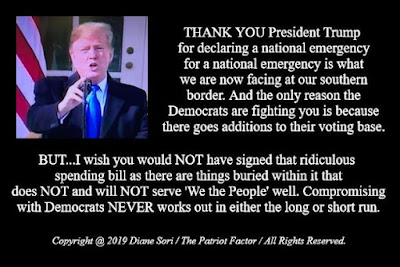 Posted by Diane Sori at 7:30 AM No comments:

Plan heads off another shutdown, diverts money from elsewhere in government to pay for additional barriers

By Rebecca Ballhaus / Wall Street Journal
WASHINGTON—President Trump declared a national emergency Friday over border security, bypassing Congress to divert money from elsewhere in the government to pay for additional barriers along the southern border, a move likely to ignite immediate court challenges.

Mr. Trump also signed a bipartisan spending bill that will keep the government funded through the fall and allocates $1.38 billion for 55 miles of border barriers—far less than the $5.7 billion the president had asked for.

Unsatisfied with the amount set aside by lawmakers for barriers, Mr. Trump now plans to also draw roughly $6.7 billion from military and other sources, without the approval of Congress.

In remarks at the White House, Mr. Trump defended the actions as critical to national security.

“We’re talking about an invasion of our country,” he said. At another point, however, he suggested an emergency declaration wasn’t necessary. “I didn’t need to do this, but I’d rather do it much faster,” he said.

Read entire article here: https://www.wsj.com/articles/trump-set-to-declare-national-emergency-at-border-sign-legislation-to-fund-government-11550241799
Posted by Diane Sori at 7:29 AM No comments:

The opinions expressed by columnists are their own and do not represent the views of Townhall.com.
Back in November, I predicted all this. I wrote my most controversial column. After the GOP lost the House, I predicted the big winner of the November midterms would be ... President Donald Trump.

I'm sure some of you thought I was stark raving mad. But my November prediction has proven 100 percent accurate. Back then, I prophesied that if Democrats got in charge, they would embarrass themselves, expose themselves and destroy themselves. The craziest and most radical Democrats would no longer be hidden.

I was on the money. The best thing that ever happened to Trump was Democrats taking the House.

Have you seen the latest polls? At this writing, President Trump has 50 percent approval according to always-accurate Rasmussen Reports. That's higher than Barack Obama's 48 percent at the 24-month mark of his presidency. Yes, Trump is just about the most popular he's ever been -- even after the longest government shutdown in American history.