Tomorrow, Wednesday, August 5th, on RIGHT SIDE PATRIOTS on CPR Worldwide Media from 2 to 4pm EST, Craig Andresen and Diane Sori will discuss in detail the vile organization known as Planned Parenthood, and will talk about Hillary's being in violation of the Espionage Act. 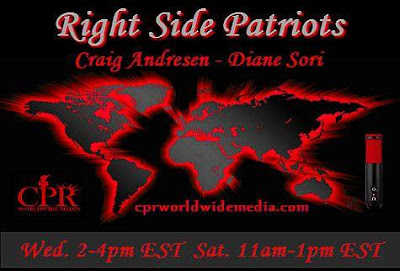 “As long as we’ve got to fight to make sure women have access to quality, affordable health care, and as long as we’ve got to fight to protect a woman’s right to make her own choices about her own health, I want you to know that you’ve also got a president who’s going to be right there with you, fighting every step of the way...Thank you, Planned Parenthood. God bless you.”
- Barack HUSSEIN Obama's 2013 words said during a speech at a Planned Parenthood event

Abortion is legal in this country with the right of a woman to have an abortion being upheld by the courts on the local, state, and federal levels. And that must be kept in mind by those on both sides of the abortion issue for while this is not an article on the moral or religious rights and wrongs of abortion, it is an article about how what should have remained a states issue now has become a federal issue as our taxpayer dollars are being used...and have been used since 1970...to aid Planned Parenthood in their performing of almost half a million abortions a year...of performing one-third of all U.S. abortions.

Planned Parenthood...America's premier abortion mill...and the very group that actively lobbies against abstinence-only education in our nations public schools... has always had a somewhat dubious reputation as its founder, Margret Sanger, believed that blacks and the poor were “unfit” to reproduce...and basically founded it as a way to 'eliminate'...if you will...the black race in America. Now bringing the word 'dubious' to a new level, Planned Parenthood is under the microscope...they claim...for just trying to help women who want to 'donate' fetal tissue for legitimate medical research. But nothing could be further from the truth as Planned Parenthood is being paid monies for the organs it takes from aborted babies... directly contradicting the very word they use...'donated'...meaning given for free.

And after a series of horrific videos* recently surfaced...with a promised 8 to 12 more to come...and with some showing the ripped apart bodies of aborted babies and some showing Planned Parenthood executives talking cavalierly over dinner and drinks about the profits and perks received in their cutting up and harvesting the organs of dead babies...and they use the word 'babies' not fetuses...now allegations are being made by the Center for Medical Progress (CMP)...the anti-abortion non-profit group that made the videos...that Planned Parenthood shipped for sale fully 'intact' dead babies...babies who survived abortions but who were willingly and knowingly left to die...to StemExpress...a California-based company that provides organs and tissue to medical researchers. And StemExpress is the same group who along with Planned Parenthood is exposed in the videos.

And this allegation of their receiving and selling intact baby organs is exactly why StemExpress was able to secure a court order temporarily preventing CMP from releasing any videos that include employees of StemExpress until it's decided if the verbal recordings and videos were made legally in regard to California law. And just this past Friday a federal judge...Judge William H. Orrick, III...nominated to his position by Barack HUSSEIN Obama himself and a major donor to and bundler for his 2012 re-election campaign...granted an injunction against CMP which stopped them from their releasing any more videos, and that injunction came just hours after the order was requested by the National Abortion Federation, who claimed CMP was in violation of non-disclosure agreements its journalists had signed.

But in a recent interview with CNN...David Daleiden...anti-abortion activist, journalist, and head of CMP...the very man whose videos detailed how he tricked the“abortion industry” and exposed Planned Parenthood's baby parts “harvesting secrets”...said that when he and his team from CMP met with StemExpress executives they freely admitted to him that they do sometimes get from Planned Parenthood fully intact dead babies that they themselves then have to cut up to secure the organs needed for sale. If that is true...and we only say if...then the unthinkable horror of Planned Parenthood doctors delivering live babies and allowing them to die violates not only the founding principal of the Hippocratic Oath that all doctors take...as in “First do no harm”...but becomes paramount to murder...and court injunctions and restraining orders be damned.

Cutting up dead babies...the stuff of your worst nightmares...is indeed what Planned Parenthood has sunk to even while claiming that abortions currently account for only 10% of their services (as per the newest figures), and that no federal monies...meaning our taxpayer dollars...go to subsidize abortions except in certain limited cases such as rape, incest or when the life of the mother is in jeopardy. So, for arguments sake, let's say that is true, that means that 90% of what Planned Parenthood does is unnecessary as those other services they provide...contraceptives, prenatal services, adoption services, mammograms, cancer screenings, and sexually transmitted disease and infection testing...could easily be done at local community clinics with those monies that now go to the almost 700 Planned Parenthood 'so-called' health clinics...that they claim treat 2.7 million women a year...going instead to fund said local community clinics.

So why did we fund Planned Parenthood to a tune of $540.6 million in 2013 (the latest verifiable figure available)...and why are we still funding a private organization whose net revenue increased to a total of $1.2 billion in the fiscal year ending June 30, 2013 alone...rather than using those monies to fund local community clinics... clinics that do not perform abortions or sell the body parts of aborted babies...why... because Planned Parenthood has now, thanks to our taxpayer dollars, been given the all-important monetary means for furthering Margret Sanger's eugenics agenda...an agenda supported by the liberal left and their pro-abortion agenda.

Now let’s get down to some of the brass tacks regarding Planned Parenthood and what they do. As stated earlier in this article, Planned Parenthood receives some $540.6 million dollars from the American taxpayers annually which comprises between 41% and 45% of their annual budget, but what do they actually do with all that money?

Also, as stated earlier, Planned Parenthood claims that only about 10% of what they do involves the performing of abortions. If we take that as the truth, which is difficult at best to do, what then are the other actions performed by Planned Parenthood?

Now then, remember that Planned Parenthood is a private organization which receives $540.6 million U.S. taxpayer dollars annually, however, they also post in their 2013-2014 annual report an access in funding of some $127 million dollars as well as a whopping $1.4 billion dollars in net assets which begs the reinforced question…why on earth are we the taxpayers funding this abortion mill?

So then, what else does Planned Parenthood do with the money provided by American taxpayers?

In their 2012-2013 annual report, Planned Parenthood states clearly that...“We are the most effective advocate in the country for policies that protect access to safe and legal abortion and advance women’s health, actively lobbying in every state legislature...” But to what end is the real question considering the numbers above.

According to that 2012-2013 report...Planned Parenthood spent $26 million on public policy; $31.3 million on building 'advocacy capacity;' $14.8 million on engaging communities; and Planned Parenthood’s national office spent $3.2 million to “refresh our brand.” Yes, the American taxpayers are being bilked for the costs of a private company promoting themselves as well as for the abortions they perform...abortions that make up 94% of all the pregnancy services they offer. 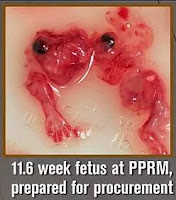 So while liberals pat themselves on the back for their 'progressive' support of Planned Parenthood, it bears note that what Planned Parenthood believes to be their best moments according to their 2012-2013 annual report, which highlights the organization's accomplishments, included their getting NBC to televise an abortion...and also included the 'largest gender gap ever recorded' in 'the presidential election and in key state elections;' Obamacare’s contraception mandate; Wendy Davis’ filibuster in support of late-term abortions in Texas; and the passing of a law in California that allows non-physicians to provide abortion services.

Not a single accomplishment regarding prenatal services, cancer prevention or adoption services. Nope...not one.

Here’s where the real agenda comes in and it is not an agenda Obama or the liberals at large want you to know. 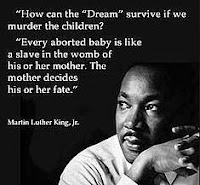 According to Dr. Martin Luther King Jr., “The Negro cannot win as long as he is willing to sacrifice the lives of his children for comfort and safety." How can the “Dream” survive if we murder the children? Every aborted baby is like a slave in the womb of his or her mother. The mother decides his or her fate.”

While liberals exclaim “My body my decision,” Dr. King was correct...it is the mothers deciding the fate of the babies not their own fates, and by straight forward facts and statistics, black and Hispanic babies...minority babies...are aborted at nearly four times the rate of non-Hispanic and white babies, which is exactly what Planned Parenthood founder and racist Margaret Sanger both envisioned and wanted.

CDC numbers show clearly that while blacks comprise only 13% of the American population, they account for more than 36% of all abortions with Hispanics accounting for 25% of all abortions. In fact, according to a 2009 report, more blacks were killed by abortion than were killed by any other cause that year and that still holds true today, as does the fact that half of all black pregnancies end in abortion. Sadly, 1,784 black babies are killed by abortion each day, and since 1973 when abortion became legal, abortion has wiped out over 25% of the black population. And while 3,446 blacks were lynched in the U.S. between 1882 and 1968, that number is surpassed in less than 3 days by abortion.

Remember, at the very beginning of Planned Parenthood, it was the organization’s founder...Margaret Sanger...who stated..."We should hire three or four colored ministers, preferably with social-service backgrounds, and with engaging personalities. The most successful educational approach to the Negro is through a religious appeal. We don’t want the word to go out that we want to exterminate the Negro population, and the minister is the man who can straighten out that idea if it ever occurs to any of their more rebellious members,” but that was, in fact, her goal. According to Sanger...”[We should] apply a stern and rigid policy of sterilization and segregation to that grade of population whose progeny is tainted, or whose inheritance is such that objectionable traits may be transmitted to offspring,” and “Give dysgenic groups [people with “bad genes”] in our population their choice of segregation or [compulsory] sterilization,” as well as...”Birth control must lead ultimately to a cleaner race.”

Planned Parenthood is nothing more than an abortion mill steeped in racism that dabbles in a few other endeavors for no other reason than to provide cover for their real agenda...the thinning of minorities through the killing of babies. And while they continue to reap American taxpayer dollars to further their disgusting agenda... they are selling parts of those aborted babies to further line their pockets on the side.

And now not even waiting for the next batch of videos to be released, late yesterday afternoon the Senate in a 53 to 46 vote...falling 7 short of the 60 votes needed to defund Planned Parenthood...will shamefully continue to support the murder of America's babies...minority and otherwise...to the tune of almost 500 million of our taxpayer dollars per year. And as the Obama White House of course sees this as a victory, some governors...like Louisiana Governor Bobby Jindal, who said that “this is an organization not worthy of receiving public assistance from the state”...are working to severe their state's Medicaid contracts with Planned Parenthood.

And so with this vote...a vote obviously based upon politics and party loyalties instead of upon common sense and simply doing the right thing...once again 'We the People' are shown why this country is in the sad shape it's in...just saying.
______________________
* Click on links to see the baby parts selling videos: