I have always said, rather it be in print or on the radio, that the country who first colonizes the Moon controls both the Earth and space...and in today's ever volatile world it best be the United States for obvious reasons. Just imagine if what's happening now in Ukraine were to happen on a global scale if Russia...if Vladimir Putin...were ever in control of the Moon. Just imagine the apocalypse spoken of in the Bible paling in comparison to what could be a “scorched earth” policy...a policy now happening in Ukraine...but see it being initiated from the Moon. Just imagine Armageddon on a here and now tangible level minus religious connotations.

The weaponizing of space and thus the overseer of Earth could possibly fall into the hands of a truly evil man, a scary thought indeed yet it's not out of the realm of possibility for the Moon, which Russia has long coveted, is the much needed first step in Russia's domination of Earth let alone space. In fact, while only the United States has successfully landed men on the Moon, something Russia nor China has yet to do, Russia's true designs regarding the Moon and moving outward from there have nothing to do with Pravda spewed propaganda that Russia's space intentions are peaceful. Exploring and colonizing the Moon, scientific research being done on the Moon, the Moon being used as a launch pad for deep space exploration, or even for the betterment of mankind is not part of Putin's agenda and never was, for what I believe is that Putin sees the Moon itself and its natural resources as the ultimate weapon he could use against all who don't tow his dictatorial line.

How so...think of Russia's need for Ukraine's natural resources, but think of it to the 9th degree for certain natural resources found on the Moon would, because of their very nature, afford the first country to colonize the Moon a great advantage over all other countries, especially militarily. And that alone would allow said country to control all happenings not only on the Moon, but on Earth and eventually in space itself. Do you think I'm kidding...I'm not...for this would be the scenario if Russia were to colonize the Moon before we do...if Putin were to harness the power of one key element found on the Moon...a key element that would make him almost invincible.

One key element holds sway over all...one key element that I mentioned way back in 2014 in my and my Right Side Patriots partner Craig Andresen's Investigative Report, Land Grabs: The Truth Exposed – Part 4. But now that one single element has more serious and deadly ramifications than any previously mentioned elements and that element is helium-3...the stuff of not just balloons but of atomic bombs.

In said Part 4, I wrote about how our government had a long history of maintaining control over our deposits of helium-3 and helium-4. In fact, from 1929 until 1960, the U.S. government was the only domestic producer of helium, at which point the “Helium Act of 1960” became law, thus directing the Secretary of the Interior to acquire and conserve helium using funds borrowed from the United States Treasury. But exactly why was protecting helium so important back then...simply because helium-3 had and still has uses that few were and still are privy to...uses like helium-3 being critical to nuclear power plant operations, while helium-4 is needed as a coolant for magnets critical to magnetic resonance imaging amongst other things.

But here let's concentrate on helium-3, for helium-3 has long been coveted by Putin ever since the Russian space company RKK Energiya announced back in 2006 that they considered lunar helium-3 to be a potential economic resource that would help accelerate both the development of nuclear fusion here on Earth as well as being an important resource in the development of next-generation nuclear propulsion systems.

And why lunar helium-3...because unlike the Earth which is protected by its magnetic field, the Moon has been “bombarded,” if you will, with huge amounts of helium-3 for roughly 4.5 billion years courtesy of the solar winds. And helium-3 is believed to be a safer and faster producer of nuclear fusion energy because there are no neutrons generated as a reaction product and, therefore, the protons that do get generated have “charge,” meaning they can be safely contained using electromagnetic fields. And this helps in eliminating dangerous radioactive waste from being produced...waste that would need to be safely disposed of.

And the process I just described would allow for the use of helium-3 fusion in both atmospheric and underwater nuclear weapons testing. Just think how many more nuclear bombs Russia could produce by being in control of the Moon's helium-3 deposits...just think of how Putin could keep the world gripped in cowering fear.

These facts alone are not lost on Vladimir Putin as they're a motivating factor in Russia's entire space program and possibly even in our own, especially since China already has plans in the works to mine fusion ready helium-3 found on the Moon.

So with both we and Putin already knowing that helium-3 is more abundant on the Moon than on Earth, we both also know that helium-3 has a specific use that could be more beneficial and profitable to life here on Earth in the long run than just the making of nuclear weapons. Remember, as our need for more dependable energy sources grows more critical by the day, and as more and more countries become industrialized, we are always looking for new and better ways to meet those increasing energy needs. And the fact is that helium-3 could well hold the key to the production of basically unlimited clean energy.

How so? Again, the Moon holds the key as we already know that helium-3 exists on the Moon's dusty surface, Neil Armstrong discovered that back in 1969 when he walked the moon's surface, however, it's now been determined that there may be over one million+ tons... yes tons...of helium-3 on and buried just under the lunar surface. And know that one single ton of helium-3 can produce enough clean nuclear fusion power to a power a city of ten million people for one year...that alone is worth colonizing the Moon for, besides it being a highly profitable money making endeavor for the country that gathers and produces said energy.

But how would we extract the helium-3 on the Moon and get it safely to Earth...well it's not as complicated in theory as some might think, even while the cost in dollars at the beginning would be high. First, of course, a manned Moon colony must be established, and then in simple layman's terms said colony must have the proper mechanics in place to be able to heat the lunar dust...the source of helium-3...to around 600 degrees C. Once heated the “extract”...as in pure helium-3 gas...would then be placed in leak proof, what most likely would be metal containers, before being shipping back to Earth on specially designated cargo shuttle ships.

And while such possibilities might be decades away, if the country that was able to do this were to be Russia, Putin or more likely his hand-picked successor, could easily satisfy their lust for war and power for countless years to come...something we cannot and must not allow that to happen.

So where exactly does this now leave us in regards to the Moon? We know our reasons for going back to the Moon...for colonizing the Moon...are quite different than Russia's in regards to profiteering, but we also know that he who controls the Moon does control the Earth. Now add in the fact that on July 29, 1969...a mere eight years after JFK announced our country’s intentions to land on the Moon before the decades end...the then-Soviet Union made light of our achievement while they continued on with their own lunar-landing program while publicly denying its existence. Why so...because with denial comes the fact that Russia would not have to admit losing the “Space Race,” after all “saving face” is and remains as important for the Russians as it is for the Chinese, and is reason enough, in Putin's eyes, to try and put a colony...a manned lunar station...on the Moon before we do.

And the need to “save face” is what has both allowed and propelled Russia to briefly move ahead somewhat in the now race to colonize the Moon. How so... because Russia was able to take advantage of our space program grounding to a halt after the Challenger disaster and the mothballing of our shuttle missions. And while our journey into space continued on with the International Space Station, we were at the mercy of the Russians for we had to “hitch” a very expensive ride each time our astronauts went to the space station and then back to Earth again. But that all changed when NASA teamed up with the private aerospace sector and the likes of Elon Musk and Space X. You can read about the private sector industry's involvement with NASA in my Right Side Patriots partner Craig Andresen's companion article, Hello SpaceX and Dasvidaniya Russia.

So while NASA considers the Moon our “gateway to the universe” as per “NASA’s Plan for Sustained Lunar Exploration and Development,” which outlines our hope of returning to the Moon in 2024, along with colonization for peaceful purposes soon to follow... colonization where the benefits far outweigh the cost... the question remains can a U.S. military base be far behind if said goal is reached? Simply, such a base would not be far behind nor should it be an option taken off the table for like I said in the beginning, he who controls the Moon controls both the Earth and space. And if it's our military who ultimately controls the Moon so be it for the bottom line is that we see the Moon as the hope for mankind's future while Vladimir Putin and his ilk see the Moon as but the means to control and dominate us all. Two different visions for the Moon, but Putin's recent incursion into Ukraine probably says all we need to know. Case closed. 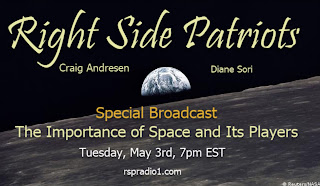 Posted by Diane Sori at 6:50 AM No comments: