Conservative leaders exposing islamic extremism...including jihadi terrorists and proponents of sharia law...are getting blocked and banned across all media sites and except for a few of us there is NO public outcry...we MUST STOP this overt censorship NOW or the outcome for us all will NOT be pretty.
Posted by Diane Sori at 10:07 AM No comments:

“Lately, the SPLC has expanded its bogus ‘hate’ dragnet to include respected conservative leaders exposing Islamic extremism, like Jihad Watch founder Robert Spencer and ex-Muslim feminist Ayaan Hirsi Ali.” Did the SPLC ever see a foe of jihad terror that it didn’t smear as a “hater”? “Here’s how this liberal law center seeks to crush […]
Read in browser » 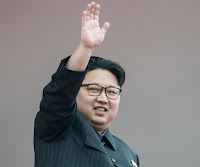 A 6.3 magnitude earthquake in North Korea on Sunday appeared related to a nuclear test, South Korea’s Yonhap News reported, citing the presidential office.
The report comes after an earthquake in the northeast region of North Korea.

A nuclear test would be a provocation that follows successive launches of intercontinental ballistic missiles capable of reaching the U.S. It would be the sixth nuclear test by Pyongyang since 2006 and the first since the U.S. and South Korea elected new leaders.

Tests of ICBMs in July brought Kim Jong Un’s isolated regime a step closer to achieving its aim of being able to deploy a nuclear warhead over the continental U.S. Last Tuesday, Pyongyang fired a missile over northern Japan into the Pacific Ocean.

The news comes just hours after North Korea said it had developed a more advanced nuclear weapon that has "great destructive power" and that dictator Kim Jong Un had inspected a hydrogen bomb that would be loaded on a new intercontinental ballistic missile.

The state-run KCNA news agency said that the hydrogen bomb's power is adjustable to hundreds of kilotons and can be detonated at high altitudes, with indigenously produced components that would allow the country to build as many nuclear weapons as it wants.

Joseph Stalin airbrushed photos to erase the presence of those who had fallen out of favor. Left-run social media titans are doing the very same thing. They are disappearing me.

My website and posts have been scrubbed from Google search.
Fourteen years and over forty thousand posts. Google Adsense has banned my account. Google is blacklisting and has admitted to working with alt-left smear groups to silence opposition. And it’s not just me, it’s all criticism of jihad and sharia.

Facebook has blocked my news-feed. My twitter account is shadowbanned. I have been blocked from uploading videos to YouTube punishment for 2007 video on jihad (and YouTube demonetized all of my videos). Paypal suspended me until an outpouring of condemnation and outrage forced a reversal.