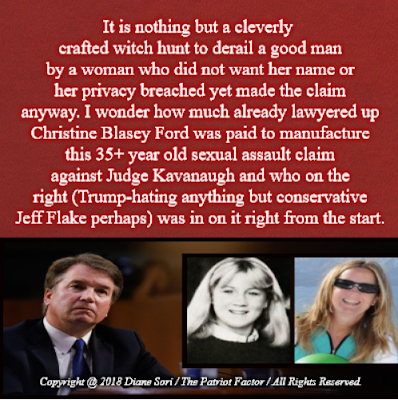 Here’s Why The Revelation Of Judge Kavanaugh’s Accuser Was Inevitable, And Why It Still Means Nothing

The opinions expressed by columnists are their own and do not represent the views of Townhall.com.
Ever since rumors began swirling on Capitol Hill about a mystery letter in the possession of Democratic Senator Dianne Feinstein, it was only a matter of time before Judge Kavanaugh’s formerly “anonymous” accuser made her grand entrance to the national stage.

After all, Democratic attempts to delay, interrupt, grandstand, and even “Spartacus” their way out of replacing former Justice Anthony Kennedy with a conservative jurist of President Trump’s choosing had thus far been unsuccessful, so why not pull out the old classic “Anita Hill” tactic? It may or may not work, but Dems are just trying to run out the clock at this point, right?

And it was becoming all too clear that “anonymous accuser” wasn’t going to cut it, not with so much at stake.

Enter Christine Blasey Ford, the as-of-Sunday no-longer-anonymous (and already lawyered-up) Kavanaugh accuser who contends that the then-prep-school student - as The Washington Post reported - “pinned her to a bed on her back and groped her over her clothes, grinding his body against hers and clumsily attempting to pull off her one-piece bathing suit and the clothing she wore over it. When she tried to scream, she said, he put his hand over her mouth.”
Read more »
Posted by Diane Sori at 7:21 AM No comments:

Since its inception fourteen hundred years ago, Islam has been at war with the people of this planet. Millions of people have been butchered with the sword of Islam and by the savages of Arabia. The conquerors wished to make Islam the favored system of culture, faith and allegiance, utterly destroying other powers. And so, […]
Read in browser »

American patriots should be extremely concerned about Bernie Sanders. That is because Bernie Sanders can win a presidential election. The suicidal agenda of Bernie Sanders continues to remain largely unchallenged. Bernie Sanders (with the help of the media, academic, and Hollywood elites) has successfully re-branded socialism. Socialism and anti-Americanism is now accepted in many segments of American society. It’s cool to many millennials as well. Look at what is happening in Florida and Texas. Ted Cruz and Ron DeSantis are in a knife fight against two socialist candidates, despite being in states that traditionally elect conservative candidates.

If Bernie Sanders is elected President, there may be no turning back. A President Sanders will have an open border policy, to ensure a socialist Democrat majority forever. A President Sanders will attempt to eliminate America’s free enterprise economic system in favor of socialism. Leftist and Marxist politicians like Bernie Sanders have ruined Western Europe, Brazil, Venezuela, and many other once prosperous countries. Don’t think that can’t happen to America.

Read entire article here: https://gellerreport.com/2018/09/sanders-second-run.html/
Posted by Diane Sori at 7:09 AM No comments: