Today is D-Day. Remember and honor those brave warriors always because if NOT for them the world...and our beloved America...
would be a vastly different place today and NOT in a good way. 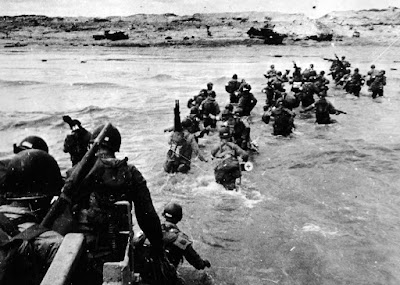 Posted by Diane Sori at 1:24 PM No comments:

Who is feeding Vermont Sen. Bernie Sanders’ campaign? Who are these people who have managed to spike the blood pressure of the Clinton political machine? For most, the areas in which Sanders’ small donors live won’t surprise anyone. They live in some of the most liberal parts of the country and in zip codes where the proportion of college graduates is high. It’s these people who have fed the self-described Democratic socialist’s army, filling his war chests in the hopes that he can accomplish the political revolution he clamors about on the stump.

The Los Angeles Times was able to analyze these people since the Sander campaign uses ActBlue, a fundraising tool (required by federal law) that discloses donors no matter how small their donation.

Lastly, the Times noted that many in Sanders’ army view him as authentic, trustworthy, dependable, and straightforward—characteristics that Hillary Clinton has failed miserably in trying to convey to the masses, especially as her email fiasco gets worse. It also doesn’t help that she refuses to release the transcripts of speeches she made to Wall Street banks, but we digress. Here are the folks who have given Sanders over $200 million in small donations this cycle:

Writer David French will not be launching an independent run for president. French had previously been put forward as the "Never Trump" alternative candidate by Weekly Standard editor Bill Kristol, but has decided against an official run.

According to French, the timing and circumstances were just not quite right for a presidential run.


But given the timing, the best chance for success goes to a person who either is extraordinarily wealthy (or has immediate access to extraordinary wealth) or is a transformational political talent. I’m grateful for the opportunity to serve my country, and I thank God for the successes I’ve had as a lawyer and a writer, but it is plain to me that I’m not the right person for this effort.

I believe with all my heart that there is an American movement ready to both resist the corruption, decadence, and dishonesty of the American elite and restore the promise of the American Dream. But that movement may not emerge for some time, and it might emerge only after further heartache and pain.

Here is yet another indication of the abject inability of authorities (contrary to their claims) to vet Muslims and determine whether or not they are jihadis. There is, in the first place, no way to do this, since both the Islamic State and al-Qaeda have instructed jihadis to appear to be secular and trigger no […]

There are moments in history you can point to and say, there it is a defining moment when everything changes, when the order of the world is overturned. The assassination of Archduke Franz Ferdinand and his wife, Sophie, the Nazi annexation of Czechoslovakia, and so on.

President Jimmy Carter’s betrayal of our ally in Iran, the Shah, is such a moment. We had such a brilliant, strategic ally in the Shah, one has to wonder just how stupid and dangerous was Jimmy Carter. Very. The Democrats — they never fail to fail us, every time.

Ambassador John Bolton has been singular and relentless in his work both for President Bush and after, to oppose the rise of the vicious and duplicitous Islamic regime in Iran. His warnings and...