BREAKING NEWS...the California mass shooter has been iD'd as 28-year old Ian David Long...a marine possibly suffering from PTSD according to reports now coming in. Our returning warriors desperately need help as too many are suffering the ravages of the horrors of war and unfortunately 12 innocent people got killed last night...and the shooter shot himself to death...as another vet slipped through the broken VA system. 😪 But make NO mistake...the shooter alone is responsible for his actions. 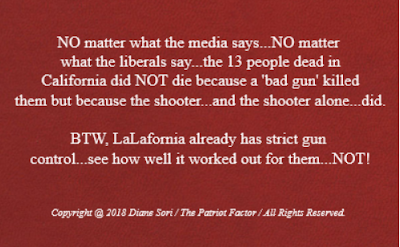 Posted by Diane Sori at 9:36 AM No comments:

According to The Daily Wire:

Acosta brought up how Trump had called the caravan an "invasion," to which the president doubled-down and said, "I consider it to be an invasion."
...
Acosta tried to explain why he thinks the caravan was not an invasion to which Trump responded: "Thank you for telling me that information."

Acosta then falsely implied that Trump tried to demonize immigrants during the election, when, in reality, Trump's campaign message when focused on illegal immigration.
...
"I think you should let me run the country and let you run CNN, " Trump said. Trump said, blasting Acosta. "You shouldn’t be working for CNN. The way you treat Sarah Huckabee is horrible. And the way you treat other people is horrible. You shouldn’t treat people that way."

President Trump tells CNN's Jim Acosta to sit down: "When you report fake news, which CNN does a lot, you are the enemy of the people." https://t.co/X38nyefXC9 pic.twitter.com/MDtQITSCqZ
— CBS News (@CBSNews) November 7, 2018

Trump has had his differences with CNN and he makes them known to the American public. But this may have been his best exchange with CNN yet.
Posted by Diane Sori at 8:25 AM No comments:

“Why can we call the Democrats taking the House this early?” Fox News anchor Bret Baier asked analyst Chris Stirewalt. “Because we’re just that good,” Stirewalt replied with a proud smirk.

That just about sums up Fox’s election coverage of the 2018 midterms. It was a self-indulgent display of self-promotion, bickering, and irresponsibility as the entire House was called before polls in the western part of the country had even closed. One has to wonder how many people were deterred from voting when they heard Republicans had already lost the House.

There was a time when news media covered elections without needing to be the first horse out of the gate with results. Reporters would patiently wait for polls to close, for the numbers to be tallied, and for a clear winner to be tabulated. That changed with exit polling and guesses about whether these reflected what really happened inside the voting booths.

Last night, Fox News jumped the shark. They had a new system they claimed would deliver unprecedented accuracy -- they used voters’ surveys along with the AP’s race results to predict outcomes. With this methodology, they called the House before anyone else -- to the anger of many viewers.
Read more »
Posted by Diane Sori at 8:22 AM No comments: 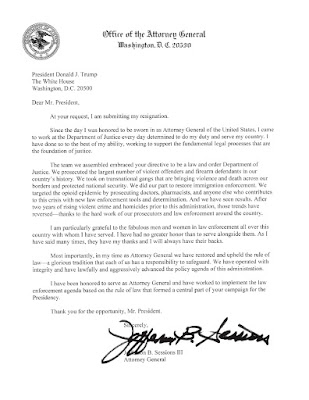 “At your request, I am submitting my resignation,” Sessions wrote to the president Wednesday.

The president tweeted that Matthew Whitaker, who currently serves as chief of staff to Sessions, will become the acting attorney general.