For the naysayers...take a look at this coin...it was found on the Temple Mount in Jerusalem and is dated to be from the year 67 A.D. during the time of the Second Jewish Temple. The words ‘Jerusalem the Holy’ are written on it. In the year 632 A.D. islam and muslims were invented by a man of dubious character who craved power, wealth, and fame. Do the math...proof positive that both Jerusalem and Israel herself belongs solely to the Jews...period.
Posted by Diane Sori at 8:59 AM No comments:

White House Press Secretary Sarah Sanders was vocal on Twitter Sunday, issuing biting criticism of former President Barack Obama. In Sanders’ typically blunt vernacular, she claimed that President Obama did not deserve any credit for the apparent improvement in the economy. However, while the economy is doing well and Trump largely deserves praise, Americans would be wise to pay attention the labor force participation rate. 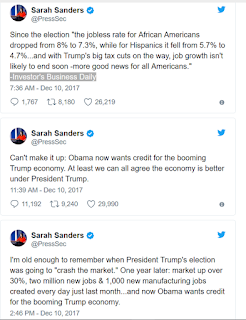 Indeed, many critics were worried that the economy would fail miserably under President Trump. Liberal New York Times columnist Paul Krugman predicted economic ruin with no end in sight under the new president. Specifically, he said that the markets would “never recover” thanks to Trump.


“It really does now look like President Donald J. Trump, and markets are plunging. When might we expect them to recover? If the question is when markets will recover, a first-pass answer is never," he wrote.

“We are very probably looking at a global recession, with no end in sight. I suppose we could get lucky somehow. But on economics, as on everything else, a terrible thing has just happened.”

This, of course, has proven to be false.

Email ThisBlogThis!Share to TwitterShare to FacebookShare to Pinterest
Trump: “We’ve already started the process” of ending Visa Lottery that allowed NYC jihad to enter US

Human rights or human wrongs. Today is the day that the UN adopted the Universal Declaration of Human Rights in 1948. “All human beings are born free and equal in dignity and rights.”

Born after the ashes of World War II and established to ensure that a Holocaust would never happen again, the Universal Declaration of Human Rights will turn 70 today.

The Universal Declaration of Human Rights (UDHR) is a milestone document in the history of human rights. Drafted by representatives with different legal and cultural backgrounds from all regions of the world, the Declaration was proclaimed by the United Nations General Assembly in Paris on 10 December 1948 (General Assembly resolution 217 A) as a common standard of achievements for all peoples and all nations. It sets out, for the first time, fundamental human rights to be universally protected and it has been translated into over 500 languages.