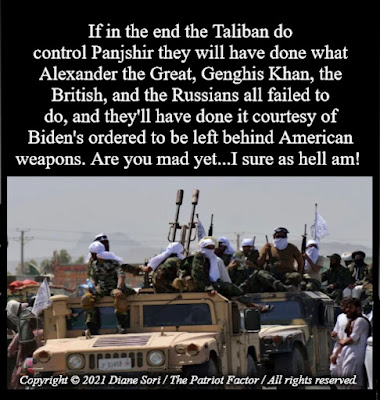 Posted by Diane Sori at 1:40 PM No comments:

It's over...or is it. Only time will tell but for now American troops have come home not in tangible defeat per se for we were not militarily defeated, but defeated in that their “sense of purpose” was negated by the powers that be who would not allow them to fight to win. Winning “hearts and minds” once again prevented our troops from rendering the enemy dead, just like it's politics alone that sees us leaving American citizens behind to face what is an unthinkable fate with the media still not calling the guilty to task.

But before I get into that let's turn the clock back a bit to roughly two weeks ago when President Trump was still being blamed by Mr. “Blood on his Hands” Joe Biden for the Afghan debacle. Two weeks ago when America's heroes bravely fought on in the guise of an all-volunteer group of U.S. Afghan veterans who launched a daring and dangerous mission behind Biden's and the State Department's back...a mission they called the "Pineapple Express"...to not only bring some of our “at-risk” Afghan allies and their families to safety, but who “unofficially” worked with our military to get these folks into Kabul's airport and onto planes leaving the country. In fact, this mission was actually underway during the suicide car bomb attack at the airport that left over 200 people dead...including 14 members of our military...13 killed instantly and another dying from his wounds...and close to 200 Afghans who desperately wanted to get out before their country was under total Taliban control.

And while some of those who made it into the airport were injured during that terrorist attack, with possibly even a few of them being amongst the now dead, in this case the media gave little mention to the heroic actions of these brave Afghan War veterans who risked their lives to help those who had helped them. Sad indeed but not unexpected from a leftist media all snuggled up cozy in the Democrats anti-America pocket.

But the media, in an all out effort to cover for Joe Biden's self-made withdrawal disaster, did make it 24/7 news when in retaliation for said airport attack, a U.S. drone attack in Afghanistan's Nangarhar province near the Pakistan border, took out two ISIS-K terrorists...one a “planner” and the other a “facilitator.” And then two Saturday's ago, another military drone struck a vehicle in a residential neighborhood of Kabul...a vehicle packed with explosives...preventing what was intel deemed to be an imminent attack on the airport by yet another ISIS-K suicide bomber...another propagandized media coup committed by the most extreme and violent of all the jihadist militant groups now operating in Afghanistan.

And while coverage of these limited in scope retaliations is better than no retaliations at all, they do not make up for all of those killed at the airport nor does it excuse the Fourth Estate for not reporting the truth about Joe Biden's disaster of a withdrawal...a withdrawal that should never have happened...along with their defending and trying to makes excuses for Biden's show of disrespect when the bodies of our 13 brave warriors returned home. After all, Joe Biden kept looking at his watch as if bored while never once taking off his mask to at least show a modicum of respect for those whose deaths add even more blood to his already bloodied hands.

“The Taliban saying is 'you have the watches, but we have the time.' What a sad piece of evidence that that is more true than ever before. …Many of them said he didn't just do it once, he did it with almost every single family, as if ‘come on folks, is this over yet?”             - Afghan Army veteran and 'Fox & Friends Weekend' co-host Pete Hegseth

So if Joe Biden thinks that a few dead terrorists coupled with our troops being forced to depart from what should have been a winnable theater of war will now wipe some of that blood off his hands...it does not...just like it didn't when he was Obama's VP during the Benghazi fiasco.

And with the mainstream media and numerous Pentagon officials continuing to throw a blanket over Joe Biden's ineptitudes as well as his ineffective presidency, they also ignore facts that equate to his “aiding and abetting” the enemy. And those actions include not only his giving the Taliban a list of American citizens and Afghan allies that “needed to be granted entry into the outer perimeter of the airport,” but the fact that Biden in his capacity as commander-in-chief, along with Gen. Kenneth McKenzie, commander of the U.S. Central Command, went along with the Taliban's putting the Haqqani network's Khalil Haqqani...a U.S. designated terrorist with a $5 million bounty on his head...in charge of security in Kabul itself and at the airport. And known to Biden, or at least it should have been, is that the Haqqani network has a long history of working with al-Qaeda...the very terrorist group Biden erroneously claimed was no longer in Afghanistan.

Simply, a U.S. president and a top general actually tasked the enemy with handling security at the very airport where now 14 U.S. troops and almost 200 Afghans were killed by an ISIS-K suicide bomber.... traitorous actions indeed.

Continued military blunders of the very worst kind, including Biden's declining the Taliban's offer to have U.S. troops control Kabul during the evacuation coupled with what was “reckless endangerment” of both our military and American citizens, will now and forever be Joe Biden's legacy...the legacy of a man both mentally and physically incapable of being Commander-in-Chief. And this should be obvious to all and not be a partisan driven issue, as both Republicans and Democrats should demand that the leader of the “free world” portray strength, power, and clear and logical thinking to help reassure those in harms way that American ideals are worth fighting for. But with Biden not being cognizant enough to know simple right from wrong, it was easy for his puppet master to manipulate him into giving the Taliban...the enemy...what amounted to a “kill them now” or “round them up to be hostages later” list of those persons he obviously deemed to be “disposables.”

And Biden's claim that this, what was a most foolish of strategies, was not just the best way to keep both Americans and Afghans safe but would help to expedite the evacuation of tens of thousands of people, also saw him claiming that this action alone would prevent a “shooting war” between Taliban fighters and U.S. troops. Really Joe, I think not for only those disloyal to our country would dare dream up...read Obama here...and then get a weak mind to initiate such nonsense.

And why do I say this...because there's no other reason for an American president and his top military brass to not only supply the Taliban with the names of our people; to share intelligence information with those we are at war with; and to have our military leave Bagram Airfield...our key base of operations in Afghanistan...in the dead of night without notifying the Afghans...while at the same time leaving most of our military equipment behind making it ripe for the Taliban's picking. And pick they did as the Taliban are now, according to some reports, “hiring” under threat of killing their families, former Afghan army pilots to fly their now appropriated U.S. Black Hawk helicopters from which they're hanging their fellow Afghans still loyal to the Ghani government or those unfortunates who were left behind after having aided our U.S. military.

And even Joe Biden, deep in the throws of dementia, has to know on some level that in his aforementioned “aiding and abetting” of the enemy, that he is not the one running the show for he is mentally not capable of coming up with the very decisions that sold our country out. And while in his almost 50-year political career Joe Biden was always power hungry and greedy, I never before thought of him as a traitor while I always considered Obama to be just that...a traitor with an anti-America agenda who latched onto the one man he could unequivocally control.

Come on folks you know this as well as I do for what we see unfolding with our military coming home in defeat tells us all we need to know for no true patriot no matter their party would ever allow this Afghanistan nightmare to have happened. And the media knows this as truth and has known it all along, yet they became willing accomplices in America's fall. In fact, one case in point can be seen via a June interview with New York Times columnist Ezra Klein, where Obama himself clearly stated that he sees Joe Biden as a “continuation of his own presidency,” and that “Joe and the administration are essentially finishing the job”...the job of destroying America from within that is. And with the majority of what was Obama's people continuing to work within the Biden administration, Obama's socialist, anti-America, and military defaming policies continue on with Biden's grossly mismanaged withdrawal from Afghanistan proving just that.

And while Obama is not be the visible “front man,” even though he's actually hiding in plain sight, know he is the puppet master for it was he who withdrew almost all U.S. troops from Afghanistan when as president he did so with little to no regard for Afghan’s security, the resurgence of the Taliban or for the expansion of ISIS. So while Obama did not finish his hoped for task Joe Biden is “finishing his job.” And it's a job started when as president, Obama made nice to the Taliban with his announcing our first date of withdrawal back on June 22, 2011, thus making it he and he alone who set the stage for the Taliban's ultimate return to power with Joe Biden bringing down the curtain so to speak, what with his announcing our nonnegotiable August 31st withdrawal date for the whole world world to hear.

So now as the massive airlift out of Afghanistan is over and done, with as many Americans as “who wanted to leave” having left...Joe Biden's lying words constantly being mimicked by the media...we leave behind an unknown number American citizens, a large number of our Afghan allies, a number of British nationals, and many others including some of our brave, hard working, four-legged civilian canine warriors who served at America's side in the "War On Terror"...a war that still sees no end in sight.

And with Biden's recent ever so misguided words that it was time to "turn the page" on the U.S. role abroad and turn it towards a "less interventionist future" thus "ending an era of major military operations to remake other countries"...I guess bringing freedom and democracy to oppressed people is to Joe Biden not a worthy task. But the saddest thing of all is that our mission in Afghanistan ended as it began with the Taliban in control.

May God Bless our military who truly fought a good and righteous fight...may God Bless and keep safe those Americans and Afghan allies left behind. Case closed.

Tomorrow, Tuesday, September 7th, from 7 to 8:30pm EST, RIGHT SIDE PATRIOTS Craig Andresen and Diane Sori discuss 'Leaving Americans and Others Behind'; 'A Coup From Behind the Curtain;' and important news of the day.