SAGINAW, Mich. – For months we have heard about the "Silent Majority," the idea that the majority of our nation are conservative, law-abiding citizens who support President Trump. These Americans care about issues like jobs and the economy. They support law enforcement, disagree with Black Lives Matter rioters and, by and large, want government to stay out of their lives.

In Central Michigan, the "Silent Majority" is alive and well. The problem, however, is they're silent because they're afraid of being retaliated against.

"They know they can be humiliated and, probably, a little bit afraid of these activists coming in and doing some damage to their house and they don't want to make that statement," a 60-year-old Bay City woman said, referencing Black Lives Matter rioters.

Sen. Cory Gardner, a Republican in a tough reelection race in a swing state, said Monday he supports moving forward on a Supreme Court nomination to fill the vacancy left by Ruth Bader Ginsburg, significantly lowering Democrats’ chances of stopping the process until after the November election.

Gardner, who is facing a re-election challenge from former Gov. John Hickenlooper in Colorado, was viewed as one of the last potential holdouts that could halt the Senate from voting to approve President Donald Trump’s nominee to the high court. But a statement Monday evening made clear he will support moving forward in the process, likely leaving Republicans the votes to clear a nominee even if such a process comes before the November election.

Hope you can tune in to RIGHT SIDE PATRIOTS on our website rspradio1.com Click 'LISTEN LIVE' starting at 6:50 pm EST with the show beginning at 7pm EST. 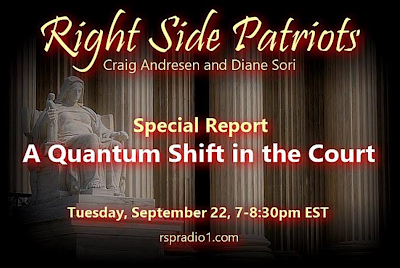 Posted by Diane Sori at 6:17 AM No comments: