...Why are we Republicans and we Conservatives allowing the Democrats to call their maliciously orchestrated "witch hunt" against President Trump an “impeachment” instead of calling it what it is now and has always been...as in a tried for “political coup”...
Read entire article and see video here: https://thepatriotfactor.blogspot.com/2019/09/op-ed-whistleblowers-complaint.html
Posted by Diane Sori at 7:44 AM No comments:

What An Idiot: Dems Want to Impeach Trump But Schumer Expects Him to Work With Them On Gun Control
Beth Baumann / Townhall Tipsheet

“Amidst the impeachment inquiry the gears of government can still move. Anyone who suggests otherwise is advancing a false narrative,” Schumer said at his Manhattan office on Sunday, the New York Post reported. “In fact, the best example of governing for this president … would be to pass the universal background bill, which has been sitting on the door step of the Senate for well over 200 days.”

Nerdmeister General , Mark Zuckerberg, has cracked. Utterly and completely.
Anything Jewish is blocked, banned, censored in some form of anything. Anything Islamic is promoted – jihad, sharia etc. @Facebook created over 100 pro-ISIS pages.

Today, Tuesday, October 1st, from 7 to 9pm EST on American Political Radio, RIGHT SIDE PATRIOTS Craig Andresen and Diane Sori
discuss in detail 'The Whistleblower Scandal'...from the phone call...to the complaint...to the recent House Intelligence Committee hearing...to all its ramifications and fallout. 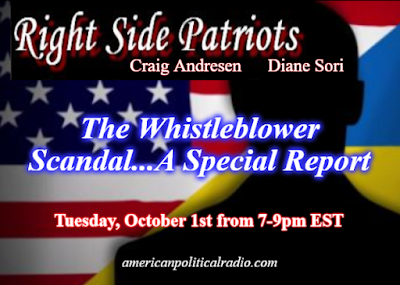