Those ill during the days of Ellis Island were NOT allowed into our country...why should they be let in now...they shouldn't be. 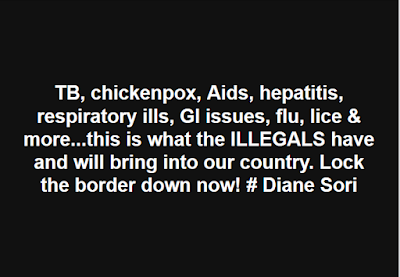 Sen. Cindy Hyde-Smith (R-MI) won her runoff election last night over Democrat Mike Espy in Mississippi, so Republicans have a solid 53-47 majority. No longer will we have to deal with the Murkowski-Collins question when it come sot tight votes of judicial and Supreme Court nominations. We can run the table on paper, but we have a Sen. Jeff Flake (R-AZ) problem. Yeah, Mr. Flake, the perpetual pain in the rear end of the Senate GOP, isn’t budging from his position of blocking Trump’s judicial nominees until a vote on a bill to protect Special Counsel Robert Mueller and the Russia investigation is brought before the Senate floor.

His antics caused the Senate Judiciary Committee to cancel tomorrow’s hearing to advance 21 judicial nominees. Flake is the deciding vote on that committee, and he’s starting to annoy the hell out of his Republican colleagues. Efforts to appease him seem to be a fool’s errand as binding legislation to protect Mueller is the only thing that will cause him to reverse course on his obstructionism over judicial nominees (via Politico):

As part of the UN Migration Pact,  signatories are required to “commit to eliminate all forms of discrimination” with measures including state promotion of “diversity”, prevention of “hate speech” and opening up of welfare systems to illegal immigrants, was written in such a way that it would create a legal framework.” Sensible nations are rejecting the […]
Read in browser Â»

What the Democrat party did to subvert the presidential election is high treason. Watergate was nothing compared to this.

EXCLUSIVE: ‘If the shoe were on the other foot, it would be treason.’ Trump rips into Obama’s administration for ‘spying’ on his campaign, telling Corey Lewandowski in AUDIO RECORDING the former President knew about surveillance

Read entire article here: https://gellerreport.com/2018/11/democrat-treason-trial.html/
Posted by Diane Sori at 8:17 AM No comments: