More than 19 million people living within the United States are not fluent in the English language, according to a recent report by the Brookings Institution. That translates to one out of every ten people. While stores such as Wal-Mart and even campaign ads such as those coming from Sen. Mark Udall (D-CO), cater to Spanish speakers, the study suggest feeding this improficiency could hurt economic growth.


English proficiency is a strong predictor of economic standing among immigrants regardless of educational attainment. Numerous studies have shown that immigrants who are proficient in English earn more than those who lack proficiency, with higher skilled immigrants reaping the greatest advantage.

Conversely, high-skilled immigrants who are not proficient in English are twice as likely to work in “unskilled” jobs (i.e. those requiring low levels of education or training) as those who are proficient in English. This underemployment represents a loss of productivity that yields lower wages for individuals and families and lower tax revenues and consumer spending for local areas. LEP immigrants also have higher rates of unemployment and poverty than their English proficient counterparts.

Moreover, higher proficiency in English among immigrants is associated with the greater academic and economic success of their children. English skills also contribute to immigrants’ civic involvement and social connection to their new home.

Individuals without English proficiency earn an average of 25 to 40 percent less than their more acclimated counterparts, according to the report.

Jill H. Wilson, Brookings senior research analyst and associate fellow, even went so far as to assert that:


“English proficiency is the most essential means of opening doors to economic opportunity for immigrant workers in the United States.”

If these claims are true, pandering to the language deficiency is not only harming the economic growth of the United States, it is abating the so-called ‘opportunity gap’ between immigrants and natives of this country.

PPP polls always have a "(D)" behind it to alert readers that it is a Democratic shop, and its polls could well reflect bias.

So when their latest has Tom Cotton 6 points atop incumbent (and invisible) Mark Pryor, the bell is tolling for Pryor.

As it should, given Pryor's 97 percent support of President Obama. Congressman Cotton is fond of listing the places throughout Arkansas where he has campaigned, looking for an Arkansan who agrees with the president 97 percent of the time and has been unable to find him --outside of D.C. and Senator Pryor's office.

There is also good news this morning for Dan Sullivan in Alaska, with Sullivan up 3 in a PPP(D) poll.

Cotton --his campaign website is here-- and Sullivan --whose campaign website is here-- are both veterans of the war on terror, and it makes sense that as voters watch the meltdown of the president's foreign policy and the spread of IS across the Middle East that they will value having combat vets in the Senate. Iowa Army National Guard Lt. Col. Joni Ernst will also benefit from the sudden sobriety in an electorate that has figured out that the president was clueless about the "jayvees" of ISIS as he was about "leading from behind" for his five-plus years in office.

As news spreads today that the president's vaunted coalition is actually more of a facade than a serious set of allies, recognition will increase that the president is trying to use tricks to cover the reality that the U.S. has been asleep at thenational security switch for many years, the consequence of a president in love with his Nobel Peace Price and dreams of a world that doesn't exist. Digging out of this hole will be a long process as it is as deep as the one dug by Bill Clinton's fecklessness in the '90s and chronicled by Lawrence Wright in The Looming Tower.

Whether Scott Brown in New Hampshire, Thom Tillis in North Carolina, Terri Lynn Land in Michigan, Ed Gillespie in Virginia, Bill Cassidy in Louisiana, or Cory Gardner in Colorado, voters are getting their absentees next week and beginning their early voting just as the country as a whole recognizes that the price of an amateur ideologue in the White House and Harry Reid and Nancy Pelosi in the Senate and House is deep instability and growing danger.

The most recent debate between Gardner and his lockstep-with-Obama opponent Mark Udall turned on national security, and suddenly all across the country Democrats like Udall are having to defend their long time, rote defense of an administration that has defined forever fecklessness on national security and which has sliced Pentagon budgets and the nation's military far beyond the bone. As Congressman Rob Wittman --Chairman of the Congressional Shipbuilding Caucus-- told me Monday, their is a growing recognition that there needs to be a huge "plus-up" in defense spending immediately, but only a GOP majority in the Senate will guarantee that this most anti-defense of president and reckless of senators Harry Reid will be obliged to get out of the way of the nation's national security needs.

The backdrop of failures in Obamacare and tremors in the economy -especially housing-- add to Democratic woes, but the generic ballot polling represents one thing more than anything else: The president and his Democratic allies have not been taking care of the common defense. And voters know.

They are going to vote for seriousness on ISIS, Russia the PRC and all things national security related. That is great news for Republicans who have regained their long-standing and deserved edge among voters for responsibility on such matters.From AP's Donna Cassata:

Just 41 percent approve of Obama's handling of terrorism while 50 percent disapprove, according to last week's New York Times/CBS poll , which gave the president worse marks than Republican President George W. Bush in 2006. At the same time, Republicans had a hefty double-digit advantage of 52-31 percent on the question of which party is more trusted in dealing with terrorism and a 49-37 percent edge on foreign policy.

President Obama and his congressional allies are about to reap the political whirlwind they have sowed. Pray the country doesn't have to reap at home the consequences of negligence abroad for the past six years.
Posted by Diane Sori at 11:47 AM No comments: Links to this post

Islamic State jihadis advance in Syria despite US strikes

The airstrikes are meant to save Obama’s poll ratings, and the Democrats’ prospects in November. They are not meant to do any serious damage to the Islamic State, and they are not doing any.


(Reuters) – U.S. and coalition planes pounded Islamic State positions in Syria again on Wednesday, but the strikes did not halt the fighters’ advance in a Kurdish area where fleeing refugees told of villages burnt and captives beheaded….

The U.S. military confirmed it had struck inside Syria northwest of al Qaim, the Iraqi town at the Albu Kamal border crossing. It also struck inside Iraq west of Baghdad and near the Iraqi Kurdish capital Arbil on Wednesday.

An Islamist fighter in the Albu Kamal area reached by phone said there had been at least nine strikes on Wednesday by “crusader forces.” Targets included an industrial area….

Even as Islamic State outposts elsewhere have been struck, the fighters have accelerated their campaign to capture Kobani, a Kurdish city on the border with Turkey. Nearly 140,000 Syrian Kurds have fled into Turkey since last week, the fastest exodus of the entire three-year civil war.

An Islamic State source, speaking to Reuters via online messaging, said the group had taken several villages to the west of Kobani. Footage posted on YouTube appeared to show Islamic State fighters using weapons including artillery as they battled Kurdish forces near Kobani. The Islamists were shown raising the group’s black flag after tearing down a Kurdish one….

Posted by Diane Sori at 11:43 AM No comments: Links to this post

Email ThisBlogThis!Share to TwitterShare to FacebookShare to Pinterest
Muslim Brotherhood in Syria Comes to Defense of ISIS
By Shoebat Foundation

The inter-relational dynamics between separate Sunni Muslim groups is very difficult for westerners to understand. Consider the relationship between ISIS and Muslim Brotherhood spiritual leader Yusuf al-Qaradawi. When ISIS front man Abu Bakr al-Baghdadi declared himself Caliph of an Islamic State, al-Qaradawi denounced him; ISIS then denounced the Muslim Brotherhood, as Shoebat.com reported.

Yet, the Muslim Brotherhood in Syria is reportedly standing by ISIS:


A Syrian Muslim Brotherhood spokesman says attacks on the Islamic State by the United States and its allies are not the answer.

“Our battle with ISIS is an intellectual battle,” Omar Mushaweh said in a statement published Sept. 9 on the Syrian Brotherhood’s official website, “and we wish that some of its members get back to their sanity, we really distinguish between those in ISIS who are lured and brainwashed and they might go back to the path of righteous, and between those who has foreign agendas and try to pervert the way of the [Syrian] revolution.”

Rather, the first target for any Western intervention should be dictator Bashar al-Assad’s regime, Mushaweh asserts, according to a translation of his comments by the Investigative Project on Terrorism.

Such comments should reinforce Western concerns about the Syrian Brotherhood, whose members are prominent among the Free Syrian Army (FSA), one of the supposedly moderate factions in the Syrian civil war which receive U.S. training and weapons. And it shows the challenge of finding truly moderate allies on the ground in Syria. Compared to ISIS, the FSA might be considered moderate. Then again, ISIS was so ruthlessly violent that al-Qaida disavowed the group in February.

In addition, the Syrian Brotherhood openly mourned the death last week of a commander in Ahrar Al Asham, a Syrian faction with ties to al-Qaida.

The duel between al-Qaradawi and al-Baghdadi has primarily been about turf, means, timing, and size of a caliphate. Al-Qaradawi has a much larger vision – an Ottoman caliphate.

Speaking of al-Qaradawi, he doesn’t support U.S. military action against ISIS, which indicates that he too is more concerned with removing Assad:


Yusuf Al Qaradawi, an influential Brotherhood cleric living in Qatar, joined in criticizing the American military campaign against ISIS. “I totally disagree with [ISIS] ideology and means,” he wrote on Twitter, “but I don’t at all accept that the one to fight it is America, which does not act in the name of Islam but rather in its own interests, even if blood is shed.”

While both are Sunni Muslim movements, each seeking to establish a global Islamic Caliphate, ISIS views the Brotherhood as too passive, while the Brotherhood sees ISIS as being unnecessarily violent in pursuing its aims.

The nexus between the larger Muslim Brotherhood, its Syrian branch, and groups connected to it in the U.S. seems to come together at the notorious Dar al-Hijrah mosque in Falls Church, VA. Last year, as IPT points out, a man who spoke there last year – Hassan Al Hashimi – mourned a man with very close connections to al-Qaeda.

Read More here.
Posted by Diane Sori at 12:21 AM No comments: Links to this post

Email ThisBlogThis!Share to TwitterShare to FacebookShare to Pinterest
Wishing all my blog followers of the Jewish faith a very
Happy and Healthy New Year
*5775* 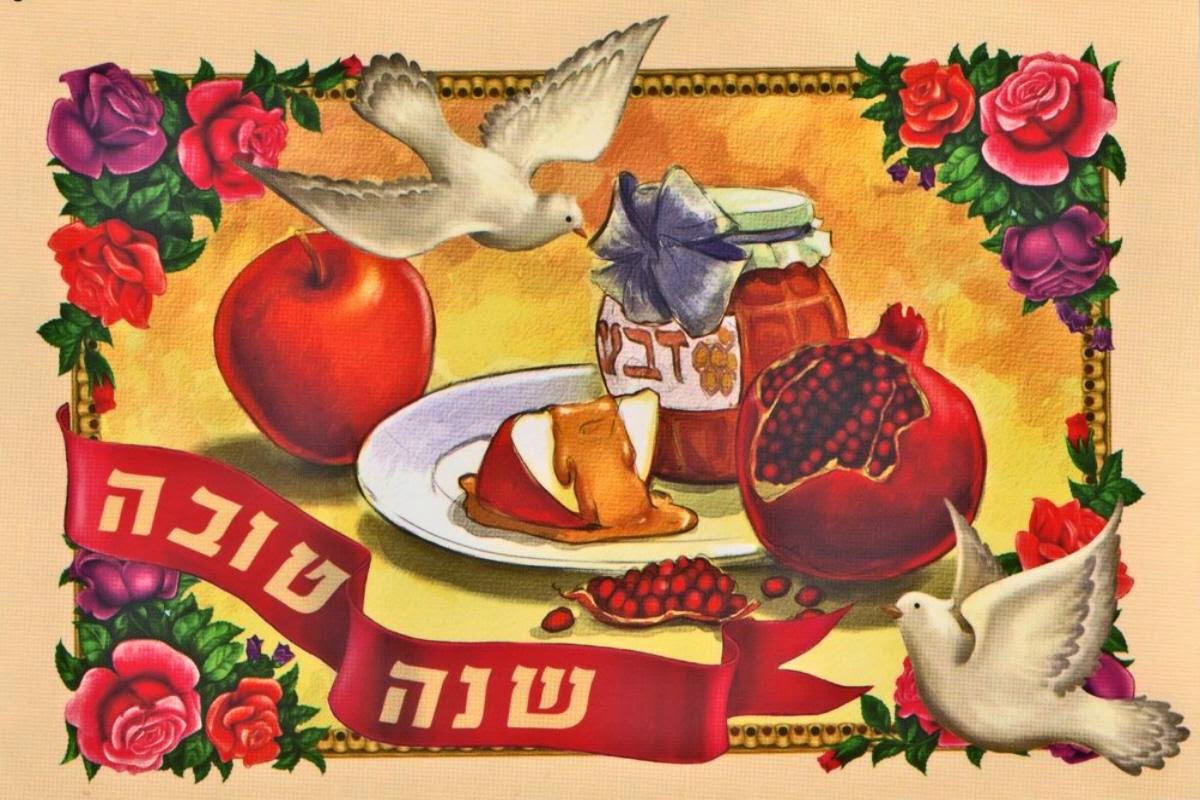 Posted by Diane Sori at 12:00 AM No comments: Links to this post