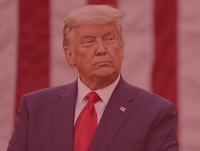 Two lawyers, David Schoen and Bruce L. Castor, Jr. will defend the president in his second impeachment as Democrats lay out what is sure to be a case built heavily on emotions. Schoen has already hit the ground running, working with the former president and his current advisors in preparation for the upcoming trial.

Both lawyers agree the current impeachment case is unconstitutional.

"I consider it a privilege to represent the 45th President," said Castor. "The strength of our Constitution is about to be tested like never before in our history. It is strong and resilient. A document written for the ages, and it will triumph over partisanship yet again, and always."

"It is an honor to represent the 45th President, Donald J. Trump, and the United States Constitution," said Schoen.

The State Department’s newly installed deputy spokesperson, Jalina Porter, said in a 2016 Facebook post that the “largest threat to U.S. national security are U.S cops,” according to a screenshot of the post obtained by the Washington Free Beacon.

“The largest threat to U.S. national security are U.S. cops,” wrote Porter, who was recently tapped by the Biden administration to serve as State Department spokesman Ned Price’s deputy. “Not ISIS, not Russian hackers, not anyone or anything else.”
Porter’s comments were made on Sept. 20, 2016, and appear to be in reference to video footage released that day of an unarmed black man being shot by police officers in Tulsa, Oklahoma. “An unarmed Black man takes a knee for justice, bigots riot,” she wrote in the post. “An unarmed black man (with his hands raised) takes a bullet and dies, these same bigots are silent. Explain this to me, please.
Read more and see screenshot here: https://gellerreport.com/2021/01/beijing-%e2%98%ad-bidens-new-state-dept-spox-largest-threat-to-u-s-national-security-are-u-s-cops.html/
Posted by Diane Sori at 7:22 AM No comments: