Op-ed:
A War We Should Have Won
By Diane Sori / The Patriot Factor / Right Side Patriots / Right Side Patriots Radio
...our military presence in Afghanistan helped in assuring that no regional vacuum of power would be created...like the one Obama created a few years back...but now Iran and even Red China has been given the opportunity to fill this new, thanks to Joe Biden, what will be a most serious Middle East vacuum of power...
Read entire article and see video here.

Op-ed:
Leaving Afghanistan
By: Diane Sori / The Patriots Factor / Right Side Patriots / Right Side Patriots Radio
...And while it also comes with a certain amount of disdain and risk it comes in the guise of American military personnel who voluntarily choose to remain behind...who choose to remain and fight and to show the world that America will not forsake or leave behind to be slaughtered those who stood by her side no matter that their own president obviously doesn't give a damn...
Read entire article and see video here.
Posted by Diane Sori at 8:52 AM No comments:

New Israeli Prime Minister Naftali Bennett plans to push for a new Iran strategy during his first White House visit, saying he will urge U.S. President Joe Biden not to revive the 2015 nuclear deal with Tehran.

Biden's aides hope the talks will set a positive tone for his relationship with Bennett, a far-right politician and high-tech millionaire who ended Benjamin Netanyahu's record 12-year run as prime minister in June.

This would stand in sharp contrast to years of tensions between the conservative Netanyahu, who was close to former President Donald Trump, and the last Democratic administration led by Barack Obama with Biden as his vice president.

The visit gives the U.S. administration an opportunity to demonstrate business as usual with its closest Middle East ally while it contends with the chaotic situation in Afghanistan, Biden's biggest foreign policy crisis since taking office. Read entire article here.

Email ThisBlogThis!Share to TwitterShare to FacebookShare to Pinterest
Cuomo Grants Clemency to Convicted Cop Killer on His Way Out the Door
Leah Barkoukis / Townhall Tipsheet

On his last day in office, former New York Gov. Andrew Cuomo granted clemency to convicted cop killer David Gilbert, whom he insisted has turned his life around.

Gilbert, a member of Weather Underground, was convicted in 1983 of three counts of second-degree murder and four counts of first-degree robbery for his involvement in the robbery of a Brink’s truck in 1981. During that incident, two police officers and a security guard died, and $1.6 million in cash was stolen. Gilbert had been sentenced to 75 years-to-life in prison.

The law enforcement community was outraged by Cuomo’s decision.

Killed in the robbery were Sgt. Edward O’Grady, Officer Waverly Brown and Peter Paige, a Brink's guard. The commutation of Mr. Gilbert’s sentence, like Ms. Clark’s before him, outraged the law enforcement community in Rockland County. Read entire article and see tweets here.

Today, Tuesday, August 24th, from 7 to 9:00pm EST, RIGHT SIDE PATRIOTS Craig Andresen and Diane Sori present their Special Report: Afghanistan...Joe Biden's Epic Failure including 'A War We Should Have Won'; 'Kabul, the Taliban and Obama bin Biden'; 'Leaving Afghanistan'; and 'Afghanistan and The Deliberate Destruction of America.' 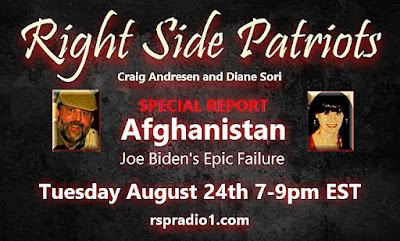 Posted by Diane Sori at 6:12 AM No comments: