Tomorrow, Friday August 10th on American Political Radio, Right Side Patriots Craig Andresen and Diane Sori present their Special; Report: Deep State's Global Agenda. This is one show you do NOT want to miss as not only will Deep State's true agenda be exposed but so will who or what Deep State actually is. 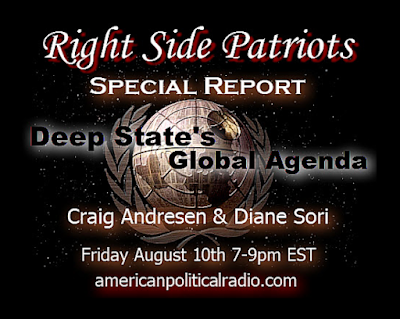 The Chair of the Kings County Council in Washington state has a gun control proposal he's pushing for. The proposal takes a three-pronged approach to dealing with "gun violence" in the area but one of the proposals is new.

Joe McDermott (D), the Council Chair, wants to make it mandatory for gun stores and ranges to have safety warning signs outside of their facilities. He detailed his vision in an OpEd in the Seattle Times:


First, I propose that public safety warning signs be posted at any place of firearm sale or discharge in King County, which will articulate the very real and significant risks to health and life inherent with firearm ownership. These signs will also provide immediate contact information for suicide-prevention and mental-health resources for individuals who might be in crisis. Once passed by the Board of Health, signs will be placed at the entrances and purchase counters of every shooting range and store selling guns in King County.

The European Union had a choice between supporting Donald Trump or supporting the leaders of the Islamic Republic of Iran, who scream “Death to America” and “Death to Israel,” aid international jihad terror groups, and brutally oppress their own people. For the EU, it was a no-brainer. “EU slaps Trump in the face, urges ‘increased […]
Read in browser »

Nation of Islam leader Louis Farrkhan’s Facebook page may be filled with anti-semitic, vicious and angry posts and conspiracy theories — but according to the social media powers-that-be, that’s all A-OK to stay.

Fact is, Louis Farrakhan, the head of the Nation of Islam, is the leader of a designated hate group, has praised Adolf Hitler as “a very great man,” and has been labeled “the leading anti-Semite in America.”

Consider what he once said by way of proving his righteousness: “If God was not with him and the Nation of Islam we could not have survived the constant and ever increasing assault of the United States government and those who say they are Jews, but are of the Synagogue of Satan.”

This — even as Alex Jones, deemed a hater, can’t find a home on several social media sites any longer.

Read entire article and see video here: https://gellerreport.com/2018/08/louis-farrakhan-facebook-alex-jones.html/
Posted by Diane Sori at 7:38 AM No comments: