BREAKING NEWS...It's official...President Trump has just announced that Jerusalem is the capital of the Jewish State of Israel alone, and that our U.S. Embassy will soon be moving.

Thank you Mr. President and God Bless you for having the courage and fortitude to rightfully do what other presidents have either refused to do or had the courage to do...and what a powerful message this sends to both the Arab world and the world as a whole. 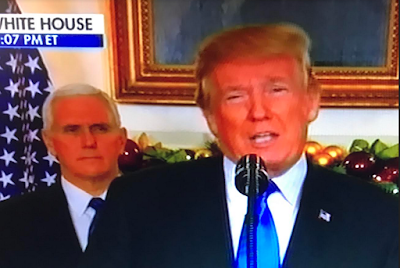 Posted by Diane Sori at 1:16 PM No comments:

Email ThisBlogThis!Share to TwitterShare to FacebookShare to Pinterest
Labels: Arab world, courage, Israel, Jerusalem, President Trump, U.S. Embassy
RIGHT SIDE PATRIOTS...for those who missed last night's broadcast (or just want to listen in again) where Craig and Diane discussed President Trump's upcoming recognizing of Jerusalem as the capital of Israel, the moving of the U.S. embassy to Jerusalem, and other Mid-East issues with special guest MUDAR ZAHRAN, Secretary General of the Jordanian Opposition Coalition; and also discussed politics with a different name; and the dawn of a new religion...you can listen to it at your convenience on SoundCloud at: https://soundcloud.com/right-side-patriots-260798913/audio2017-12-05180001-3

We have some breaking news coming from the United Kingdom. Apparently, British intelligence and security services have foiled an assassination plot against Prime Minister Theresa May.  Sky News reports that the head of MI5, Britain’s internal security service, briefed the May’s cabinet, telling them that a plot to launch some sort of explosive device at Downing Street in the hopes of killing Prime Minister May. We’ll keep you updated on the matter
Via Sky News:


Sky's Crime Correspondent Martin Brunt said: "It's the latest in a number of terror plots that police and MI5 believe they've foiled this year.

"I understand that the head of MI5, Andrew Parker, briefed Cabinet ministers today, such is the seriousness of what they believed they have uncovered.

"It is in essence an extreme Islamist suicide plot against Downing Street. Essentially police believe that the plan was to launch some sort of improvised explosive device at Downing Street and in the ensuing chaos attack and kill Theresa May, the Prime Minister."

Huma Abedin LIED to the FBI and Got Away With It

America is having its Come to Jesus moment. The Democrats consider themselves above the law, and any Republican in power, most especially President Trump, is falsely persecuted and destroyed. This has been going on for well over a decade. America is either going to go quietly into the night or we are going to go to war.

Equality for all before the law is worth fighting for, worth dying for.

HUMA ABEDIN LIED TO THE FBI AND GOT AWAY WITH IT
December 5, 2017,  Daniel Greenfield, FPM:

If we had anything faintly resembling an evenhanded justice system, Huma Abedin would be pleading guilty right about now. But of course we don’t. And so a series of Trump associates are forced to plead guilty to lying to the FBI. While Hillary continues her Spite Across America tour. Did close Hillary associates like Cheryl Mills, Hillary’s right-hand woman, and Huma Abedin lie to the FBI?

“Palestinian President Mahmoud Abbas, Jordan’s King Abdullah and Egyptian President Abdel Fattah al-Sisi, who all received phone calls from Trump on Tuesday, joined a mounting chorus of voices saying any unilateral U.S. move on Jerusalem could unleash turmoil.” The U.S. has been kowtowing to this threat for decades. It’s time we stop. Showing that we […]
Read in browser »