"How can I in good conscience vote for a bill that proposes massive expansion of social programs when vital programs like Social Security and Medicare face insolvency and benefits can start being reduced as soon as 2026 for Medicare and in 2033 for Social Security?" - Senator Joe Manchin (WV-D)

Seems that Sen. Manchin has proven the old adage that even a broken clock is right twice a day.

How sad that in this case the broken clock is not Social Security...which I will focus on in this article... per se, but is once again the federal government for it's the federal government that is the one who seems to be deliberately bankrupting this program. And while some economists now claim that Social Security's “quickly-accelerating insolvency” is primarily due to COVID-19 (isn't everything Covid related these days) along with the growing number of seniors now receiving benefits due to having left the workforce by retiring early...retiring before they had originally planned to...the truth is that this is but a very small part of why Social Security is in trouble.

So what exactly is the main reason for Social Security troubles? Simply, it's because the federal government has been transferring monies out of the Social Security Trust Fund since 1935 when FDR signed the Social Security Act into law. Created as a social insurance program...a federal “safety net” if you will for general welfare for the unemployed and the disadvantaged...the programs main purpose, however, was to make sure that retired workers age 65 and older had a continuing source of income based upon their lifetime of payroll tax contributions.

And yet over the years Congress has transferred upwards of $17.5 billion out of this trust fund...with no president to date having vetoed said transfers...and gone instead to help fund things like roads and bridges, foreign aid, the Iraq war, and now the left's social issues agenda.

Nothing like stabbing seniors and the American worker in the back. And it's worse now than ever before no matter that beneficiaries are now set to see their monthly checks increasing in 2022, via a 5.9% cost of living increase...an increase that equates to but a nominal monthly increase dollars and cents wise...while inflation continues to rise to a 30-year high basically wiping out said 5.9% increase.

A catch 22 situation if ever there was one.

Now here let's delve just a bit more into the basics of how Social Security works. First, the money you currently pay through taxes is not the same money you will receive upon your reaching eligibility age. Remember, Social Security is really what's known as a “pay-as-you-go system,” meaning that the funds you and your employer now pay into is actually being used to fund payments to folks who are currently receiving benefits. And while beneficiary numbers are growing, America's workforce is shrinking due to our population aging, retiring earlier, and living longer...what economists call a “declining worker-to-beneficiary ratio.”

And it's here where mere logic alone should dictate that a shrinking workforce translates into less monies going into the Social Security Trust Fund, which in turn means less monies will be available for when the next generation of American workers reaches retirement age. 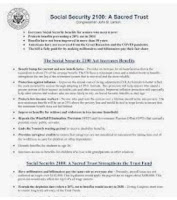 But no matter which outcome you personally see as happening, all economists seem to agree that one of these two scenarios will occur within the next 10-years or so with the second scenario, if it happens, then basically negating any additional monies the recipients had been receiving to date.

And why...because simple math dictates that said beneficiaries would then only be receiving about 78% of their usually received monthly benefits check. And while Congress is currently working to prevent this benefit cut by introducing a new bill...Social Security 2100: A Sacred Trust...this bill is nothing but a band-aid measure, so to speak, as all it does is move the date Social Security will need to cut benefits back to 2038, while allowing the current (socialist-leaning) administration more time to find a more permanent yet, I'm sure, not ideal solution.

And, know that besides the aforementioned transferring of funds from Social Security into other areas, there is another key reason for this “doomsday” scenario...as some call it... and it's not just because the funds needed for future Social Security payments are not being “monetarily replenished” via the “dedicated payroll tax,” but because the federal government is investing Social Security funds in securities...securities supposedly used to fund both Social Security's principal and interest...securities that are, however, not yielding the amounts of monies that had been projected.

In more simplistic terms, the federal government has not invested our Social Security monies wisely nor in a timely manner.

Now to put all this information into a more consolidated and dedicated form, know that while the Social Security Trust Fund currently has $2.9 trillion on hand...which might seem like a lot of money but in reality is not what with, as previously mentioned, more and more folks now reaching both retirement age and living and thus receiving benefits longer than ever before...the extra monies currently being allotted to try and negate any future inflation increases won't matter at all for reality itself dictates that benefits will indeed have to be cut in order to keep the Social Security Trust Fund solvent. But also know that any and all monies remaining in the trust fund will then see those monies being dispersed only in relation to whatever funding is still available for the government to actually disperse.

And while it is inevitable that those deserving of what is rightfully theirs...after all they've earned it...will sadly see their monthly Social Security checks getting smaller and smaller, they will also continue to bear witness to the “element's” ongoing call for monetary “equity” continuing to trump “equality” and “fairness.” And this simply means that unless the bleeding heart liberals wake up to the fact that the current Social Security system itself will continue treading on tenuous grounds, benefits will continue to be paid out, but that eventually even the monies coming in will not be enough to meet the increasing Social Security demands.

But you must be wondering why I say that “equity” still trumps “equality” and “fairness” in regards to Social Security? I say it because while we know that while Social Security derives most of its revenue from monies collecting from those currently working and who willingly pay into the system to monetarily protect them in their so-called “golden years,” we continue to see government investments...stock market investments included...investments which supposedly help to sustain the program...the fact remains that even Social Security has not been exempt from the ire of a growing number of folks who think that “the wealth”...the “equity” so to be speak...must be shared “equally” by all whether they paid into Social Security or not. “I want what you have and I want it without having to work for it,” has sadly become the battle cry of certain minority folks of both the legal (as in the BLM sorts) and the illegal kind...folks who know well how to bilk the system and who see their minority status as the means by which they're entitled to do so.

So with America's changing racial demographics coupled with more and more Baby Boomers reaching retirement age, we see the number of those actually paying into the Social Security system becoming a smaller percentage of America's population, which allows for overtly partisan political posturing of the very worst kind. And this partisan posturing is at the expense of those who are truly entitled to Social Security...as in older Americans and also the disabled...folks who will now be forced out of necessity to get by on whatever amount the government decides to pay them.

So what is a possible solution to Social Securities woes? Simply, make those in Congress be forced to live on a per monthly sum of money even less than what Social Security currently pays beneficiaries, what with inflation now and in the near future continuing to drive up the cost of goods and services even higher with each passing day...thanks of course to Joe Biden's and the Democrats dangerously foolish economic policies. Only then might things be different for those relying on Social Security to meet their daily living expenses, but than again with behind the scenes shenanigans and payoffs always going on maybe it won't be.

Preparing for the worst and hoping for the best might sadly be all that is left for those forced to live on Social Security...a true conundrum indeed. Case closed.

RIGHT SIDE PATRIOTS will hopefully return either tomorrow (12/14) or this Friday (12/18) if Craig is feeling better from his having Covid-19.