ISTANBUL (AP) — The three suicide bombers who attacked Istanbul airport were a Russian, an Uzbek and a Kyrgyz, a senior Turkish official said Thursday, hours after police carried out sweeping raids across the city looking for Islamic State suspects. Tuesday’s gunfire and suicide bombing attack at Ataturk Airport killed 43 people and wounded more than 230 others.

The day opened with police conducting raids on 16 locations in Istanbul, rounding up 13 people suspected of having links to the Islamic State group, the most likely perpetrator of the attack at one of the world’s busiest airports. The manhunt spanned three neighbourhoods on the city’s Asian and European sides.

The official, who spoke on condition of anonymity in line with government regulations, did not name“A medical team is working around the clock to conclude the identification process,” the official told journalists, noting that extensive soft-tissue damage had complicated efforts to identify the attackers. The official could not confirm Turkish media reports that the Russian national was from the restive Daghestan region.


Interior Minister Efkan Ala said 43 people were killed in the attack, including 19 foreign nationals. Of those who were wounded, 94 remained in hospital, the Istanbul Governor’s office reported.

When the people of Great Britain decided to leave the European Union it energized populist movements around the globe. Some Americans wonder if Brexit previews a Donald Trump presidency.
The presumptive Democratic nominee, Hillary Clinton, is playing up the possibility. “Donald Trump might win—send money” is her new message.

In fact, he might win. Anything is possible in American politics. He’s been able to connect with white, working class, secular voters who until now remained Democratic or stayed home.

But the success of “Brexit” offers no guarantees. There are many differences between the United Kingdom and America.

There’s also the little matter of the upcoming campaign. The U.S. will be hearing a lot more from both of the major party candidates in the coming months. How the Brits voted in June doesn’t tell us much about who Americans are likely to choose on November 8.

Still, the British contest highlights some of the themes that might serve Trump well as he crafts his message for the general election. In the UK the working and middle classes defeated the usual business, academic, cultural, media, and political elites. Average folks can win even when it seems like most everyone “important” is against them.

Tone Deaf: Michelle Obama Wears $1,750 Dress In One Of The Poorest Countries In World 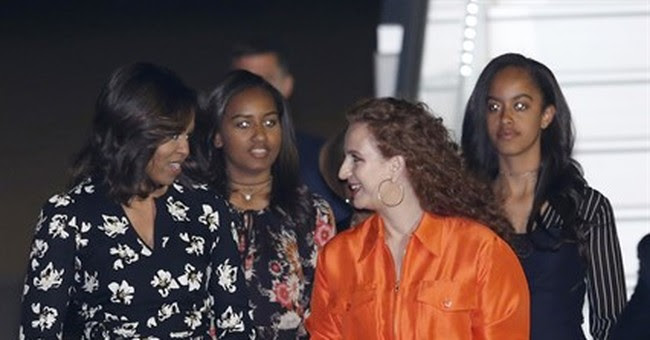 First Lady Michelle Obama, along with daughters Malia and Sasha, is on a trip to Liberia and Morocco to promote Let Girls Learn, the White House initiative for girls’ education in developing countries.

Her cause was noble—62 million girls around the world do not attend school. Often-insurmountable barriers like teenage pregnancy, lengthy commutes and chores at home take intelligent, ambitious students out of school after elementary education.

Unfortunately, Mrs. Obama did not seem to grasp the seriousness of the issue. The Washington Free Beacon reported that the First Lady wore a $1,750 Proenza Schouler floral wrap dress upon arriving in Marrakech. The average income per year for a Liberian is $370. In Morocco, paying for the designer garb would gobble up 60 percent of the average citizen’s yearly income.

Muslims killing Muslims in droves, but Israel and Westerners get condemned
By Christine Williams / Jihad Watch

In the wake of the jihad terror attack in Istanbul that killed 41 people, Israeli Prime Minister Benjamin Netanyahu called for a united front of “civilized nations” to fight against “the scourge of terrorism”, while former Israeli president Shimon Peres called on the leaders of the world to “join hands in an uncompromising war against […]


They have given us a map … a map but Obama says Islam and the Islamic State is not a problem. Obama, denial is a strategy, it is tantamount to surrender.


“ISIS releases chilling map of its ‘covert units’ across the world… and EUROPE is included,” By Patrick Maguire, The Express, June 29, 2016

ISLAMIC STATE jihadis have released a horrifying map revealing where they are covertly operating in Europe.

Since the death cult, also known as Daesh, declared a caliphate in June 2014, they have carried out a wave of terror across the world.

In a series of horrific massacres, shootings, beheadings and bombings the crazed jihadis have struck 50 times in 18 countries killing 1,100 innocent people and injuring more than 1,700...