World War II was the most destructive war in history. What caused it?

The panic from the ongoing and worldwide Depression in the 1930s had empowered extremist movements the world over. Like-minded, violent dictators of otherwise quite different Nazi Germany, Fascist Italy, Imperial Japan and Communist Soviet Union all wanted to attack their neighbors.

Yet World War II could have been prevented had Western Europe united to deter Germany. Instead, France, Britain and the smaller European democracies appeased Hitler.

The United States turned isolationist. The Soviet Union collaborated with the Third Reich. And Italy and Japan eventually joined it.

The 1930s saw rampant anti-Semitism. Jews were blamed in fascist countries for the economic downturn. They were scapegoated in democracies for stirring up the fascists. The only safe havens for Jews from Europe were Jewish-settled Palestine and the United States.

Does all this sound depressingly familiar?

The aftershocks of the global financial meltdown of 2008 still paralyze the European Union while prompting all sorts of popular extremist movements and opportunistic terrorists.

After the Iraq and Afghanistan wars, America has turned inward. The Depression and the lingering unhappiness over World War I did the same to Americans in the 1930s.

Premodern monsters are on the move. The Islamic State is carving up Syria and Iraq to fashion a fascist caliphate.

Vladimir Putin gobbles up his neighbors in Ossetia, Crimea and eastern Ukraine, in crude imitation of the way Germany once swallowed Austria, Czechoslovakia and Poland.

The Atlantic: “The Islamic State is Islamic. Very Islamic.”

This is an extraordinary piece, as it represents one of the first, if not the first, mainstream media acknowledgment that what I have been saying all these years, and illustrated in detail in thirteen books, hundreds of articles, and tens of thousands of posts here, has been absolutely correct: that jihadis use the texts and […]

In yet another stunning development in Obama’s plan to turn the war on terror over to the terrorists, he’s ramping up a counter-defense headed up by a terror-tied operative, Rashad Hussain. Over 80 people will staff the newly-empowered center.

It seems Obama is turning the war on terror over to the terrorists.

President Barack Obama used his speech on the second day of a three-day White House summit on extremism to warn against profiling people or conducting surveillance simply because of their religious beliefs.

The White House Summit on Countering Violent Extremism came under fire from critics for failing to state that the focus is on radical Islamic terrorists, including groups such as the Islamic State (ISIS) and al-Qaida, who are targeting the West in what they describe as a holy war.

Obama admitted that such groups are the reason behind the summit, but he reiterated that his administration will not label the groups "Muslim" or "Islamic" because he said they are misusing passages of the Koran to justify their violence.

Obama said it is important not to stigmatize entire communities.
"Nobody should be profiled or put under a cloud of suspicion simply because of their faith," he said.

Obama pointed toward more cooperation with Muslim communities in finding people early in the radicalization process, but, he said, "Engagement with communities can't be a cover for surveillance."

Some in the Muslim community and on the left have been critical of efforts to infiltrate mosques to find imams preaching radicalism or to find members who have a radical ideology.

In the United States, he said, local and federal authorities must make sure that Muslims aren’t isolated and that they are welcomed and integrated into society.

"Muslim Americans feel they have been unfairly targeted," he said. "We have to be sure that abuses stop, are not repeated, that we don’t profile entire communities."

Obama said the terror groups are trying to expand their reach by portraying the U.S. and other Western nations as being at war with Islam.

"We must never accept the premise they put forward, because it is a lie," Obama said Wednesday. "They are not religious leaders, they’re terrorists."
Read more »
Posted by Diane Sori at 8:19 AM No comments:

Email ThisBlogThis!Share to TwitterShare to FacebookShare to Pinterest
People beheaded...people burned alive...
and God only knows what's next...the front page of the
New York Post says it all when it comes to our traitor-in-chief...
the man who still refuses to say the words
muslim islamic terrorists... 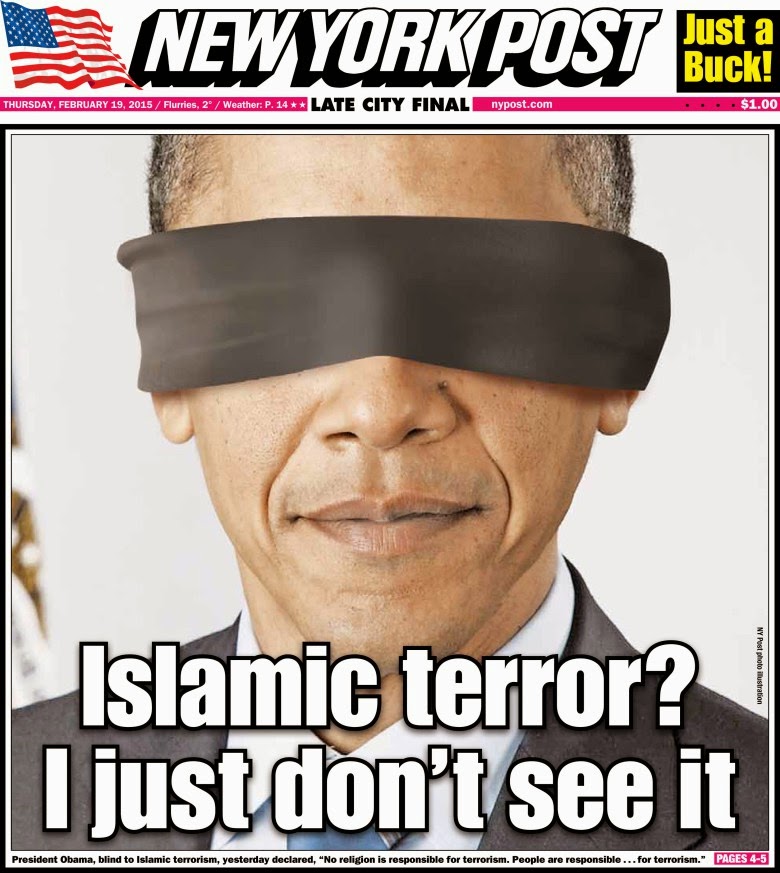 Obama's 'Summit to Counter Violent Extremism' speech in its entirety where he had the audacity to say that we are NOT at war with islam.

As the White House kicks off day-two of a summit on combating generic violent extremism, President Obama has published an op-ed in the Los Angeles Times titled, "Our fight against violent extremism." While the administration has overtly refused to specifically name "Islamic" terror, the piece finally acknowledges (albeit inadvertently) the regular existence of violence inside Islam.

Still, Islamic extremism isn't specifically named and won't be during the three-day conference at the White House this week.


The United States has made significant gains against terrorism. We've decimated the core al Qaeda leadership, strengthened homeland security and worked to prevent another large-scale attack like 9/11.

At the same time, the threat has evolved. The al Qaeda affiliate in Yemen actively plots against us. Since 9/11, terrorists have murdered U.S. citizens overseas, including in the attacks in Benghazi, Libya. Here in the United States, Americans have been killed at Ft. Hood and during the Boston Marathon.

Groups like al Qaeda and ISIL promote a twisted interpretation of religion that is rejected by the overwhelming majority of the world's Muslims. The world must continue to lift up the voices of Muslim clerics and scholars who teach the true peaceful nature of Islam. We can echo the testimonies of former extremists who know how terrorists betray Islam. We can help Muslim entrepreneurs and youths work with the private sector to develop social media tools to counter extremist narratives on the Internet.