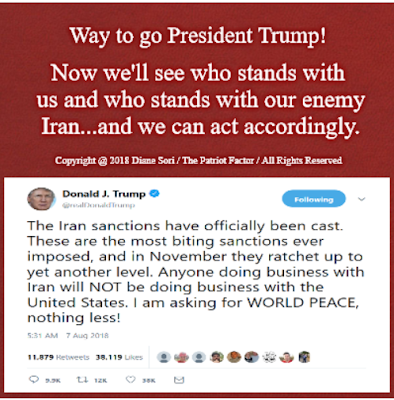 President Trump has been touting his administration's economic achievements as he campaigns around the country, through the White House press shop and on Twitter.

Presidential Approval numbers are very good - strong economy, military and just about everything else. Better numbers than Obama at this point, by far. We are winning on just about every front and for that reason there will not be a Blue Wave, but there might be a Red Wave!
— Donald J. Trump (@realDonaldTrump) August 5, 2018

But the talk of roaring success is backed up by hard numbers, not simply President Trump's claims.

The FBI released 71 pages of redacted documents tied to the bureau’s relationship with Christopher Steele. Bombshell. Further proof of a deep state coup.

By Morgan Chalfant, The Hill

The FBI on Friday released 71 pages of heavily redacted documents tied to the bureau’s relationship with Christopher Steele, the former British intelligence officer who compiled the Trump-Russia dossier.

The documents offer little information because of the redactions, and are largely comprised of payment request forms for Steele.

They do, however, indicate that Steele was told to stop gathering intelligence on behalf of the FBI in November 2016 — building on information already known as a result of the Justice Department’s recent release of surveillance warrant applications on former Trump campaign adviser Carter Page.