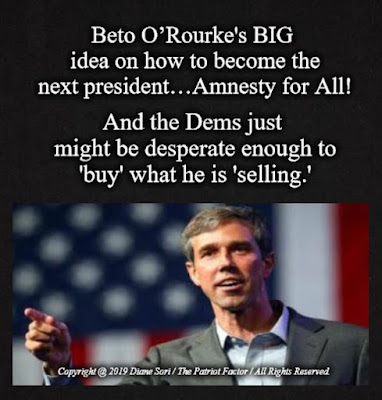 Email ThisBlogThis!Share to TwitterShare to FacebookShare to Pinterest
Labels: amnesty for all, Beto O'Rourke, presidency

Russia now only has a couple of dozens of people left in Venezuela, down from the high of 1,000. Rosetec who handled the most people in Venezuela found that Maduro could no longer pay them and they have abandoned the country.
Russia is facing a tough time at home, thanks to the sanctions the US has imposed on them and they simply can’t afford to subsidize a dying regime. The pullout was swift over the past couple of months and losing their support is a huge blow to the Maduro regime. Things could easily snowball from here.


Russian state defense contractor Rostec, which has trained Venezuelan troops and advised on securing arms contracts, has cut its staff in Venezuela to just a few dozen, from about 1,000 at the height of cooperation between Moscow and Caracas several years ago, said a person close to the Russian defense ministry.
Read more »
Posted by Diane Sori at 8:00 AM No comments:

Even a broken clock is right twice a day. Ever since Piers Morgan left CNN, in which the twilight of his time there was pushing anti-gun trash, he’s defended President Trump from the sheer hypocritical attacks the Left has hurled at him, specifically the criticisms surrounding the UK visit that is currently underway; Trump was not invited to address Westminster. Morgan is also not a fan of political correctness, trashing Gillette’s latest string of social justice warrior ads as trash. Yes, he’s right about that too.

Morgan is known for his intense and, at times, biting swipes at those who try to troll him. On that, he earns my respect; he takes it as much as he dishes it. With President Trump eating at Buckingham Palace with Queen Elizabeth as we speak, London Mayor Sadiq Khan, who is anti-Trump, was the target of Morgan’s op-ed in the Daily Mail, where he took Khan to the woodshed over his antics over the president’s visit. In short, Morgan called Khan a little pipsqueak for acting like a brat towards the UK’s oldest and most critical allies. It’s also the 75thanniversary of the D-Day landings, but that does not go through the minds of many on the anti-Trump Left (via Daily Mail)

The full story is here: “The second public school district in Washington state in less than a week was warned that it must “cease and desist” its promotion of Islam through its Ramadan policy that gives Muslim students special privileges. “The Freedom of Conscience Defense Fund (FCDF) sent the superintendent and school board of Northshore […]
Read in browser »

When is the USG going to get real and investigate this coup?

The FBI failed to document at least four interviews of witnesses in the bureau’s investigation into former presidential candidate Hillary Clinton’s use of a private server to send classified emails, according to documents obtained by the government watchdog Judicial Watch.