Tomorrow, Wednesday, February 24th from 2 to 4pm EST, Right Side Patriots Craig Andresen and Diane Sori discuss the 'Pathway' vs. 'Citizenship' debate; Facts vs Diversions; and will give their take on the South Carolina primary and Nevada caucus.

Hope you can tune in at: www.americanpbn.com

Posted by Diane Sori at 8:32 PM No comments:

The Republican candidates have discussed many issues during this ongoing primary season but none has been more contentious than the issue of immigration. Ted Cruz and Marco Rubio are at each others throats over who supported and didn't support what; Donald Trump talks about Mexico footing the bill for the very wall that will 'supposedly' keep Mexicans out of our country; and Jeb Bush (who recently dropped out of the race) said that those coming here illegally are doing so out of an act of love. But nothing is more contentious than the two pathways we hear so much about...one a 'Pathway to Citizenship' and the other a 'Pathway to Legal Status.'

A 'Pathway to Citizenship' whether some like it or not is a vastly different animal than a 'Pathway to Legal Status'...and both are different than what came to be known as 'blanket amnesty.' So now it's time for some truth, and let's start with 'blanket amnesty' and get that out of the way as no candidate running is now or has ever been for 'blanket amnesty.' And that includes Florida Senator Marco Rubio who constantly comes up against naysayers for his being part of the bi-partisan group known as the Gang of Eight...the very group who wrote the first draft of the 'Border Security, Economic Opportunity, and Immigration Modernization Act of 2013'...commonly called 'Comprehensive Immigration Reform' (CIR)...the very bill many erroneously believe would grant immediate amnesty to 11+ million people who crossed our borders illegally, but nothing could be further from the truth.

The Gang of Eight...four Democrat and four Republican senators*... had good intentions no matter what some say as they at least tried to 'fix' a system that was and still is broken...broken beyond merely saying that enforcing the laws currently on the books will fix it. The CIR bill as proposed basically called for citizenship for illegal aliens already in the U.S. contingent upon certain border security and visa tracking improvements; called for reducing current visa backlogs and fast tracking permanent residence for U.S. university immigrant graduates; wanted to expand and improve our current employment verification system; as well as wanting to improve work visa options for low-skilled workers.

And the truth is that Marco Rubio was indeed part of the Gang of Eight, but while the Democrats in the 'gang' wanted to grant all the illegals access to citizenship (hence the term 'blanket amnesty'), Rubio wanted the illegals...or what the politically correct love to call 'undocumented immigrants'...to have lived in the U.S. for five years with no arrests during that time period in order to be eligible. However, when Rubio saw that our border was not going to sealed first before any reform of our immigration laws took place...a touch point he insisted upon...he did the right thing and voted against the very bill he helped to co-author. And whether some like it or not that took courage to go against the very men he had worked so hard and so long with.

And into this discourse came Ted Cruz, who while slamming Rubio for his part in the Gang of Eight, must also take responsibility for his part in it as he proposed an amendment to the CIR bill that would have set in place a path to citizenship for those currently in this country illegally. And Cruz’s amendment would have left in place the bill’s provisions providing legal status for those here illegally. And while Ted Cruz is now making excuses for what he did, and is saying that the words spoken are not what he meant, the fact is he did what he did and said what he said...just like Rubio was part of the Gang of Eight.

But let me insert a word of recommendation here to both men...stop attacking each other! Marco Rubio and Ted Cruz have more similarities in policy than they do differences (and to see those similarities please refer to my Right Side Patriots partner and friend Craig Andresen's article at http://www.thenationalpatriot.com/2016/0...), and they need to focus their combined strength and political savvy to knock Trump out of the race. This always should have been a two man race not a media generated anointment of a Democrat now dressed in Republican clothing. And by the way...neither man supports 'blanket amnesty' nor amnesty...period.

Now as to the prime differences between a 'Pathway to Citizenship' and a 'Pathway to Legal Status'...which is what presidential candidate Marco Rubio is proposing. First, it must be understood that no matter what bloviator Donald Trump wants, 11+ million people will not be deported as the courts will (rightfully) never allow it. Second, the border must be sealed before any legal status is given to anyone; and third, it must be understood that the critical and all-important difference between citizenship and legal status is that only citizens can vote and serve on juries....legal residents cannot and will never be able to. In other words, no matter how many now illegals would eventually become legal residents...and know that they will no matter how and when the current laws are amended...their gaining legal status as residents in no way would give them the right to vote in any U.S. election nor does it give the Democratic voting rolls a boost simply because residents are not citizens.

And gaining citizenship would be no easy task in what Marco Rubio is proposing as the currently illegal person who would gain only legal resident status would have to wait a minimum of 10+ years before even beginning the process to apply for citizenship...as opposed to the current five year wait...coupled with their having to show good moral character; that they can speak, read, and write English; hold a job; and have committed no criminal offense. With that it must also be understood that granting legal resident status under the Rubio proposal will not give the illegal petitioner 'probationary legal status' during the time it would take to pass background checks...all they would get is a work permit...and most importantly they will under no conditions receive any federal benefits, and must pay a hefty fine for coming here illegally.

Also, remember that while under the existing law if you are illegally in the U.S. you are not prohibited from getting citizenship, you just have to go back to your home country to wait out the mandatory five years. Under Rubio's proposal if you want to stay here, you have to wait the 10+ years, and you have to be holding down a job during that time...meaning it would be cheaper, faster, and easier for them to just go back to their home countries to wait out the now 10+years than it will be to go through this long drawn out process. And people...that in no way is amnesty no matter what the naysayers claim.

And legal resident status as proposed by Rubio simply means that someone granted said resident status has the right to live and work in this country legally, and that they must pay any and all taxes as required by law as they do so. But most importantly, Rubio's 'Pathway to Legal Status' changes the current U.S. policy of legal resident's being able to petition for immediate family members to come here and receive permanent residence, which is a family-based system, changing it to a skills-based/merit-based system...in other words based upon the skills the petitioner has, what they can contribute to our economy, and most important of all, it helps to determine whether or not someone is coming here to become an American not just live in America, but to be an American.

A 'Pathway to Legal Status' is the right thing to do and most will realize that when they separate the anger from the realities that most here illegally...and I do know that their coming here illegally is a crime in and of itself...have become hard workers and just want to live their lives in this, the greatest nation the world has ever known. The fault of what we currently are facing is the sole property of the Obama administration not only because they do not enforce our current immigration laws, but also for their allowing illegal felons to get out of jail and meld back into the populace instead of deporting them all...with many now returning to commit more crimes, including murder, because Obama adamantly refuses to seal the border and allows for 'sanctuary cities' to continue to exist. 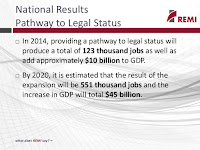 Also, we must accept the fact that part of the problems we currently face in regards to the illegal issue is because of partisan gridlock... gridlock which has prevented Congress from overhauling the immigration system, and like I said at the beginning of this article, simply enforcing the current laws won't to do it. And sadly what many refuse to see is that by doing common sense reform...as in a 'Pathway to Legal Status'...would bring the majority of hard-working illegals (those who do the jobs most Americans won't do) off the economic sidelines, and would according to many economists bring $1.5 trillion to the nation’s cumulative GDP over 10 years, and add close to $5 billion in additional tax revenue in just the next three years, amongst other positive things. That is a big plus. 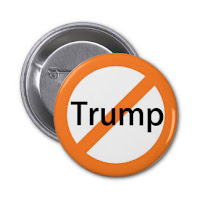 And if background checks are done on all the illegals currently residing in our country before they gain legal resident status...and don't think for a minute that this administration doesn't know who they are or where they are...will then allow authorities to focus enforcement resources on the criminal elements and security threats and send them packing. And a 'Pathway to Legal Status' would expose unscrupulous employers who help bring illegals here and would allow them to be shut down.

But the bottom line remains that no matter the anger Trump has stirred up by his trying to lump all illegals into one pot, the fact is that 11+ million people will not be deported and the Trumpers best get over it. So isn't it better to do what benefits our country and especially our economy, and try to solve this issue with clear heads, and tangible and workable policies...I believe it is. And I surely hope that the next crop of primary voters realize just that and vote responsibly instead out of Trump initiated misplaced anger...anger that should be focused on Obama, Hillary, and the Democrats...which if one pays attention Trump doesn't do...as our country's very survival depends on the voters hopefully doing just that.
----------------------------------------------------------
*The Gang of 8: Jeff Flake (R-A), Lindsey Graham (R-SC), John McCain (R-AZ), Marco Rubio (R-FL), Michael Bennet (D-CO), Richard J. Durbin (D-IL),  Bob Menendez (D-NJ), Chuck Schumer (D-NY)