Posted by Diane Sori at 3:20 PM No comments:

It's over...the nasty night of wind and rain is over...we here in Broward county thankfully made it through with very minimal damage...I personally had a few small branches down and a pool with more leaves than water it seems but that's it.

Thank you my blog followers for your thoughts, prayers, and messages. Please keep those further up the Florida coast in your thoughts and prayers as they are not making out as well.

Thanks again and now it's back to spreading the truth the media won't tell you...and to writing my articles as well. 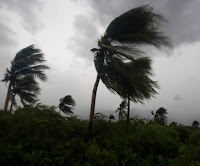 Hurricane Matthew, the fiercest Caribbean storm in nearly a decade, roiled commodities markets and forced companies from cane refiners to orange juice makers to shutter as it whipped its way toward the southeastern United States on Thursday.

Southeastern companies were closing down operations ahead of a storm that could threaten some two million tonnes of sugar and trees representing over 90 million boxes of citrus fruits in Florida. About half a million acres of cotton were at risk from torrential rain in North and South Carolina, where farmers have already been struggling during a rainy harvest.
Officials issued a state of emergency for parts of Florida, Georgia and the Carolinas for the Category 4 hurricane that by Thursday afternoon had already taken the lives of 140 people, mostly in Haiti. Port operations along the coast were slowing or shut.

For commodities markets including U.S. sugar, orange juice and cotton, the storm prompted a volatile week of trade. Though forecasters like senior meteorologist Drew Lerner of World Weather Inc said damage to Florida's sugar and citrus crops would likely be limited, producers were readying for the worst.

Robin Hood is dead. Or at least seriously ailing. The politics of taking from the rich and giving to the poor -- the politics that philosophers from Aristotle to James Madison dreaded -- just doesn't seem to be working as it used to.
That's not to say that the United States is about to give up on progressive taxation. With its graduated income tax, the American tax system is by some measures the most progressive in any advanced country.

For a generation, the jousting between Republicans and Democrats has been waged within a pretty narrow range. The former want a top rate of 33 percent, the latter 42 percent. However, Hillary Clinton, evidently trying to win over wary Bernie Sanders fans, now says she wants to raise it to 65 percent.

"Trickle-down economics all over again," Hillary Clinton characterized Donald Trump's tax plan. "I call it trumped-up trickle-down because that's exactly what it would be." A clever phrase, but not one she repeated as the debate went on.

Things aren’t looking good for Obama. According to a new CNN/ORC poll, a majority of Americans think race relations in the U.S. have worsened under our first African American president.

The poll finds that 54 percent of Americans believe relations between blacks and whites have gotten worse since Obama first took office. More specifically, 57 percent of whites and 40 percent of blacks believe race relations have worsened. A similar survey was conducted in June 2015, shortly after the racially motivated Charleston church shooting. Even then, only 43 percent said race relations had worsened.

Posted by Diane Sori at 9:21 AM No comments:


Tracking them? For what? The latest savage fashion? It begs the obvious question… since we know exactly where they are, why is it so hard for Obama to kill them off?

Answer: He doesn’t want to.

U.S. early warning satellites and sensors designed primarily to detect the launch of missiles carrying nuclear warheads are providing daily streams of intelligence on Islamic State positions in Iraq and Syria, according to defense officials.

Posted by Diane Sori at 9:18 AM No comments: