Remember The Riots When This Black Community Watch Member Was Acquitted Of Shooting A Teenage White Boy? ME EITHER!

The Trayvon Martin case reminds me of Roderick Scott. In both cases, a man claiming to be protecting his neighborhood notifies police about an unarmed 17-year-old boy he thinks is causing trouble and minutes later shoots him dead, sparking debate about guns and self-defense.

Scott shot Christopher Cervini in 2009 in Greece, NY on a windy and rainy night. Scott saw Cervini and his friends rifling through neighbors’ cars. He went outside with a gun as his girlfriend called police. Scott confronted Cervini and said the youth ran at him. Scott shot Cervini dead.

A grand jury charged him manslaughter. Scott testified in his own defense. A jury acquitted him. Self defense. The year was 2009. Eric Holder saw no need to investigate whether Cervini's civil rights were violated and there was no national TV coverage. Not a word from President Obama was uttered. Blacks celebrated the acquittal. Whites did not riot or march.

Scott is black and Cervini was white. Zimmerman is hispanic and was raised in an interracial home and Martin was black. People think race was a factor in each case. Race was not a factor in either verdict. I believe in each case the jury found the verdict within the parameters of the law, and both cases are tragic.


The original Oklahoma anti-Sharia law that passed with 70% of the vote in November 2010 was poorly written, and Hamas-linked CAIR and other Islamic supremacists immediately argued before a Leftist judge that the law would infringe upon Muslims' religious rights. They still make headway using that argument with judges and lawmakers who are ignorant of the nature of Sharia.

In reality, no one cares about individual Muslim religious practice or wants to restrict it. The purpose of anti-Sharia laws is not to stop Muslims from getting married in Islamic religious ceremonies or to restrict their religious practice in other ways, but to stop the political and supremacist aspects of Islam that infringe upon the rights and freedoms of non-Muslims, denying the freedom of speech, the freedom of conscience, and the equality of rights of all people before the law. This is the case that must be made. Let's hope this law fares better.


RALEIGH — The state Senate on Friday passed a bill that would keep courts from recognizing Sharia law.

While proponents of the legislation said it would keep people safe from foreign laws, critics derided the bill as sending a message of intolerance and bigotry to followers of Islam.

The Senate had already approved the measure when it was attached to a controversial measure that would impose stricter regulations on abortion providers in the state. But the foreign law provision wasn’t sufficiently critiqued because abortion overwhelmed the floor debate, said Sen. Floyd McKissick, a Democrat from Durham.

Now called House Bill 522, the provision’s contents haven’t changed. It reminds judges that the U.S. and N.C. constitutions are the law of the land and no foreign law can supersede them. Sometimes international laws are used in court as evidence before a judge, or in written opinions. But this bill would stop judges from considering foreign law when it violates a citizen’s constitutional rights.

“Unfortunately we have judges from time to time … that sometimes seem to forget what the supreme law of the land is, and sometimes make improper rulings,” said Sen. E.S. “Buck” Newton, a Wilson Republican and the legislation’s Senate sponsor.

Though the bill doesn’t specifically mention it, Newton was clear during Friday’s session that the legislation targets Sharia law, a legal system based on the religious and moral tenants of Islam. Few Muslim countries apply the entire body of rules, instead choosing measures relevant to them. More than 60 countries use at least part of Sharia law in their governance.

Its improper use has “worked to deprive” U.S. citizens and immigrants of their constitutional rights, Newton said. There have been 27 reported cases around the country in which Sharia law has been used, he added.

More than 20 states have introduced legislation banning Sharia law or foreign law in state courts. Many bills – including North Carolina’s – would apply only to cases in which the application of foreign law would violate a person’s constitutional rights.

That means that the Jewish groups that oppose this law are being short-sighted. It really wouldn't affect them at all.


Sen. Ellie Kinnaird of Chapel Hill, a Democrat, said she thinks the bill’s sponsors don’t truly mean to inform judges that foreign law is unacceptable, but rather the people of North Carolina.

“I think the audience is really wider,” Kinnaird said.

The N.C. Bar Association opposed the bill in its former incarnation, House Bill 695. The American Bar Association said in a resolution that the passage of such bills will have a “widespread negative impact on business, adversely affecting … economic development in the states in which such a law is passed and in U.S. foreign commerce generally.”

The danger doesn’t come from the legislation’s exact wording, said Omid Safi, a professor of religious studies at UNC-Chapel Hill. He contends this wave of anti-foreign-law legislation comes from a fundamental misunderstanding of Sharia law and a “bigoted” perception of Muslims.

“We would be delighted to have a conversation about what Sharia law actually is and what it is not,” he said. “It would be important, if we’re passing legislation on the topic, for (lawmakers who support the bill) to actually benefit from the expertise of people who might actually know something about the subject.”

That would be a good idea indeed. People do need to know what Sharia really is. But are they going to find out from Omid Safi? Omid Safi is an extremely dishonest pseudo-academic of extraordinarily low character. He peddles soothing nonsense to the easy marks at the Huffington Post about respecting other people, but elsewhere he shows his true colors: he has falsely claimed that I threatened to kill him and his family, after I dared to challenge his smear of me with the manipulative Muslim Brotherhood neologism of "Islamophobe" and offered to come to the class where he was defaming me and engage in discussion and debate with him and his students. Somehow I doubt that the likes of Omid Safi are going to tell the truth about Sharia.


The bill wouldn’t affect only Sharia law. Jewish organizations have spoken out against anti-foreign-law legislation across the United States because the measures could negate the common Jewish practice of resolving disputes according to their religious laws, Halacha.

It shouldn't. If it does, it is poorly written, and needs to be revised.
Posted by Diane Sori at 8:46 AM No comments:

Email ThisBlogThis!Share to TwitterShare to FacebookShare to Pinterest
Ros-Lehtinen: No Time for 'Niceties' With Cuba After Weapons Discovery
By Todd Beamon and Kathleen Walter
/ Newsmax

Cuba should be sanctioned for the recent discovery of weapons on a freighter bound for North Korea — not rewarded with resumed migration talks with the Obama administration, Rep. Ileana Ros-Lehtinen tells Newsmax TV.

"This is unbelievable that the very week it is uncovered that Cuba is violating a U.N. Security Council resolution, what does the United States do?” the Florida Republican asks Newsmax in an exclusive interview. "They reward the Castro regime by sitting down and talking about migration talks — and, in fact, they congratulate the Cuban regime for safe and orderly migration. This is unbelievable.

"Out of this case with the North Korean ship, the Obama administration might be congratulating the Cuban regime for a safe and orderly passage of transportation of arms to North Korea. Who knows? They're looking to reward the Castro regime for anything.

The United States and Cuba held migration talks on Wednesday, despite news that Panama had impounded a North Korean freighter earlier in the week carrying Cuban missile equipment.

The talks centered on such issues as how visas for immigrants are processed for people from Cuba, the Americas' only communist-ruled nation.

But it also grants every Cuban who reaches U.S. soil permanent residency and the ability to work, something the United States does not do for nationals of any other country.

She tells Newsmax that the discovery of Cuban weaponry on the North Korean ship trying to enter the Panama Canal should have prompted the U.S. to scrap the migration talks.

Cuba has said the weapons were obsolete missiles and spare parts from the last century, which were being sent to North Korea for repairs.

But diplomats have said that the shipment may have violated tough U.N. sanctions on Pyongyang aimed at curbing its nuclear-weapons program.

"As always, the Obama administration is late to the dance — and they're very weak and they're so ineffective," Ros-Lehtinen says. "Has [Secretary of State John] Kerry sent inspectors to Panama to look at it from the U.S.? No. Has Secretary Kerry asked the U.N. to take matters into their hands and send inspectors to Panama? No. Nothing has happened.

"If they thought that these were obsolete small arms, which is still a fabrication, why did they hide them under tons of sugar?" she adds. "They were hiding the cargo. These are enlisted arms. They're not obsolete and they were violating sanctions."

Turning her attention to other world hotspots, Ros-Lehtinen says the Obama administration should not become militarily involved in helping the Syrian rebels battle President Bashir al-Assad.

"Yes, it's a horrid situation. It's a humanitarian crisis, but there are a lot of countries in this world. We are one country. Why is it always up to the United States to take these tasks and then have these other countries say they'll help us and then, in the end, they don’t?

"What we should do is pressure countries like Russia," she adds. "Russia continues to send arms to Assad — and then Assad uses them to kill his own people. Let's use what leverage we have over Russia and tell them to stop that. And China, as well, is helping Russia aid the Syrian government.

"This is a dastardly regime that kills its own people. I don’t favor sending arms to the rebels, because these arms could end up in anyone's hands. We saw that in Libya. What happened in Benghazi? These are folks that we trusted with our security — and then four Americans end up being killed.

"It's time to stop giving arms to people we can't rely on 100 percent," Ros-Lehtinen says. "There's no military role for the United States. There's a role for other countries to get involved and help that situation."

"We shouldn’t have sent aid when Morsi was in power. We certainly shouldn’t send it now, when we don’t know what's going to happen and what the next government is.

"But still, the Obama administration is pushing not millions, but billions of your dollars. The Obama plan is to send over $1 billion to Egypt when we don’t know who's ruling Egypt — and we don’t know who will be there tomorrow. It's a mistake. We should cut off aid."

And the White House is making yet another foreign-policy blunder by working to broker peace between the Israelis and Palestinians, Ros-Lehtinen tells Newsmax.

"The Israelis have always wanted peace. They want to negotiate, but they don’t have a true partner for peace. What we've seen is a corrupt Palestinian Authority government, where we don’t know where our tax dollars have gone. There's no transparency, there's no accountability.

"And with all of the problems that are going on in the world, for the administration to keep sending Secretary Kerry there again and again while the world is just blowing up is wrongheaded and misguided".
Posted by Diane Sori at 8:18 AM No comments:

Op-ed: The Zimmerman trial and verdict in a cartoon nutshell

Sometimes a few political cartoons speak the truth
like nothing else can... 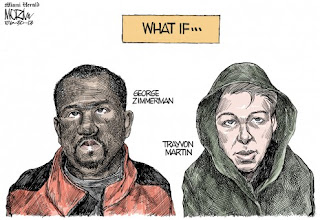 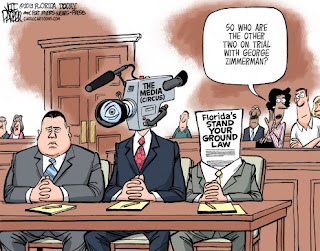 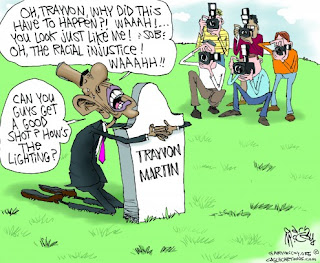 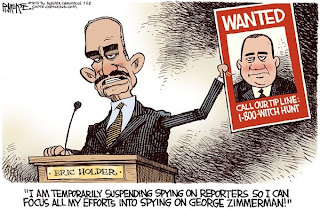 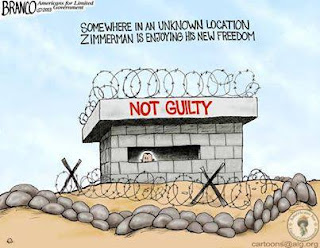 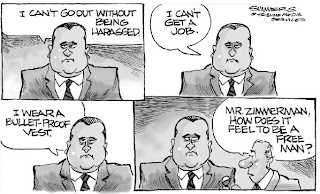 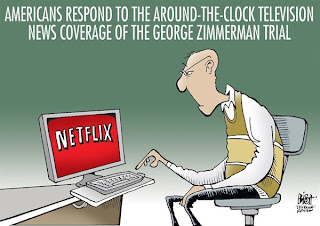 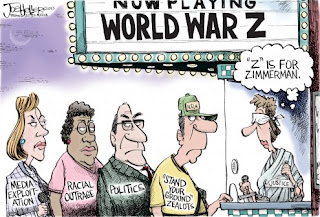