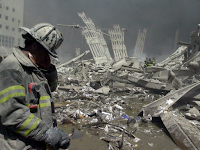 ...And yet in my heart of hearts I still do believe that America will never truly be brought to her knees...she might stumble and fall a bit as we sadly are now bearing witness to...yet the fact remains that America will indeed survive because America must survive. And survive we will not just for us, the generation who lived the nightmare that was 9/11, but for future generations as well...that is as long as we put partisan politics and old hatreds aside and unite together to collectively become as one..."We the American People."...
Read entire article and see videos here.
Posted by Diane Sori at 7:10 AM No comments:

As Americans across the country prepare to observe the 20th anniversary of 9/11, one group of those impacted by the terrorist attacks is being excluded from official ceremonies at Ground Zero in lower Manhattan.

The official press release from the National 9/11 Memorial and Museum — chaired by Michael Bloomberg — explains:

The commemoration is for family members of victims of the 2001 and 1993 attacks, and they have been invited to participate in this year’s reading of the names. The 9/11 Memorial Museum will be open solely for family members, beginning at 7 a.m.

On September 11, 2001, nearly 3,000 innocent people were murdered by radical Islamic terrorists. The loved ones of those whose lives were snuffed out 20 years ago deserve to have a venue to mourn and remember. But shouldn't survivors from Ground Zero who worked in the towers or responded to the attack — many of whom had friends and colleagues who didn't make it home that night — also have the chance to mourn at the site or participate in the ceremony?

Today, Friday, September 10th, from 7 to 8:00pm EST, RIGHT SIDE PATRIOTS Craig Andresen and Diane Sori present their Special 9/11 Tribute including 'Never Forget...Never Forgive'; and '20 Years and 20/20 Hindsight.'
Hope you can tune in to RIGHT SIDE PATRIOTS on https://rspradio1.com. Click 'LISTEN LIVE' starting at 6:50 pm EST with the show beginning at 7pm EST.
Posted by Diane Sori at 6:21 AM No comments: