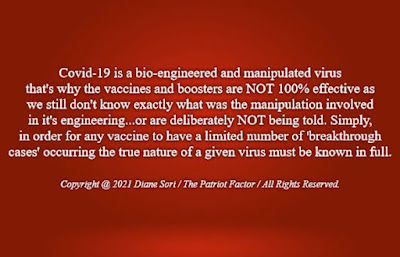 As 2022 begins America and the world enter year three of the Covid pandemic with seemingly no end in sight as variants keep occurring while China has yet to be officially called to task for releasing this nightmare upon a mostly unsuspecting world. An “accidental” release is the story China is sticking with no matter that China's communist government is an enemy of and threat to free peoples everywhere. And here in our own country no red flags were raised even after it was found out that Dr. Anthony Fauci himself had gotten us involved in China's “gain of function” research program. But then again why would an alarm be sounded, after all Fauci and crew...Joe Biden and his puppet-master Barack HUSSEIN Obama included...are known adherents of the UN's Agenda 30 and Agenda 50 programs...programs that support a one world government and its call for worldwide population control.

Culling the world's herd via Covid-19 perhaps...it's no longer as far-fetched a scenario as it once seemed.

Yet President Trump did try to stop Covid-19 from reaching our shores by wanting to shutdown our borders completely, but the left pulled out the race card and would not allow it, and thus America's nightmare began. And the lies Fauci told to Trump about the virus' possible spread being but minimal at best were a cover for what Fauci knew was to come...chaos, sickness, and death on a scale unseen here in our country since the Spanish Flu Pandemic of 1918. And Fauci loved every minute of it for he relished in becoming the supposed “savior” of the masses...masses who hung onto his every word as if he were Jesus walking upon water.

But little did the masses realize that they were actually helping to propagate the still ongoing fear and panic by buying into Fauci and crew's vaccine and now booster hype instead of understanding that what was needed was an antidote at best or at the very least viable, readily available, cost effective therapeutics. And while Covid-19 continues to manifest itself as a viral illness, I do believe it remains at it's core a Chinese government initiated bio-weapon. And why...simply because why else would “gain-of-function” research...research directly involving alteration and manipulation of genotypes and resulting phenotypes...have been needed on a naturally occurring, much less problematic animal virus then knowingly turning said virus into one that is way more pathogenic and transmissible to humans than those viruses that solely exist in nature.

And when President Trump, with all his good intentions, initiated “Operation Warp Speed”...he also bought into the vaccine hype for he, I believe, was not told by Dr. Fauci that any bio-engineered and manipulated virus would likely not respond to a vaccine in the same way as a naturally occurring virus would. But why was Trump not told...because Fauci, a bought-and-paid-for Democrat party shill, could not allow the ending or even the managing of the pandemic to become a feather in Donald Trump's cap, most especially not with the 2020 elections then fast approaching. That and the fact that many in Congress had already been given a heads-up to buy stock in the companies that would be producing the vaccines (read about that in my article, The Business of Covid-19) along with the seemingly unending need for booster shot after booster shot as more variants would surely occur...as does happen with most viruses...as did happen with first the Delta variant and now with Omicron.

And while Delta did prove to be a formidable foe, it also proved that the so-counted upon vaccines would not be the hoped for end to our Covid-19 woes for so-called “breakthrough cases” started to appear in increasing numbers in the fully vaccinated and boosted. And while the media tried to play this down as well as that fact that some were dying from the actual vaccine itself along with numerous young adults experiencing serious heart issues, new therapeutics like monoclonal antibodies did keep others from dying. And so we trudged on in this battle against a bio-engineered virus as many continued to listen to Fauci and Biden's bloviations about rolling up their sleeves and getting “jabbed” while others of us held to our convictions that the vaccines were not only treading into dangerous and unknown territory, but that their future ramifications remained largely unknown.

So as Delta started to retreat a bit, as virus usually do, lo and behold another variant suddenly occurred, the one we now call Omicron...otherwise known by many as a manifestation of the common cold. Yet once again the doom and gloom alarm was sounded with Biden fueling the pyre of fear by his telling the public that Omicron is “here now and it's spreading and it's gonna increase. We are looking at a winter of severe illness and death for the unvaccinated.” But the problem is that those vaccinated and boosted are now coming down with Omicron as much if not more so than those of us who wisely remain the unvaccinated.

Viruses, especially engineered viruses, have proven themselves to be strange bedfellows indeed for as time passes the ensuing variations while tending to spread faster do also tend to be symptomatically milder in nature than the variants that came before...not always but way more times than not. In fact, while a new variation might multiply faster within each new host...and Omicron seems to multiply up to 70 times faster inside respiratory tract tissue within 48 hours after infection than the Delta variant does...it's actual symptoms...as in the illness it causes...tends to be milder and of shorter duration. Simply, spreading, peaking faster, then dropping in numbers sooner rather than later is most variations calling card no matter if it comes in like a bull in a China shop.

And this currently is what we're seeing with Omicron as witnessed by the case drop in South Africa, the very country where this newest variation seemed to originate from. In fact, it now appears that in but three weeks time Omicron peaked and passed with a noticeable drop in new cases, leading South African and numerous other medical experts to believe that Omicron recedes fairly quickly no matter its garnering a temporary spike in new cases. And this is based upon the documented fact that after South Africa reached a high of almost 27,000 new cases nationwide on the last Thursday in November, that the numbers dropped to 15,424 by the following Tuesday, and that by December 12th just over 3,300 new cases were reported in South Africa's most populous province of Gauteng...a province that is home to some 16 million people...and have continued to decrease unabated ever since.

In fact, South Africa's Marta Nunes, Senior Researcher at the Vaccines and Infectious Disease Analytics at the University of Witwatersand, stated that, “The drop in new cases nationally combined with the sustained drop in new cases seen here in Gauteng province, which for weeks has been the center of this wave, indicates that we are past the peak,” and that “It was a short wave and the good news is that it was not very severe in terms of hospitalizations and deaths.”

Simply, it took a certain amount of time for the original Covid-19 strain to reach our shores, and it also took time for the Delta variant to start raising havoc here in our country as well, but Omicron reached our shores sooner rather than later and has proven itself to spread more quickly. However, that does not change the fact that in epidemiology a very steep and fast increase in the number of those infected by a virus tends to be followed by a just as fast and steep decrease in viral illness along with its symptoms tending to be less severe in nature, including seeing less hospitalizations and deaths.

And this is the scenario South Africa has proven, and it's the same scenario we are now seeing here in the U.S. And said scenario has changed to such a degree that health expert Dr. Ashish Jha, the Dean of the Brown University School of Public Health and former health expert at Harvard University, recently stated that public health officials should stop using previous Covid-19 case data as the central metric by which the severity of the current Covid-19 pandemic is measured, because it's no longer reliable as Omicron does appear less virulent despite its being highly contagious. “We really have to focus on hospitalizations and deaths now...as the infection wave has not translated to higher incidences of hospitalization and death in other countries thus far.”

So while other countries around the world have now also been affected by Omicron, in fact it has already surpassed Delta as the dominant Covid virus strain in many countries including here in the U.S., the fact remains that Omicron is behaving as most viruses do...as in becoming more of a nuisance than a serious life endangering threat, as proven again by South Africa where only 23.7% of its population of 60,409,155 have been vaccinated. And this means that vaccines are but an adjunct...an adjunct that is finally starting to take a backseat to the all important and much needed factor known as “herd immunity.” Remember, at the time of the worldwide Spanish Flu Pandemic of 1918, few viral vaccines were in existence, meaning it was basically “herd immunity” that eventually helped end said pandemic.

And what exactly is “herd immunity” and why is it critical to ending the Covid-19 pandemic?

Simply, “herd immunity” happens when a large portion of the population becomes immune to a disease, thus making the spread of that disease from person to person highly unlikely. And it does so at the same time it starts protecting the whole not just those who are or have become immune...whether they be naturally immune or having become immune from previously being infected or vaccinated, thereby having developed the much needed protective antibodies. And if the proportion of the population that is immune to said disease is greater than the threshold of those coming down with or having said disease, the spread of that disease will naturally decline.

And this seems to be the point that Omicron has brought us to for those now being infected are not as seriously ill as those who came down with the earlier Covid variations, as the virus seems to be losing its fertile human feeding ground. Remember, viruses need a host to multiply and live off of in order to survive, so if its supply of hosts becomes immune to its havoc the virus then loses the very entity that it needs for survival.

But as it now becomes more and more apparent that “herd immunity” is not what the Democrats want to see happen for not only is Covid a profitable monetary commodity for politicians on the take as well as for Big Pharma, but because along with “herd immunity” comes the Democrat hierarchy's loss of control over the masses. And fear of losing control can be witnessed by both Joe Biden's recent doom and gloom “winter of death” scenario, and by Dr. Fauci's push for masks being worn at all times even at home; his advising that we should cancel Christmas and New Year's gatherings; and that the shunning of we the the unvaccinated should become the new norm.

On Tuesday, January 11th, from 7 to 8:30pm EST, RIGHT SIDE PATRIOTS Craig Andresen and Diane Sori will discuss 'Variant Truths'; 'You Can’t Spin a House of Cards'; and important news of the day.