Just a Thought...
It's Time
By: Diane Sori / The Patriot Factor

Take the damn North Korean launch bases out now! NO bases = NO launch of ICBMs = NO attack on our homeland or on our allies.
Posted by Diane Sori at 8:22 AM No comments:

Guy and Leah have written about the drama unfolding at the Consumer Financial Protection Bureau. There’s been a fight over who is actually in charge. Leandra English, the deputy director of the agency, and Mick Mulvaney, the head of Office of Management and Budget Office, both are caught in a duel with one another. English says she’s acting director, while Mulvaney is emailing staffers at the CFPB, telling them to ignore her directives. A lawsuit has been filed, but Guy mentioned that this is nothing but a would-be coup by English, who should be fired for insubordination. Richard Cordray, the former head, resigned earlier this month. He’s expected to run for governor in Ohio:


As a result, there was a vacancy at the top of an executive agency.  Under the law, President Trump has the authority to fill that vacancy.  But that's not how the Left sees it. They're arguing that the CFPB is so "independent" that the president and Congress have virtually no say over its actions or leadership decisions, which is why the outgoing director schemed to appoint his own chief of staff as his successor.  She has sued Trump and Trump's legally-installed interim director, Mick Mulvaney, claiming to be the agency's rightful leader.  She is not.
[…]

Read entire article here: https://townhall.com/tipsheet/mattvespa/2017/11/28/the-cfpb-wouldbe-coup-is-over-court-rules-in-favor-of-trump-administration-n2415353?utm_source=thdaily&utm_medium=email&utm_campaign=nl&newsletterad=
Posted by Diane Sori at 8:14 AM No comments: 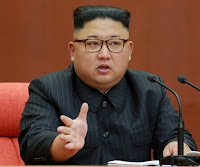 The missile traveled 2,800 miles and landed close to Japan and was the first test by Pyongyang since a missile fired over its neighbor in mid-September, officials said.

North Korea launched the missile a week after President Donald Trump put North Korea back on a U.S list of countries that Washington says support terrorism. The designation allows the United States to impose more sanctions, although some experts said it risked inflaming tensions on the Korean Peninsula.

Japan's government estimated that the missile flew for about 50 minutes and landed in the sea in Japan's exclusive economic zone, Japanese broadcaster NHK said. An Aug. 29 missile fired by North Korea that flew over Japan was airborne for 14 minutes.
South Korea's Joint Chiefs of Staff said Wednesday's missile was fired from Pyongsong, a city in South Pyongan Province, at around 1817 GMT over the sea between South Korea and Japan.

This is a war, and the Benghazi jihad massacre was one battle in that war. Yet authorities continue to prosecute these jihadis as if they were a series of criminals committing separate and discrete criminal acts that are unrelated to one another. If we had arrested and tried separately in criminal court every German and […]
Read in browser »

By Grizzly Joe / THE GELLER REPORT

The Southern Poverty Law Center (SPLC) seeks to silence and marginalize all who encourage legitimate discourse on the ideology that motivates the savagery of jihad. Their spurious attacks on The Geller Report are well documented. Ms. Geller has stated their goal succinctly: “For years I have warned that SPLC uber-left hate machine [has] one objective and one objective only: to destroy people who reject leftism, socialism, and collectivism.”

Thusly another in a long line of hit pieces from the SPLC attempts to ostracize our friend Robert Spencer of Jihad Watch after his visit to Stanford University. (See “Stanford: Fascist students stage walkout at Robert Spencer event, administration bars others wanting to enter,” Jihad Watch 11/15/17.) Naturally, a full and complete rebuttal to the SPLC piece could very realistically extend into a doctoral thesis-length publication. Sadly, consumers of SPLC propaganda are unlikely to read our commentary herein, let alone a lengthy discourse which could shatter the leftist groupthink bubble they live in. Therefore, we engage in a brief examination of the SPLC attack upon Mr. Spencer to remind Geller Report readers that we not only have to be informed counter-jihadists, we need to be fully informed about those “advocacy groups” that seek to silence us.

For our purposes, we need only highlight the SPLC’s opening paragraph: