Sometimes a picture does say it all...

And this sentiment is growing all across America...and rightly so. The Oklahoma beheading being declared 'workplace violence'
by the Feds was the last straw for many. 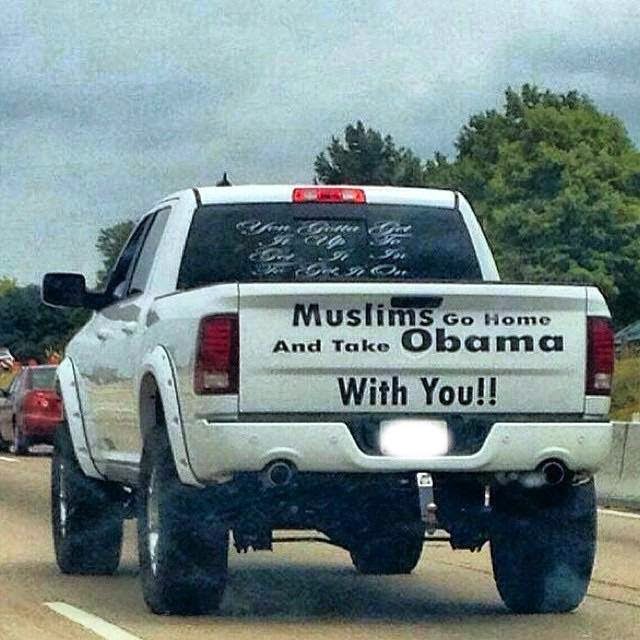 Robert Spencer in PJ Media: 7 Reasons Why the Oklahoma Beheading Has Everything to Do with Islam

Here are some clues that Jah’Keem Yisrael acted on the Qur’an’s hatred and contempt for non-Muslims, and its calls for violence against them. My latest in PJ Media:


A convert to Islam who named himself Jah’Keem Yisrael (formerly Alton Alexander Nolen) beheaded one of his coworkers and was shot while trying to behead another on September 26 at his place of work, Vaughan Foods in Moore, Oklahoma. Despite the numerous indications that Yisrael was inspired to choose his manner of murder and to carry it out by his immersion in Islam, authorities profess to be puzzled as to why he did it, or at least certain that his actions had nothing to do with that most misunderstood of religions, Islam.

The UK Daily Mail reported Tuesday that “while the FBI is investigating his links to Islam, and while he believed Nolen was using Arabic terms during the attack,” Cleveland County prosecutor Greg Mashburn “said the attack seemed to be tied more to the complaints against him” by coworkers at Vaughan Foods. Traci Johnson, whom Yisrael tried but failed to behead, said that not long before the attack, she got into an argument with the soon-to-be beheader “about him not liking white people.” Mashburn accordingly jumped at the chance to report that the attack was racially, not religiously motivated: “It had more to do with race rather than trying to convert people.”

Likewise Tony Blinken, Obama’s deputy national security adviser. When he was asked whether the beheading was an act of terror or, as the Obama administration notoriously classified the Fort Hood jihad massacre of November 2009, workplace violence, Blinken responded: “We don’t know. The FBI has an active investigation. I’m not going to get ahead of it. Let’s see what they find.” And as for the FBI, Special Agent in Charge James E. Finch said that the bureau hadn’t yet figured out what Yisrael’s motive was.

1. His hatred for America and proclamation of a Sharia future.
Jah’Keem Yisrael’s Facebook page, recently taken down, was extraordinarily revealing. According to the New York Daily News [6], it was “riddled with phrases like ‘Sharia law is coming’ and calling America ‘wicked.’”

2. His admiration for jihad terrorists.
The New York Daily News also reported that the Facebook page had “photos of various terror groups and their leaders, including bin Laden, who was killed by U.S. forces operating in Pakistan in 2012.”

3. His positive view of beheadings.
His page also featured a graphic photograph of a beheadings accompanied by this Qur’an quote:


“I will instill terror into the hearts of the Unbelievers: smite ye above their necks and smite all their finger-tips off them” (Qur’an 8:9-13).

4. His Qur’anic quotes and Islamic exhortations.
Jah’Keem Yisrael filled his Facebook page with quotations from the Qur’an and exhortations to his fellow Muslims to be more rigorous and correct in their observance of Islamic ritual and morality. One of these read:

5. His Islamic State hand signal.
Also on Yisrael’s Facebook page was a photograph of him with two members of the Islamic Society of Greater Oklahoma City; Yisrael stands between them holding up his index finger in the sign of the Islamic State, signifying Islam’s uncompromising monotheism….

Posted by Diane Sori at 9:29 AM No comments:

On the eve of the holiest day of the year for the Jewish people. The antisemites of Sweden, who have all but given up and handed their country over to Islamic supremacists, seek to impose the same on the Jewish people.

Sweden has, in fact, evolved into more of an Islamic state than a Western one. Recent news reports show crushing weakness and dhimmitude in the wake of violent Muslim agitation.

Their response to the jihad raging on their streets is, “We will have to live with the shootings.”

Jews are openly beaten in the streets in Sweden by Muslims.

Muslim politicians in Sweden have called Jews apes and pigs.

Swedish police are ambushed and attacked by Muslim mobs. Police are beaten by Muslim gangs.  Regularly.
...

Email ThisBlogThis!Share to TwitterShare to FacebookShare to Pinterest
WASHINGTON (MCT) — A week after Attorney General Eric H. Holder Jr. announced plans to step down, three administration insiders lead the president’s short list to replace him, according to sources inside and outside the White House.

Solicitor Gen. Donald B. Verrilli Jr., who successfully argued the administration’s case for the Affordable Care Act before the Supreme Court, is mentioned more frequently than the other top candidates: Labor Secretary Thomas E. Perez, a progressive considered by the White House to be a Cabinet standout, and former White House Counsel Kathryn H. Ruemmler.

Perez was a lightning rod for Republican criticism when he headed the Justice Department’s Civil Rights Division and barely squeezed through his confirmation last year. His nomination as America’s top law enforcement official would provoke a major battle in the Senate.

White House officials say the president has not yet made a decision and no announcement is imminent, despite criticism that they should have been prepared to nominate someone immediately given Holder’s frequent signals that he planned to leave. Now, the administration will move swiftly to win confirmation in the current, Democratic-controlled Senate in case Republicans take over the chamber after the November election.

Each of the three top contenders has garnered Obama’s trust, although Verrilli and Ruemmler have a longer history and closer relationships with the president. Perez, on the other hand, could bolster Obama’s flagging support from the party’s Latino base, which has been frustrated by the White House’s slow progress on immigration reform.

In light of the first case of Ebola in the United States emerging earlier this week after Thomas Duncan traveled to and from the country of Liberia to attend a funeral (and then knowing he was infected, lied on a medical form before hopping on a flight back), many people are asking why flight bans or restrictions to Ebola stricken countries have not been put in place.

On Wednesday, White House Press Secretary Josh Earnest essentially argued that because America has the ability to treat the disease, that it is unnecessary to implement travel restrictions in order to prevent it from coming here.


Speaking from the White House Wednesday, White House Press Secretary Josh Earnest dodged questions about why flights from countries with Ebola outbreaks are still being accepted to the United States. He did not detail any future plans to stop flights from those countries, or to track connections through Europe to those countries, despite the first case of Ebola showing up in the U.S. after a Liberian man went to a funeral in West Africa and then returned home to Dallas.

In his justification of the administration continuing to allow flights, Earnest argued that because people carrying Ebola don't have symptoms when they get on planes, there isn't a need to limit travel.

Earnest said Ebola will be handled through "rigorously applying medical procedures recommended by the Centers for Disease Control."

Obama to Voters: Hell Yes, My Agenda is On the Ballot This Fall

The Washington Post's Chris Cillizza pictures Democrats in tough races cringing as Obama presented an ornately wrapped gift to Republican ad-makers in his economic speech at Northwestern University on Thursday:


Here are the four sentences that will draw all of the attention (they come more than two thirds of the way through the speech): "I am not on the ballot this fall. Michelle’s pretty happy about that. But make no mistake: these policies are on the ballot.

Indeed. And so are your steadfast rubber stamps, Mr. President.  Thanks for clarifying.  This braggadicio comes at time when O's approval ratings stand at a healthy (42/58) overall and (40/56) on the economy, among likely voters.  He touted Obamacare, telling the audience that despite what Fox News might tell them, Obamacare is working well in the real world.  Sound familiar?  Click through for a comprehensive destruction of that ridiculous talking point.  Ridiculous and unpersuasive, that is:

These policies will be on the ballot in November, guys.  "Every single one of them."  He also sounded this tired note, ignoring his own White House's record on the fake "equal pay for women" metric he insists on citing:

This big pep talk also arrived on the same day that Democrats from Arkansas to Kentucky to Colorado were actively sprinting away from the Obama and Democratic brands.  (Really, Mark Pryor?  Do you think endorsing Chuck Schumer over Harry Reid for majority leader is some sort of life preserver in Arkansas?)  I'll leave you with the video of the man himself, followed by a choice clipping from the Associated Press' write up:


Obama laid claim to an economic recovery that he said has made steady progress, yet he conceded that many families have not benefited from lower unemployment, beefed-up corporate profits and a pumped-up stock market. Obama offered a lengthy defense of his policies, from bailing out the auto industry to his health care law, and he renewed his call for a higher minimum wage and equal pay legislation. He said that while he's not seeking election in November, "these policies are on the ballot, every single one of them."...In the AP-GfK poll, 4 in 10 approved of President Barack Obama's handling of the economy, generally unchanged since late last year. Likely voters give Republicans a narrow edge as the party more trusted to handle the economy, 36 percent to 31 percent who favor the Democrats' approach.

It's pretty simple, really.  If you believe Barack Obama's policies have been successful and that he needs more help in Washington to take the country further down its current path, vote for his party.  If not, vote Democrats out.  "Every single one of them."

Today, October 4th from 11am to 1pm EST on RIGHT SIDE PATRIOTS on CPR Worldwide Media…Craig and Diane will EXPOSE an extremely dangerous new tactic being proposed by some 'supposedly' on OUR side concerning next month’s midterm elections. Also being discussed will be the effects of unemployment and ObamaCare on those elections...and of course Ebola...Obama's newest 'gift' to America.


As always, RIGHT SIDE PATRIOTS Craig and Diane will also cover the latest breaking news, and their articles in The National Patriot and The Patriot Factor!

Don’t miss the LIVE Saturday edition of RIGHT SIDE PATRIOTS from 11am to 1pm EST on CPR Worldwide Media... http://cprworldwidemedia.com/liveradio/
and chat with us live at:
https://www.facebook.com/groups/cprworldwidemedia/