"Are you going to report on this so the world can hear their voices?”
- Florida Senator Marco Rubio (R)

Cuba...a mere 90 miles from the U.S. yet for all practical purposes it's a world away...a world where freedom is non-existent and where communism reigns supreme. Cuba...a nation where “unauthorized public gatherings” are illegal and where actual physical protests are rare and far between. And yet the Cuban people could only be pushed so far as witnessed by the massive protests that recently did and still are taking place not just in Havana but in small towns throughout the island nation....protests to demand an end to the country's communist dictatorship, its socialist based failed economy, and its sixty plus years of repressive “iron fist” rule. And within the protesters calls for “Libertad, Basta y Unir”...as in “Freedom, Enough, and Unite”...one can hear voices demanding that Cuba's President Miguel Diaz-Canel step down.

McCarthy said that inflation is due to large spending from Democrats, something that is causing everyday Americans to spend more of their paycheck on necessities like food, gas, and insurance.

"Republicans have sounded the alarm on this and we will continue to hold Democrats to account for their reckless handling of the economy," the statement read.

The statement features the testimonies of people gathered from social media responses.

McCarthy points out that even some Democrats acknowledge the results of Biden's spending. Kim Schrier, a representative from Washington state, said: "We knew that there was a possibility that this could lead to inflation….I know it feels—I feel it."

Posted by Diane Sori at 8:58 AM No comments:

Today, Tuesday, July 20th, from 7 to 8:30pm EST, RIGHT SIDE PATRIOTS Craig Andresen and Diane Sori discuss their Special Report: Cuba On the Brink including 'Cuba's Fight For Freedom' and '90 Miles From Freedom'...plus important news of the day. 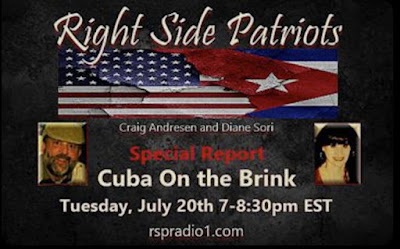 Posted by Diane Sori at 6:21 AM No comments: