Today, Wednesday, January 30th from 7 to 8pm EST on American Political Radio,  a special  RIGHT SIDE PATRIOTS broadcast where Craig Andresen and Diane Sori discuss the newest developments regarding President Trump's push to build the wall.

Posted by Diane Sori at 9:56 AM No comments:

...the “Reproductive Health Act”...a law which allows women to terminate a pregnancy of a ready-to-be born baby because said baby is now not deemed a “person” or a “a human being” until it has been born alive...

https://thepatriotfactor.blogspot.com/2019/01/op-ed-new-yorks-descent-into-hell-by.html
Posted by Diane Sori at 9:27 AM No comments: 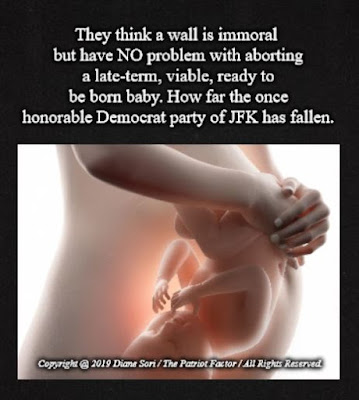 Posted by Diane Sori at 9:22 AM No comments:

The furor over Gov. Andrew Cuomo's inhumane pro-abortion bill in New York, which allows abortion up to 24 weeks, has yet to subside. But on the heels of his signature, a lawmaker in the state of Virginia has introduced an even more radical piece of legislation. Virginia House of Delegates member Kathy Tran (D-Fairfax) has offered up a bill would allow a mother to get an abortion at the very end of her third trimester. Subcommittee Chair Del. Todd Gilbert (R-Shenandoah) had to hear it to believe it.

Heartbreaking... This isn't in New York, this isn't in California, this happened just this week right here in Virginia. @VAHouseDems proposed legislation to provide abortions up to just seconds before that precious child takes their first breath. Watch for yourself. pic.twitter.com/AxgPVyI6kU
— VA House GOP (@vahousegop) January 29, 2019

In the video, Gilbert asks Tran up until what point physicians be allowed to perform an abortion. She was very candid.

“The White House is putting the Europeans on notice, saying that if they try to do an end-run around U.S. sanctions on Iran, they will be subject to stiff fines and penalties.” Iran is a rogue nation with jihadist proxies operating worldwide; it aims to obliterate Israel. No Western nation should be appeasing it. Unfortunately, […]
Read in browser Â»

The spread of evil is the symptom of a vacuum. Whenever evil wins, it is only by default: by the moral failure of those who evade the fact that there can be no compromise on basic principles (Ayn Rand). Barack Hussein Obama, while he was President, compromised on every basic principle of freedom and defense of liberty. That’s why the Middle East descended into chaos so far and so fast, while Obama was boasting, “Al Qaeda is on the run!” I warned of this in my book, The Post-American Presidency: The Obama Administration’s War on America. If my warnings had been heeded, we could at least have been spared four years of that disastrous presidency.

Former US president Barack Obama lied to Saudi Arabia when violating the redlines he famously declared regarding Syria’s use of chemical weapons and then not acting when they were used, a former senior Saudi official said in an interview with Independent Arabia.

DISSENSION AMONG DEMS? - Despite criticism by some Democrats of the "Medicare for all" plan embraced by 2020 presidential hopeful Sen. Kamala Harris, Democratic National Committee Chairman Tom Perez insists his party is united ... In an interview with Fox News' Bret Baier on "Special Report," Perez said there is "no philosophical debate" among Democrats that universal health care is necessary. However, he conceded there is no consensus on how to achieve that goal. "The Democratic primary will have a debate about how do we get from 90 percent coverage to 100 percent coverage," Perez said. "There are some who advocate for 'Medicare for All,' there are some who will advocate for a market-based approach."