Freddie Gray was arrested in Baltimore on April 12, suffered a severe spinal injury en route to the police station, slipped into a coma, and died a week later. The police van ride was 45 minutes long, with officials piecing together what happened that led to his death. Anger poured into the streets, where Gov. Larry Hogan declared a state of emergency and deployed the National Guard to maintain order. The State Attorney for Baltimore City, Marilyn Mosby, filed charges against the six police officers involved in Gray’s death. Now, nearly three weeks after the charges being filed, the grand jury has decided to indict all of them (via Baltimore Sun):


Some charges were slightly different than what Mosby announced on May 1. The grand jury review is a procedural step to move the case forward to a higher court, from District Court to Baltimore City Circuit Court.

New charges included reckless endangerment, while charges of false imprisonment were removed by the grand jury.

He won’t name the enemy. He won’t allow his intelligence services to study its ideology. His Pentagon releases falsified maps that obscure the enemy’s gains. The enemy captures a city that has been called the key to controlling all of Iraq (Ramadi) and an renowned archaeological treasure (Palmyra in Syria) in a single week, and […]

Islamic State on Thursday solidified their rout of Syrian government forces in the historic desert city of Palmyra, moving to the outskirts to seize its airport and the notorious Tadmur Prison, according to residents and statements from the group.
It was the first time that the Islamic State had seized an entire city from Syrian government forces; it won control of its first major city, Raqqa, from Syrian insurgents and the Qaeda-affiliated Nusra Front after the two became rivals. (NYT)
ISIS is “everywhere” in Syria’s ancient city of Palmyra.
The capture of Syria’s ancient city threatens a UNESCO World Heritage Site described as having “stood at the crossroads of several...
Read the whole entry »

Email ThisBlogThis!Share to TwitterShare to FacebookShare to Pinterest
Yesterday Obama gave a speech saying 'climate change/global warming' is the biggest threat we all face...today this great cartoon appeared...talk about being delusional..on purpose that is. 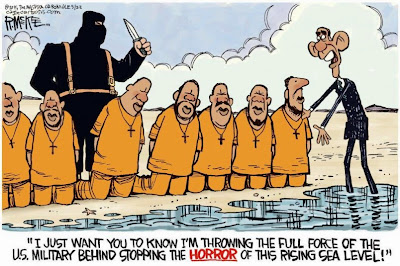 Email ThisBlogThis!Share to TwitterShare to FacebookShare to Pinterest
Op-ed:
The Circle of Deception is Now Complete
By: Diane Sori / The Patriot Factor / Right Side Patriots on CPR Worldwide Media cprworldwidemedia.net 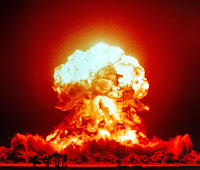 “I am confident that we can show that this deal is good for the security of the United States, for our allies, and for the world."
- Barack HUSSEIN Obama on the possible Iranian nuclear deal

NOT a good week folks NOT good at all. Besides U.S. military equipment falling into ISIS' hands following the Iraqi army's withdrawal from Rumadi...actually yet another incident of the Iraqi's high-tailing it and running...besides Iran reiterating once again that they will NEVER give international inspectors access to its military facilities NO matter what nuclear deal is reached...besides Trey Gowdy's House Select Committee investigating the Benghazi attack issuing a subpoena to former Clinton White House aide Sidney Blumenthal...and besides yet another 'secret' private email server being discovered in the possession of Hillary 'What Difference Does It Make' Clinton...now comes word that North Korea is claiming to be able to make nuclear warheads small enough to fit onto a missile.

And that is a claim NOT to be taken lightly for if true there is the missing piece of the Iranian nuclear puzzle...a puzzle I believe has many pieces already in place...pieces consisting of at least one nuclear warhead just waiting for that last piece...the last piece being miniaturizing...miniaturizing so that said warhead...a lighter, more compact, yet with an equally as powerful payload...could easily be fitted onto Iran's already existing arsenal of short-range and medium-range missiles...missiles more than capable of reaching Israel...missiles that would allow Iran to make good on their ongoing threat of wiping Israel off the map.

And we all know that North Korea has long been supplying Iran with enriched uranium...with material used for bomb cores...materials as in weapons-grade uranium...along with nuclear technology and components...for quite some time NO matter that both countries try to hide the fact that Iran is illicitly trading oil for said uranium and such. And we all know that North Korea...a country that continues to build and operate up to 10,000 complex state-of-the-art uranium-enriching centrifuges...some with the help of Iranian engineers...along with expanding its enrichment facilities at Yongbyon and restarting a plutonium reactor also at Yongbyon...has a multitude of North Korean engineers, technicians, and laborers in Iran helping in the construction and operating of Iran's current nuclear facilities...facilities that include some of those specifically under current contention. In fact, rumor has it that North Korea is also helping Iran build a plutonium reactor to skirt the uranium issue. 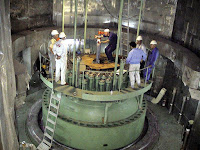 And with Iran NOT able to enrich enough uranium to weapons-grade levels without inspectors...and especially without Israel...detecting, reporting, and possibly shutting down said activity, another country...in this case North Korea...is simply doing it for them. And this is the perfect solution to Iran's being told to scale back its nuclear ambitions...to scale back its HEU weaponization program...as it's a solution involving condensing the uranium into smaller but just as potent quantities...but having someone else do it for a price that Iran can easily afford to pay.

This also means something some of us already know...and that is that the ongoing nuclear-disarmament talks between Iran and the P5+1 nations is NOTHING but a farce that Obama continues pushing both to sign a deal...any deal...for his legacy and to give his brethren in Iran enough enough time to become a nuclear power and change the entire balance of power in the Middle East, thus translating into Obama's so-wanted caliphate being able to continue moving forward.

And this is easily proven by the fact that earlier this week it was verified that both Obama and Hillary Clinton knew that an attack on the Benghazi compound was set to coincide with the eleventh anniversary of 9/11, that guns and weapons were indeed being funneled through Benghazi to the 'supposed' Syrian rebels, that NO joke of a YouTube video was involved, and most importantly that they both knew of the eminent rise of terrorist groups...savage and barbaric terrorist groups like ISIS...were forthcoming...terrorist groups funded and supported by Iran...an Obama hoped for nuclear-armed Iran that is.

Remember, too, that when in September 2012, Iran stated that North Korea was now part of their so-called 'Axis of Resistance’...a 'resistance' that included themselves, Syria, and Hezbollah...Iran was NOT only setting up joint laboratories and scientific exchange programs in the important fields of information technology, engineering, biotechnology, renewable energy, and the environment...as well as essentially announcing to the world that North Korea had become an ally in their ground zero goal of wiping Israel off the map...but was also working around the sanctions both the U.S. and the U.N. had placed on them.

Now remember Obama's hatred...YES hatred...of both the Jewish State of Israel and specifically of Israeli Prime Minister Benjamin Netanyahu himself, meaning what better way for him to help Iran reach their goal then to stretch out the 'smoke and mirror' disarmament talks while at the same time turning a blind-eye to North Korea's recent spade of missile launches...launches that were Iranian monitored...along with their outwardly trading and selling both uranium and missiles to Iran.

And dare we forget that Iran got its first centrifuges from the terrorist infected, Osama bin-Laden hideout country of Pakistan, and that Pakistan’s nuclear program was an offshoot of China's nuclear program, China protects North Korea's nuclear program, North Korea in turn ships Ro-dong and Scud missiles to Iran via Beijing, and Iran sends observers to check out North Korean missile launches and has been doing so for many years...doing so but NEVER reported on.

Are the pieces of the puzzle fitting together for you yet...they really should be for the circle...as in the true and oh-so dangerous 'America's Axis of Evil' circle...is now complete. And again, as always, Obama could care less that his buddies in Iran are directly tied to North Korea and that those ties will be the way Iran thumbs their nose at any agreement reached and signed with the P5+1...as in 'who us...we aren't enriching any uranium...we're just buying it from someone else and the agreement did NOT say that we couldn't.' And of course the agreement will NOT say anything to that affect as Obama will NOT allow anything to prevent him from willingly signing this knowingly very bad deal.

NOT just a very bad deal in and of itself, but a very bad deal paralleling the very bad October 12, 1994 very bad deal with North Korea which was also intended to reign in that country's development of nuclear weapons. In what was called an 'Agreement Framework'...why do they always call all these deals 'frameworks' as they 'frame' NOT a thing of substance...North Korea got to keep two of their light-water reactors, fuel oil, and economic cooperation with the West, in exchange for 'supposedly' halting their plutonium production.

However, within two weeks, the IAEA went 'ooops' as they became more than a bit worried that they had given North Korea too much time to begin complying with the signed agreement...just as Obama is now giving Iran too much time to sign this current farce of a deal. And the IAEA's fears, unfortunately, did come to fruition as the afore mentioned deal did allow North Korea the time needed to reach the point where they are today...nuclear-armed and now aiding Iran...both America's and Israel's enemy...in their quest to also becoming nuclear-armed.

And again, history seems to be repeating itself as this lesson is knowingly and willingly looked away to by Barack HUSSEIN Obama and crew.

Looked away to such a degree that Saudi Arabia is seriously considering acquiring nuclear weapons of their own from Pakistan...after all Saudi Arabia funded much of Pakistan’s nuclear program...and Turkey and Egypt would then logically follow suit...maybe just in time to see a North Korean miniaturized nuclear payload atop an Iranian medium-range missile flying overhead on its way to Tel-Aviv.
Posted by Diane Sori at 12:01 AM No comments: