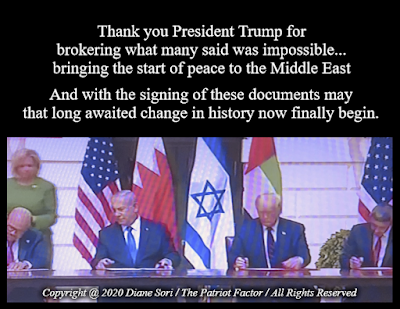 Posted by Diane Sori at 3:11 PM No comments:

Boom. Another bombshell news story the media will censor, scrub, and maliciously ignore. Enemy of the people.

After years of neglect from the Obama-Biden Administration, our service members and veterans have finally found a strong advocate in President Trump. The Trump Administration has rebuilt the military, completely overhauled the Department of Veterans Affairs, and launched groundbreaking initiatives to assist military families and prevent veteran suicide. In contrast, Joe Biden’s record on the military and veterans is one of failure: debilitating budget cuts, failed foreign policy decisions, and an inability to provide our nation’s heroes with the quality healthcare they deserve. Today, 235 senior military leaders endorsed President Donald J. Trump’s re-election and refuted Joe Biden’s failed liberal agenda:

Read entire article and see list of military leaders here: https://gellerreport.com/2020/09/235-senior-military-leaders-endorse-president-donald-j-trump.html/
Posted by Diane Sori at 8:45 AM No comments:

The number of patients who have died from the COVID-19 virus will have topped 175,000 by the time you read this. A vaccine is at least a year away. So far, the only treatment approved by the FDA and Dr. Anthony Fauci, director of the National Institute of Allergy and Infectious Diseases, is Remdesivir, which does nothing but slightly reduce the length of suffering and does not save lives.

Meanwhile, Fauci and the FDA are preventing doctors from using a treatment that shows the potential to reduce deaths by 50%. There is good evidence that 90,000 people died because Fauci and others questioned the studies that claim to prove the treatment works.

That treatment is the infamous Hydroxychloroquine, which often goes by the initials HCQ. Norman Doidge, a psychiatrist, psychoanalyst, and author of The Brain That Changes Itself and The Brain’s Way of Healing, details the history of the use of HCQ against the virus and the debates over the studies in “Hydroxychloroquine: A Morality Tale.” According to the best studies, HCQ could cut the virus’ ability to kill in half.

According to Craig, the senator's statement is "absolutely ridiculous."

"You know what I find fascinating, Martha?" the police chief asked Fox News' Martha MacCallum. "And even Rashida Talib out here in my state of Michigan who is calling for me to resign, let me just say this: when are we going to start talking about disarming criminals?"