April the Giraffe's new baby boy is finally here.
Born at 9:56 am EST. Congratulation to mom and baby.
Welcome to the world little one. 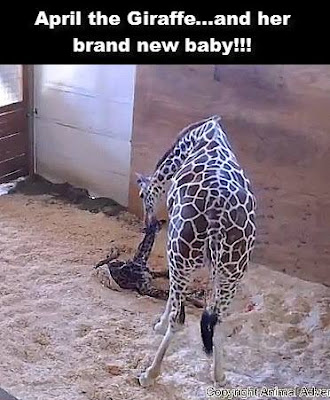 All too many alarmist climate scientists have received millions in taxpayer grants over the years, relied on computer models that do not reflect real-world observations, attacked and refused to debate scientists who disagree with man-made climate cataclysm claims, refused to share their computer algorithms and raw data with reviewers outside their circle of fellow researchers – and then used their work to make or justify demands that the world eliminate the fossil fuels that provide 80 percent of our energy and are lifting billions out of nasty, brutish, life-shortening poverty and disease.

Christy noted that Congress and the public have been getting biased analyses and conclusions that begin with and attempt to confirm the belief that human greenhouse gas (GHG) emissions drive climate change. He said government should “organize and fund credible ‘Red Teams’ that look at issues such as natural variability, the failure of climate models and the huge benefits to society from affordable energy, carbon-based and otherwise.” He demonstrated how average global temperatures predicted by dozens of models for 2015 are now off by a full half-degree Celsius (0.9 F) from what has actually been measured.

Which side are Leftists generally on? Any side that is opposite that of the safety and well-being of Americans. “‘March for Science’ Group Laments Trump’s Bombing Of ‘Marginalized’ ISIS Fighters,” by Michael Bastasch, Daily Caller, April 13, 2017: The organization behind the “March for Science” tweeted the Trump administration’s bombing Islamic State fighters in Afghanistan […]

Posted by Diane Sori at 9:26 AM No comments:

The U.S. military said it had taken out about 80 percent of ISIS terrorists in one fell bomb swoop this week.

The United States dropped the Mother of all Bombs — MOAB — on Afghanistan.

This is the largest bomb that can be used, outside of a nuclear bomb. And it’s never before been used in combat.


“‘As ISIS-K’s losses have mounted, they are using [improvised bombs], bunkers and tunnels to thicken their defense,’ said Army Gen. John W. Nicholson, top commander of U.S. and NATO forces, after the U.S. strike on the jihadist group in Afghanistan.’This is the right munition to reduce these obstacles and maintain the momentum of our offensive against ISIS-K.’

“‘The Pentagon confirmed that the U.S. military dropped the “mother of all bombs,’ officially known as the GBU-43/B Massive Ordnance Air Blast, on an Islamic State tunnel complex in Achin district, located in eastern Afghanistan’s Nangarhar province, marking the first time the massive 21,600-pound bomb was used in battle.

“U.S. military officials have identified eastern Afghanistan’s opium-rich Nangarhar province, located along the country’s border with Pakistan, as the group’s primary stronghold in the region.”

Read entire article here: http://pamelageller.com/2017/04/isis-suffering-big-losses-afghanistant-pentagon-ordered-hit.html/
Posted by Diane Sori at 9:22 AM No comments:

Judge Neil Gorsuch made it through one of the most hotly contested confirmation hearings in American history last week to become the newest member of the Supreme Court. On Monday, he was sworn in by Justices John Roberts and Anthony Kennedy in separate ceremonies, completing a political pathway set in motion by the death of Antonin Scalia last February.

Now conservatives are waiting to see if Gorsuch can live up to the mighty legacy left by the man whose place he will take on the nation’s highest court.

Democrats tried to block the Gorsuch confirmation for several reasons, not the least of which is their party-wide opposition to President Donald Trump. They also wanted payback for Mitch McConnell’s refusal to hold hearings on President Obama’s nominee, Judge Merrick Garland.

But most of all, they wanted to keep Republicans from filling that final seat for as long as possible; they knew that the Supreme Court would soon be considering several high-profile, important cases that could result in a landmark decision or two.

Democrats understood that the 2016 election would inevitably keep the Supreme Court in a conservative-leaning direction, but they wanted to postpone that result for as long as possible.

It failed, of course, and now Gorsuch will be seated for at least two upcoming cases with wide-ranging implications.
The first of them is Trinity Lutheran Church v. Pauley. A religious preschool in Missouri is suing because the state denied them a grant provided to other nonprofit organizations. The state rejected Trinity’s request for funds to improve their playground equipment, saying it would violate the separation of church and state. Lawyers for the church, however, say the state is picking favorites and unfairly punishing religious organizations.