“Do unto others but don't do unto us” was the cry of mega millionaires who call Martha's Vineyard home...home for the summer months that is. Fifty...five zero...50 ILLEGALS caused a (gasp) “humanitarian crisis” to the island of 11,864 residents, of which 86.61% are white U.S. born citizens...oh the inhumanity of it all. Fifty ILLEGALS “overwhelmed” the island's resources to such a degree that the island's ultra-wealthy pleaded with their governor to do something to get “those people” off their island while they set up a “GoFundMe” page so that “outsiders”...read middle-class folks here... could help fund those they felt had no business being on their island in the first place.

Claiming that “outsiders” donations would go into the “Martha's Vineyard Community Foundation”...the island's private foundation with current assets totaling $14+ million...now sought monies for a “Migrant Relief Fund,” because the residents were "concerned about the well being of the migrants” (who seemed quite happy actually) that Gov. DeSantis sent to their island. Guess the local mega millionaires chipping in was out of the question.

Yet concerned they were not, for within 24 hours of the ILLEGALS arrival on the island, Massachusetts Gov. Charlie Baker sent 125 National Guard members to “gather up” from the “sanctuary” of St. Andrews church the 50 “overwhelming” ILLEGALS and move them to the mainland's Joint Base Cape Cod (JBCC) under the guise that “the island communities are not equipped to provide sustainable accommodations” for an extra 50 people. Such utter nonsense indeed, yet it ended the anything but “humanitarian crisis,” by relieving Martha's Vineyard residents of the burden of having to live up to their words of being true champions of “diversity.”

Hypocrisy abounds on Martha's Vineyard proving once again that when big money talks politicians not only listen but do as they are told.

And in this case of course money talked, and...poof...the 50 ILLEGALS are gone at the same time that the island's “GoFundMe” page went from concern for the so-called “migrants” to having “outside” donations now being used to “build up a reserve to assist situations like this in the future, rather than directly helping this group of migrants and their situation." A sham indeed for the residents know well that ILLEGALS will never again set foot on Martha's Vineyard especially if the island's newest “star” residents...the Obama's...have any say in this. So don't be surprised if anytime soon Martha's Vineyard becomes a “no-fly zone” for any and all out of state flights that try to land on the island rather it be during the day or secretly in the dark of night.

But really, folks on Martha's Vineyard should have no fear of secret night flights as neither Gov. DeSantis nor Gov. Abbott have ever snuck ILLEGALS anywhere in the dead of night like Joe Biden and his Democrat ilk did, and most likely still do. And with both governors having made their intentions publicly known that they have had enough of Biden's “open border policy,” and now have been forced, courtesy of Biden's inactions, to take matters into their own hands. And with the border truly being unsecured said governors...governors of states proudly minus “sanctuary” designation...have said they will continue to send ILLEGALS to Democrat controlled cities and states that have designated themselves so.

In fact, DeSantis has openly stated that states like Massachusetts, New York, and California have openly invited “these individuals” into our country by “incentivizing illegal immigration” through their very “sanctuary” designation. So now after Massachusetts...after Martha's Vineyard...received and evicted 50 of the very folks they claim to be champions of, we find that for Massachusetts and other liberal states, that talk of “sanctuary” is but empty words spoken...words used to play on the emotions of “bleeding heart liberals” in their effort to push forward a political agenda that reeks of hate for all things America and Americans first.

Why else would Massachusetts' governor have sent the a fore mentioned “125 National Guard members” to remove but a mere 50 individuals...individuals still erroneously being refereed to as “migrants.” Why else indeed but to put on a show of force that has become but political theater of the absurd for the message Governor Baker sent, I believe, was but a foolish response to DeSantis' having exposed for all to see the total hypocrisy of what being a “sanctuary” really means.

And so as Obama and his fellow uber-rich, elitist island residents continue on with their pro-sanctuary and “diversity” sham...we know Obama himself would never allow an influx of such “beneath him folks” to sully his $12 million, 29 acre piece of summer paradise. And yet this man knows that his one compound alone could house hundreds if not thousands of needy so-called “migrants” on its grounds, via tents and trailers, if need be. But as what is usually the case with Obama, “what's good for the goose is surely not good for the gander,” except maybe if the gander were his BLM buddies that is

And what I just said regarding Obama has to be true for he is a man usually quite vocal, and yet not a peep has been heard from him regarding the 50 ILLEGALS plight. But why would there be when Obama probably, in my opinion, had a hand in the governor's agreeing to move them all to Cape Cod.

So now that Martha's Vineyard, Chicago, New York City, and Washington D,C., have had but a small taste of what Texas border towns deal with on a daily basis, and now that we have seen first hand how each of their respective Democrat mayors cry “fowl” while screaming how dare Republican governors use “migrants” as political props, the hypocrisy has not only moved front and center, but the Democrats continuing to bus and fly ILLEGALS into “red states” has been exposed.

Election busting via vote garnering was always the Biden administration's plan, but with proper understanding of key verbiage used said plan can be rendered not only useless, but lay the foundation for a Republican led investigation into the criminal actions of Biden and his "America last" crew.

And here let's begin with Joe Biden's words chosen when calling Republican governors to task in a recent speech he gave to the Congressional Hispanic Caucus Institute’s Annual Gala. Saying that, “Instead of working with us on solutions, Republicans are playing politics with human beings, using them as props...what they’re doing is simply wrong, it’s un-American, it’s reckless,” in regards to their flying and busing ILLEGALS into key Democrat held cities, what really is reckless is Biden's refusing to call these folks what they really are...ILLEGALS who cross our southern border knowing well that they are breaking our immigration laws, thus being criminals all.

Remember, legal immigrants apply to come to our county and follow our immigration guidelines, those now crossing the border do nothing of the sort. They enter, en masse... sort of like an invading army...unannounced with their hands out for Biden's promised “free stuff” knowing that the only price they will have to pay is to vote Democrat...vote ILLEGALLY in elections they have no right to vote in no matter what the Democrats say.

So why do those entering our country ILLEGALLY have no right to vote...because the U.S.Constitution states in Amendment XV, Section 1...ratified in 1870 by the then 37 states...that, “The right of citizens of the United States to vote shall not be denied or abridged by the United States or by any State on account of race, color, or previous condition of servitude.” And while ratified after the Civil War in relation to freed slaves, the word “citizen” clearly speaks for itself for nowhere in the Constitution are the words “migrants” “residents” or “ILLEGALS” stated in regards to voting or anything else. And besides, becoming a citizen...and thus being afforded the right to vote...requires one to go through a lengthy naturalization process...just being here does not a “citizen” make...Democrats be damned.

Simply, entering our country ILLEGALLY is a crime not only against the Constitution, but a crime against America and “We the American people” as well...albeit one the Biden administration has gotten away with as over two million ILLEGALS have crossed into our country this fiscal year alone.

And then there's the word “migrant” that both Democrats and the media deliberately misuse in an attempt to change the status of those entering our county ILLEGALLY. The definition of “migrant,” according to the Merriam-Webster dictionary, is someone who “moves from one place to another usually in an attempt to find work or better living conditions.” But claiming to be a “migrant” does not confer automatic legitimacy for to do so a “migrant” would have had to come here legally through the process like true “immigrants” do. Those now invading our southern border under the guise of being “migrants” is but a lie that Democrats and the media...sadly including FOX News...know to be truth, yet they continue to use the word “migrant” in describing what are ILLEGALS, thus making the Democrats and the media, in a way, accessories to knowingly criminal behavior.

Now here lets bring it back to the actions of Florida's Gov. DeSantis who did what he did in an attempt to not only transport ILLEGALS to what are designated “sanctuary” destinations, but will continue to do so until Biden's now open border policy is dealt with. And this is no matter that California's Gov. Gavin Newsom wants the Department of Justice (DOJ)...wants AG Merrick Garland himself...to investigate whether or not DeSantis' sending so-called “migrants” to Martha’s Vineyard who ILLEGALLY entered the U.S. is legal or not in regards to “kidnapping” or possibly being RICO (Racketeer Influenced and Corrupt Organization) violations.

But to Newsom I say you really must be kidding for the ones you are defending are criminals...are law breakers...in their own right...for they admitted to having entered our country ILLEGALLY which remains a criminal offense committed as per our immigration laws. I guess Newsom failed Civics 101.

Simply, for Newsom, his actions are but an attempt to bolster his presidential aspirations, and in regards to the Soros funded immigration lawyers and activists who are pressing a class action lawsuit against DeSantis on behalf of the 50 ILLEGALS who willingly chose to break our laws, they now rightfully see their actions being rendered a joke for Florida's governor has in his possession consent forms (in both English and Spanish) signed by the 50 ILLEGALS who wanted to take advantage of chartered flights to Massachusetts. Besides, it's in Florida's state budget...a budget any and all can see...that roughly $12 million was allocated in said budget...allocated and approved...to carry out this very relocation program now being questioned. 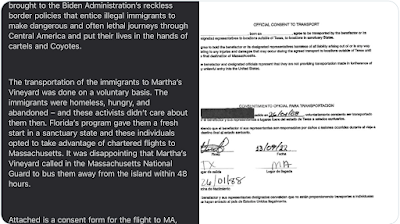 And guess what...Delaware you're next and rightfully so!

But the crux of this discourse remains what it has always been, the disaster known as our southern border...a border “unsecured”...a border being invaded by ILLEGALS with their hands out who are indeed political paws...pawns of the Democrat party who are using them simply to garner votes as they watch their power hold on both the House and Senate slowly start slipping away. Case closed.