In the wake of an alleged brutal rape at Rockville High School in Maryland by two illegal aliens last week, Montgomery County Superintendent Dr. Jack Smith is accusing parents of racism and xenophobia. He also claims threats are being made against students and schools.

"While I know this tragic incident has become part of a national political debate, I want to remind community members that the lives of real students have been forever affected," Smith sent in an email Thursday morning. "While many have chosen to engage civilly in the conversation, far too many have crossed the line with racist, xenophobic calls and emails. MCPS is working with law enforcement to identify those who are making threats toward our students and schools. This behavior will not be tolerated in our community."

Nowhere in the email was it mentioned the suspects are in the country illegally, with at least one facing deportation.

Parents have been protesting outside of Smith's office in recent days and did not mince words about the situation during a public meeting Tuesday night. One parent said he took his daughter out of school last year because of an unsafe environment.

Smith avoided questions about the alleged sexual assault for days and had to be confronted by a reporter in the parking lot outside of his office before finally answering questions. He is in charge of 204 schools in the district.

Theresa May: London jihad attack not Islamic, but “Islamist terrorism…a perversion of a great faith”
By Robert Spencer / Jihad Watch

How is “Islamist terrorism” a “perversion of a great faith”? The learned imam Theresa May did not bother to explain. For her and her ilk, it is self-evident. Yet one might get the impression that violence against unbelievers is not at all a perversion of Islam from the authoritative sources in Sunni Islam, the schools […]

The Saboteur-In-Chief wasn’t content with the eight years of damage he did as President. Now he is determined to make sure that Trump cannot and does not make America great again.

The Obama administration worked in its final weeks in office to undermine the incoming Trump White and continues to do so, according to multiple sources both in and out of the White House.

Behind the effort, these sources say, are senior government officials who previously worked under President Obama and remain loyal to his agenda. These individuals leak negative information about the Trump White House and its senior staff to a network of former Obama administration officials who then plant this information in key media outlets including the Washington Post and New York Times.

Meanwhile, holdovers from the Obama administration are working to undermine the Trump administration’s agenda through efforts to alter official communications, a number of administration officials confirmed in conversations with the Washington Free Beacon. 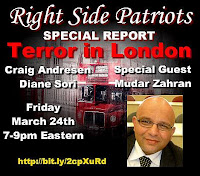 Tonight, Friday, March 24th from 7 to 9pm EST on American Political Radio, RIGHT SIDE PATRIOTS Craig Andresen and Diane Sori present a Special Report on the Terror attack in London with special guest Jordanian Coalition of Opposition Secretary General Mudar Zahran, Also covered will be a recap of the Judge Gorsuch hearings.

Hope you can tune tune: http://bit.ly/2cpXuRd
Posted by Diane Sori at 9:19 AM No comments:

Tucker Carlson is right... if the Republican health care bill does not pass today it is not one person's fault but is the fault of the party itself who cannot decide exactly what it wants due to all the infighting. He also agreed pass it and fix it in increments as it's better than what's there now. I have been saying just this all along especially with reconciliation thrown into the mix.
Posted by Diane Sori at 8:42 AM 2 comments: