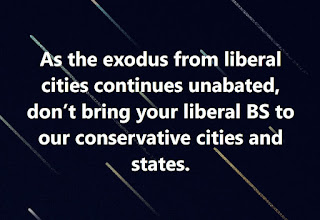 Posted by Diane Sori at 7:18 AM No comments:

Email ThisBlogThis!Share to TwitterShare to FacebookShare to Pinterest
Labels: exodus, liberal cities
Donald Trump has the Republican nomination for president if he wants it: Lindsey Graham
Graham says Trump would have to run 'a disciplined campaign'
By Hannah Grossman | Fox News

Sen. Lindsey Graham said that Democrats have misplaced their hand and explained the GOP's path to power for the midterm elections in 2022 on 'Hannity.'

Sen. Lindsey Graham, R-S.C., said former President Trump would likely have the Republican nomination for the 2024 elections if he wants to run.

"Unless there's something coming out of left field I don't see coming, it's his nomination if he wants it," Graham told guest host Pete Hegseth on "Hannity" Wednesday. "The Republican base appreciated him. We don't appreciate all the things he does sometimes. But from a policy point of view, he was the most successful president from a conservative's point of view since Ronald Reagan."

"[Trump] will be in the White House in 2024 if he runs a disciplined campaign," Graham said.

Trump should remind Americans that he secured the southern border and destroyed the Islamic State caliphate, among other achievements, Graham said.

A jury on Wednesday found Ghislaine Maxwell "guilty" on five of six accounts for aiding her former boyfriend, Jeffrey Epstein, in abusing teenage girls, including sex trafficking. The single count she was found "not guilty" on had to do with enticing a minor to travel to engage in illegal sex acts, which applied to just one of the four accusers.

The trial centered around the testimony of four women who said Epstein had sexually abused them in the 1990s and 2000s when two of them were as young as 14 years old. One of the two victims said that Maxwell was present during the abuse and another said that Maxwell herself abused her.

While no sentencing date has been set yet, Maxwell could face 40 years alone for the sex trafficking charge. She was also found guilty of a charge regarding the transportation of a minor with intent to engage in illegal sexual activity, which she could face an additional 10 years for. Other charges had to do with conspiracy, which each carry a five year maximum sentence.