The Egyptian government is cracking down hard against the sharia oppressors, taking the hard steps that the free world needs to take, if the appeasers and accommodationists were not in power.

The decision against the Freedom and Justice Party comes ahead of parliamentary elections expected this year and prevents the group from trying to rejoin politics a year after leading member, President Mohammed Morsi, was overthrown by the military.

The party was founded in 2011 by the Brotherhood, Egypt’s historic Islamist movement created in 1928, after President Hosni Mubarak was deposed in a popular uprising and it went on to dominate subsequent legislative elections.

The Middle East News Agency said the decision by the Supreme Administrative Court is final and can’t be appealed.

The party’s website quoted an unnamed senior member of the party as saying the ruling was “vindictive” because it had refused to endorse the post-Morsi political order. The official criticized that the court decision could not be appealed.

The court, headed by Judge Fareed Tanaghu, said the party’s affiliation with a supra-national group — the Muslim...

Read the whole entry »
Posted by Diane Sori at 10:36 AM No comments:

In FrontPage I discuss how the mainstream media fronts for the jihad:


The Spanish government on Monday announced that it had “provisionally suspended” sales of weapons to Israel because of its supposed targeting of civilians in Gaza. This came a day after the Obama Administration declared that it was “appalled” by Israel’s “disgraceful” shelling of a UN school in Gaza. UN Secretary General Ban Ki-Moon called the shelling a “moral outrage” and a “criminal act.” The only problem with all this moral indignation is that it is wrongly placed on the victim rather than the perpetrator, and bears witness to the success of Hamas’s propaganda barrage.

These are just two of the most recent examples of the success of Hamas’s skillful manipulation of the mainstream media, and the eagerness of the media to be manipulated – an eagerness so great that amid the frenzy to demonize Israel in the court of world opinion, Hamas’s oft-reiterated genocidal bloodlust and brazen breaking of ceasefire agreements goes unreported and ignored.

The U.S. condemnation of the Israeli shelling of the UN school was a particular victory. Jeff Dunetz reported in Truth Revolt Monday that “evidence is emerging that the Israeli strike hit outside of the school and the bodies were moved into the courtyard to make it look like Israel hit the school.” This wouldn’t be remotely close to the first time that Palestinian jihadis have been caught faking Israeli “atrocities” – recently they even billed a still from a horror movie as a fresh Israeli killing of a Palestinian civilian.

Meanwhile, Hamas is cheerfully above-board about how it manipulates the mainstream media. The Middle East Media Research Institute (MEMRI) reported in July that “in light of the recent round of fighting in Gaza, the Hamas interior ministry has issued guidelines to Gaza Strip social media users for reporting events and discussing them with outsiders.” These guidelines included this unabashedly Orwellian instruction: “Anyone killed or martyred is to be called a civilian from Gaza or Palestine, before we talk about his status in jihad or his military rank. Don’t forget to always add ‘innocent civilian’ or ‘innocent citizen’ in your description of those killed in Israeli attacks on Gaza.”

At Netroots Nation, liberals slammed voter ID laws, labeling them something akin to “Jim Crow” laws. Yesterday, the U.S. District Court For The Middle District Of North Carolina refused to block the state’s voter ID law, which will be enforced in the upcoming midterm elections.

Here's what the Court said in their opinion:


After careful consideration, the court concludes that Defendants’ motion for judgment on the pleadings should be denied in its entirety. Plaintiffs’ complaints state plausible claims upon which relief can be granted and should be permitted to proceed in the litigation.

However, a preliminary injunction is an extraordinary remedy to be granted in this circuit only upon a “clear showing” of entitlement.

After thorough review of the record, the court finds that as to two challenged provisions of SL 2013-381 [ NC’s voter ID law], Plaintiffs have not made a clear showing they are likely to succeed on the merits of the underlying legal claims. As to the remaining provisions, the court finds that even assuming Plaintiffs are likely to succeed on the merits, they have not demonstrated they are likely to suffer irreparable harm - a necessary prerequisite for preliminary relief - before trial in the absence of an injunction.

Consequently, the motions for preliminary injunction and the United States’ request for federal observers will be denied. This resolution renders the motions to exclude expert testimony moot.

You can read the entire opinion below by clicking on link:

NC Opinion On Voter ID by electionlawcentercom
Over at PJ Media, J. Christian Adams, who served as an election lawyer in the Voting Rights Section at the U.S. Department of Justice, wrote that the DOJ actually spent tax dollars on a "turnout-doesn’t-matter-because-life-is-harder" expert to help make their argument (emphasis mine):

The Justice Department had actually argued that even if black voters turned out at higher rates under voter ID (which they do), because blacks have to take the bus more and their life is generally harder, then voter ID and curtailing early voting violates the Voting Rights Act.…

The Justice Department actually used your tax dollars to pay for an expert to introduce the turnout-doesn’t-matter-because-life-is-harder argument. Enterprising folks will submit a Freedom of Information request to find out how many tens of thousands of dollars that nonsense costs you.

Hans von Spakovsky, former DOJ voting official, says it is going to be a very bad weekend for lawyers at the Justice Department Voting Section. “Eric Holder has been beaten now twice in the Carolinas on voter ID. Today’s ruling shows just how wrong he is when it comes to election law.”

Thursday, President Obama authorized targeted airstrikes in Iraq in order to protect Americans and civilians in the region. He also gave the green light to air drop food and water to Iraqis trapped on a mountainside in flee of Islamic militants. "We intend to stay vigilant and take action if these terrorist forces threaten our personnel or our facilities anywhere in Iraq," the president said.

The airstrikes began Friday near the Kurdish city of Irbil and today we have learned of four additional strikes on armored trucks that were allegedly firing at civilians.

This is the third round of strikes the U.S. has launched since Friday.


The U.S. military says American jet fighters and drones have conducted four more airstrikes on Islamic militants in Iraq, taking out armored carriers and a truck that were firing on civilians.

U.S. Central Command says the strikes were spread out, with three before noon Eastern Daylight Time on Saturday and one about 3 p.m.

The military says indications suggest that the strikes were successful in destroying the armored vehicles.

This is the third round of airstrikes against Islamic State forces by the U.S. military since they were authorized by President Barack Obama.

From the Wall Street Journal:


In the first, U.S. fighters and drones struck one of two Islamic State armored personnel carriers seen firing on Yazidi civilians near the town of Sinjar, and destroyed it.

In the third strike, U.S. aircraft located and fired on two additional carriers and an armed truck, and were successful in destroying the intended targets.

In the fourth strike, the U.S. located and struck another armed personnel carrier near Sinjar, with indications that the strike was successful in destroying it, military officials said. All aircraft safely exited the area, the officials said.

Members of the radical Islamic State (formerly known as ISIS) continue to brutally murder religious minorities in their mission to establish a Caliphate throughout large swaths of Iraq and Syria. Tens of thousands have been displaced due to the conflict as the militants have begun to slaughter Christians in their advance into northern Iraq.

In a statement delivered this morning, President Obama announced that there are no current plans to evacuate the U.S. embassy or consulate in Iraq. He stressed that we will not solve this problem in a matter of weeks, but humanitarian aid to Iraqi civilians would be a "long-term project."

Now, President Obama is headed to Martha's Vineyard for his annual two-week vacation.
Posted by Diane Sori at 1:14 AM 1 comment: 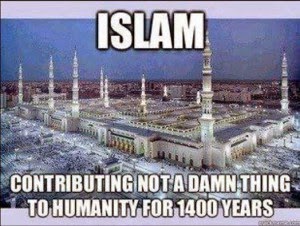