In one exchange Doug Band, who headed the Clinton Global Initiative, asked Ms. Abedin to try to help with a visa for a soccer player from a British team, Wolverhampton FC. Ms. Abedin at first thought she might be able to speed up the interview, but then said she was worried about crossing lines.

“Makes me nervous to get involved but I’ll ask,” she told Mr. Band in one message obtained by Judicial Watch, a conservative group that’s pushed to get a look at the Clinton emails.

“Then dont [sic],” Mr. Band replied to Ms. Abedin.
During the May 2009 exchange, Mr. Band also complained about the difficulty of connecting with Ms. Abedin through her confusing array of different email addresses.

At first Micah Brienen thought his sister-in-law’s text message was a joke.
“I was immediately shocked by it,” Mr. Brienen, of Bonita Springs, Florida, told me. “I thought it was a fake.”

But the text message was not a fake – it was the real deal.

It was a Pledge of Allegiance waiver from his niece’s public school in Tallahassee:

“I understand my rights as a parent and I request that my child, noted above, be excused from reciting the Pledge of Allegiance. This request includes standing and placing his/her right hand over his/her heart.”

His sister-in-law returned the form to the school with the following message: “This is the dumbest thing I have ever read and I am so ashamed of this.”

Now Mr. Brienen is not one to post political stuff on his social networking pages – but when he saw the Pledge of Allegiance waiver – he could not resist.

READ THE FULL STORY AT TODDSTARNES.COM!

The U.S. Army confirmed that a slide on a training presentation featured Hillary Clinton as a potential domestic threat. Her image was included with Aaron Alexis, the Navy Yard Shooter, former CIA Director Gen. David Petraeus, who shared classified information with his mistress, Paula Broadwell, Eric Snowden, and Chelsea Manning—all of which have been accused or convicted to mishandling sensitive material relating to our national security.

Jacqeuline Klimas reported on this rather awkward moment for The Washington Examiner. The photo of the training slide was posted to the U.S. Army W.T.F.! Moments on Facebook. Klimas added that the slide has been removed; it does not reflect official Army policy; and that local units are given some room to formulate their own training programs:


Maj. Thomas Campbell, a U.S. Army Training and Doctrine Command spokesman, confirmed that the photo showed a real training slide that was developed 18 months ago and used locally to teach best practices for handling classified information and maintaining operational security. The training slide has since been removed, he said.

"As is common with Army training requirements, the local unit was given latitude to develop their own training products to accomplish the overall training objective. This particular presentation had not been reviewed or approved by the unit's leadership, and does not reflect the position of the Army," Campbell said. 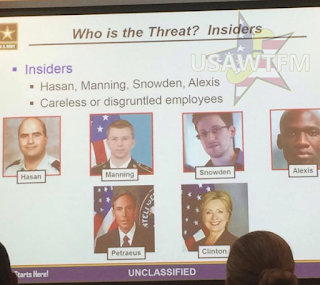 Paid for with money Obama gave them. “Iran Says New Missiles Will Be Designed Specifically To Kill US Ships,” by Russ Read, Daily Caller, August 22, 2016: The Islamic Republic of Iran plans to build new high-speed cruise missiles that could pose a significant threat to U.S. ships operating in the Persian Gulf. Iranian defense […]

Sharia Prez: Hillary Vows To Shut Down Opposition Websites if She Wins

“It goes without saying that we have to beat these people. But I want to beat them so decisively that their kind never rises again,” Hitlery.

Rest assured that websites like mine will be shuttered. There is no question in my mind. In a stunning act of betrayal, Hillary brought the caliphate-inspired Organization of Islamic Cooperation (OIC) to Washington, DC to meet behind closed doors on plans to implement laws and policies to impose Islamic law on speech. she says.

And so it begins.

Democratic nominee Hillary Clinton’s campaign has sent out a fundraising email arguing the website Breitbart News has no “right to...