Top House Democrat: We're Going To Investigate Kavanaugh If He's Confirmed (And Move To Impeach Him)

Alas, there it is, folks; we have another chapter in the saga of the Brett Kavanaugh Supreme Court battle. The judge has been fighting a vicious character assassination campaign executed by the Left. They’ve weaponized the Me Too movement. Three women with accusations of sexual misconduct have engulfed this process in chaos. All three have no corroborating witnesses, all three have zero evidence, and all three came forward at the 11thhour. The allegations are thin. One of the accusers is represented by Michael Avenatti, so you where the credibility for that allegation rests. Nevertheless, the Democrats cannot allow a conservative judge take a seat, where that bloc will have a 5-4 majority for the next generation—and there’s Ruth Bader Ginsburg, who definitely won’t be filing that seat in that span of time. It’s all about stopping the dominoes from falling. Even if Kavanaugh if confirmed, which has been placed in doubt thanks to Sen. Jeff Fake (R-AZ) delaying the final vote until an FBI investigation can be conducted, the Democrats will still investigate him, and make the case to impeach him should he be seated.

Read entire article here: https://townhall.com/tipsheet/mattvespa/2018/09/30/top-house-democrat-were-going-to-investigate-kavanaugh-if-hes-confirmed-n2524079?utm_source=thdaily&utm_medium=email&utm_campaign=nl&newsletterad=&bcid=3d4d66d62ccaf8073faf9aa664866a8a&recip=19180747
Posted by Diane Sori at 8:22 AM No comments:

We don’t usually post feuilleton, but this story was too good to pass up. The Islamic Republic of Iran, while repeatedly uttering genocidal threats against the State of Israel, ends up featuring Israeli soldiers and praising their sacrifice on a billboard in Shiraz. No one could just laugh this off: those responsible have, of course, […]
Read in browser »

A “no” vote on the confirmation of Judge Brett Kavanaugh is a vote against the bedrock principle of the American system of justice – the presumption of innocence. Dr. Christine Ford has accused a man of attempted rape without one shred of evidence. In fact, the only evidence still available after 36 years, limited and imperfect as it may be, favors Kavanaugh.

The first form of evidence are the four “witnesses” who have all declared, under the penalty of perjury, that this never happened. This is not a “he said, she said” situation. Instead, Laura Ingraham calls it a “they said, she said” situation. Ford is the only one of five individuals she claims were present at this party to recall it. The four others have no recollection. And that includes the most significant person, the only other woman she claims was present, her lifelong friend, Leland Keyser Ingham. Ford’s explanation for her friend’s failure to recall this incident is Ms. Ingham’s poor health.

Read entire article here: https://gellerreport.com/2018/09/kavanaugh-innocent.html/
Posted by Diane Sori at 8:12 AM No comments: 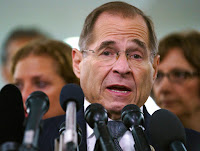 THE LEAD STORY - DEMOCRATS WON'T MAKE IT EASY FOR KAVANAUGH: Democratic lawmakers ratcheted up their threats against Brett Kavanaugh as the FBI investigates his background, vowing to conduct more probes if he is confirmed for the Supreme Court and if they take control of the House ... "If he is on the Supreme Court and the Senate hasn’t investigated, then the House will have to," Rep. Jerrold Nadler, D-N.Y., said on ABC's "This Week." Nadler added that the House would investigate if lawmakers felt the FBI investigation wasn't thorough. “We would have to investigate any credible allegations certainly of perjury and other things that haven’t properly been looked into before," he said.
Nadler likely would chair the committee if Democrats regain control of the House. Democrats have complained about the weeklong deadline imposed on the FBI to look into sexual assault allegations against Kavanaugh and limited scope of the investigation. They also have been threatening to impeach Kavanaugh if he is confirmed for the high court.