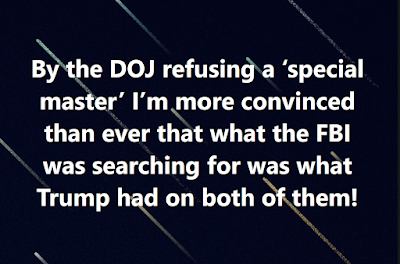 Posted by Diane Sori at 7:02 AM No comments:

Gov. Gavin Newsom (D-Calif) has taken repeated aim at Gov. Ron DeSantis (D-Fla), calling him out because Americans are fleeing his state for a more freer, happier way of life in Florida.

And it turns out, Newsom’s in-laws are big fans of DeSantis’ as well.

According to contribution records, Kenneth Siebel Jr. and Judith Siebel, the parents of Newsom’s wife, made a $5,000 donation to the Friends of Ron DeSantis PAC on April 6, 2022.

The Siebel’s approval of the Republican may make this year’s holiday get-togethers a little awkward.

Outkick founder Clay Travis pointed out the “humor” that Newsom’s own family likes the Florida governor, suggesting that the only thing Newsom can do is take everybody to the “French Laundry.”

Email ThisBlogThis!Share to TwitterShare to FacebookShare to Pinterest
Of Course This Is Who Biden Picked to Lead ‘Centralized’ IRS for His Massive Expansion
Spencer Brown / Townhall Tipsheet

As the Biden administration continues its attempts to consolidate power within the federal government and among its leftist allies, there’s a familiar face being tapped to lead Biden’s effort to surge power, resources, and agents to the IRS — and she has quite the track record of working to target conservative groups and organizations.

One of Lois Lerner’s lackeys from the Obama-era IRS scandal — one that saw the agency target conservative and tea party affiliated groups as a political arm of the Obama-Biden administration — will be leading the Biden administration’s expansion of the IRS and stated goal of hiring 87,000 new agents.

Nikole Flax, who most recently served as the deputy commissioner in charge of the IRS’ Large Business & International Division, has been with the IRS since 2008. According to IRS Commissioner Charles Rettig, Flax will be leading “the creation of a new, centralized office for implementation of all IRS-related provisions” outlined in the...Read more here.