Liberals have this terrible and annoying habit of congratulating themselves for their intellectual heft merely because they hold liberal views. Once this arrogant notion reigns, it's tough for liberals to acknowledge when one of their own says something so remarkably untrue and stupid that it makes you wonder just how ignorant is the liberal really.
At an event for Massachusetts gubernatorial candidate Martha Coakley in Boston on Oct. 24, Hillary Clinton told the assembled Democratic faithful: "Don't let anybody tell you that, you know, it's corporations and businesses that create jobs."

This makes about as much sense as "Don't let anyone say that it's governments that tax people." In attempt to dig out of this rhetorical face-plant, Clinton contended at an event in New York on Oct. 27 that she had "shorthanded this point" in a way that confused the public about what she actually meant. But now listen to her "clarification:"

"Our economy grows when businesses and entrepreneurs create good-paying jobs here in an America where workers and families are empowered to build from the bottom up and the middle out -- not when we hand out tax breaks for corporations that outsource jobs or stash their profits overseas."

That sounds like a hundred Democratic Party stump speeches, creating the evil Snidely Whiplash corporate villain. It also affirms the obvious fact that business creates employment -- at least in a free market economy. That's not a "clarification" of her incredibly stupid gaffe. It's not fixing a "shorthanding." It's a badly disguised retraction.

To Republicans, this sounded like a more illiterate version of Barack Obama's lame 2012 campaign dismissal of that free market economy when he told business "You didn't build that." Entrepreneurs should always credit their success to government-funded highways and teachers, and never to their own skills in the marketplace. It attaches Clinton to Obama's radical waist, and that's not good when he's sporting the lowest-ever approval ratings for an incumbent president.

Team Clinton knows, however, that it can get away with all of this, at least within the "objective" press. There was no coverage of this ridiculous gaffe on ABC, CBS, NBC, NPR or PBS. CNN twice obsessed over whether Hillary and Sen. Elizabeth Warren should have hugged or posed together at the Coakley event, ignoring the idiotic remarks. The same diversion bubbled up Saturday with weekend talk-show host Steve Kornacki on MSNBC.

The New York Times reproduced the stupid remark in a Sunday story, albeit on page A-13, in paragraph 10, when the reader has lost interest. But that was better than the competition. There was no coverage in The Washington Post, the Los Angeles Times, or USA Today. Even the local Boston Globe skipped over the remark. Reporter Akilah Johnson just offered campaign boilerplate from Hillary, such as: "We cannot possibly rest between now and Nov. 4. ... You don't want to wake up the day after this election and say, 'I wish I could have done more.' "

Ken Thomas and Philip Marcelo filed a story for the Associated Press, and skipped the stupidity entirely. This was their chosen Hillary quote to reproduce, touting Coakley in a close race: "From my perspective, it shouldn't even really be a race. It should not even be close, but we're living during an election season where it's close everywhere ... and that's why Martha needs you."

The people who complain that our news media consumption is too "polarized" -- and their assumption that conservatives depend too much on alternative media -- fail to acknowledge how our traditional "news" media are consistently burying Democrat gaffes they don't want anyone to hear about. When Hillary says something stupid, they want it to be just like that metaphorical tree that falls silently in the forest. Peace and quiet is comforting.
Posted by Diane Sori at 12:37 PM 1 comment:

How High Will Your Health Insurance Premiums Go In 2015?

Folks trying to plan their personal fiscal '15 are at a loss. They can't do a budget because they don't know what their health insurance costs will be.

Nobody knows because Team Obama has conveniently arranged for you to be kept in the dark on your health insurance costs until after everyone votes next week.

Most are expecting 5 percent to 10 percent hikes, but there are rumblings of far nastier surprises.

Colorado health-insurance consumers relying on tax credits will see their share of premiums rise an average of 77 percent next year if they keep the same plans, according to the state's preliminary analysis.

While premiums overall are not expected to increase significantly in 2015, the way tax credits are calculated under the Affordable Care Act is creating challenges for Colorado consumers.

You've got to love that "[w]hile premiums overall are not expected to increase significantly in 2015" assurance, followed by the hammer of the rarity of radically decreasing tax credits.

The bottom line is that the total cost while skyrocket for Centennial State consumers buying individual policies if they keep "the plan they like."

Of course most voters won't figure this out until after the elections, but the signs are there. Here's the start of a story from CBS Minnesota:

Minnesotans who bought policies on the state’s health insurance exchange are starting to get their first renewal notices, and many could be in for a jolt.

Cowed by the Islamic State, Boko Haram, the Muslim Brotherhood, al Qaeda and his rolling catastrophic failures of supporting savage jihad revolutions in Africa and the Middle East, Obama takes his revenge on the Jewish State.

Indulging the Islamic Jew-hatred he imbibed in his quran classes as a boy in Indonesia, his relentless attacks against Israel hit a new low today.

The Obama administration is on record calling Netanyahu a “chickenshit” who is not doing “anything” to reach an accommodation with the “Palestinians” or with the Sunni Arab states.” All Israel has done is make accommodation — Oslo, unilaterally withdrawing from Gaza, releasing thousands of Muslim terrorists — and the...

Obama State Department: “Palestinians” who throw molotov cocktails at Israelis are not terrorists

Of course they’re not terrorists. After all, they’re not “right-wing extremists,” now, are they?

“Obama Admin: Palestinians Who Throw Molotov Cocktails at Israelis Are Not Terrorists,” Washington Free Beacon, October 27, 2014 (thanks to Pamela Geller):


The Obama administration insisted Monday that a Palestinian killed by an IDF while attempting to throw a Molotov cocktail at Israeli civilians is not a terrorist.

The Palestinian, a teenager with U.S. citizenship, was shot Friday and buried wearing a green Hamas headband. The Obama administration said in a statement on Friday that it “expresses its deepest condolences to the family.”

At a State Department briefing today, Associated Press reporter Matt Lee asked spokesperson Jen Psaki whether it is appropriate to offer “deepest condolences” to the family of someone killed while attempting to carry out an attack on civilians.

“There are reports … that [the Palestinian teenager] was throwing Molotov cocktails at cars on a highway, and I’m wondering, if that is the case, would you still have been so speedy in putting out a statement and offering your condolences to the family?” asked Lee. “The argument that is being made by some in Israel is that this kid was essentially a terrorist, and you don’t agree with that, I assume,” Lee continued.

“Correct, we don’t,” Psaki said. Lee then asked whether the fact that the teenager was buried wearing a Hamas headband was “of concern at all.” Psaki replied, “I just don’t have any more on this particular case.”

Electronic surveillance of digital communications is routinely in the headlines these days. But a report out this week from The New York Times reveals that Americans with privacy concerns should also be worried about government spying on old-fashioned snail mail.

According to reports, the U.S. Postal Service approved almost 50,000 requests from law enforcement agencies and its own mail-inspection wing to monitor Americans’ parcels for criminal investigations and national security concerns last year.

The information was obtained from the a 2014 audit conducted by the Postal Services inspector general, which Politico recently reported, as well as Freedom of Information requests filed by The Times.

Via a June Politico report:


The Office of Inspector General audit of so-called “mail covers” — orders to record addresses or copy the outside of all mail delivered to an individual or an address — found that about 20 percent of the orders implemented for outside law enforcement agencies were not properly approved, and 13 percent were either unjustified or not correctly documented.

Meanwhile, some of the safeguards set up to catch these shortcomings were missing: The Postal Service wasn’t regularly conducting the annual reviews required by federal rules.

While many Americans have abandoned so-called snail mail for most of their communications, the auditors found the Post Office issued 49,000 mail cover orders in the past fiscal year. And postal workers were often slow to stop recording and sending data on mail even after those orders expired: The audit found 928 covers considered “active” even though the orders for them had expired. 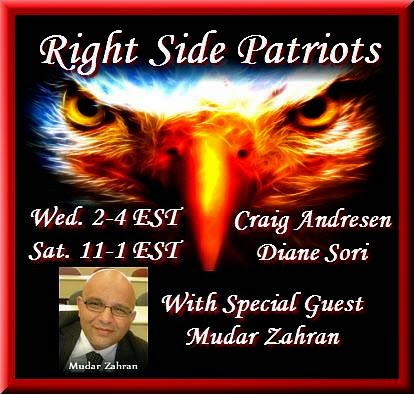 Today, Wednesday, October 29th from 2 to 4pm EST on RIGHT SIDE PATRIOTS on CPR Worldwide Media  http://radio.cprworldwidemedia.com/ Craig and Diane again welcome Mudar Zahran to the show. With the situation in Jordan becoming critical, regime change seems inevitable, and you know Obama's hand will be stirring the pot in the wrong direction.

Pro-Israel Mudar Zahran...the secretary general of the Jordanian Opposition Coalition and leader of the Palestinians in Jordan...of course is NOT on Obama's radar. Mudar joins us today so you can hear what the Obama administration is deliberately ignoring.