Happy St. Patrick's Day to all my Irish blog followers...
and to all who are Irish for a day.

Anyone who understands the modern left could not be shocked by U.S. District Judge Derrick Watson's issuance of a temporary restraining order against President Donald Trump's executively invoked travel ban -- but that doesn't make the order any less outrageous.
The ruling was not just an exercise in judicial tyranny, as many have commented, but an act of jurisprudential nihilism and anarchy. Courts are not policymaking bodies but judicial tribunals that decide actual disputes on the basis of the facts and the law.

Judicial activism overwhelmingly comes from left-wing judges, many of whom see their role as advancing a progressive policy agenda and exhibit little respect for the Constitution and rule of law when they might interfere with that agenda.

When President Trump issued his original travel ban, it was wholly predictable that some court would attempt to nullify it. In that case, its job was made easier by the arguable clumsiness of the rollout, even though most honest commentators believed that the underlying order passed constitutional muster.

Media spins Dutch election as loss for Wilders, who is actually stronger than ever
By Robert Spencer / Jihad Watch

The establishment media is pushing not just propaganda, but fantasy. “Geert Wilders and the Real Story of the Election:The patriotic revolution continues,” by Daniel Greenfield, FrontPage, March 16, 2017: The Dutch Labor Party used to dominate Maastricht. The ancient city gave its name to the Maastricht Treaty that created the European Union. In this election, […]

These are all propaganda arms for the far-left. They don’t deserve a penny of taxpayer money. Why should American citizens have to pay for globalist, anti-American, socialist propaganda? This budget is urgently needed.

The new White House budget proposal, a wish list of President Donald Trump’s policies, would cut funding to several arts and grants programs that Republicans have decried for decades.

Read entire article here: http://pamelageller.com/2017/03/trump-budget-npr.html/
Posted by Diane Sori at 11:48 AM No comments:

Today, Friday, March 17th from 7 to 9pm EST on American Political Radio, RIGHT SIDE PATRIOTS Craig Andresen and Diane Sori discuss Chuck Schumer's threats to shutdown the government, Rachel Maddow has a case of the Mad Cow, and important news of the week.

Hope you can tune in at: http://tunein.com/radio/American-Political-Radio-s273246/
Posted by Diane Sori at 2:22 AM No comments:

Well well...so it seems that our dear Democratic ‘friend’ Senate Minority Leader Chuck Schumer has been very quick with his tongue and his pen of late...so quick to spew out threat after threat on the Senate floor as to how the Republicans will be the cause of Democrats being forced to shut down the government if they insist on building a wall along our still unsecured southern border; if they dare to start mass deportations of illegals (their prime voting block); or if they try to defund (abortion mill and baby-parts seller) Planned Parenthood.

In fact those very threats...threats of “severe consequences” made by hypocrites and sore losers who not only destroyed their own party but who have fought long and hard against all Republican attempts to shut down the government over budget disputes... saw Schumer and other top Democrat senators write a letter composed of what they called “red lines” to Republican Senate Majority Leader Mitch McConnell and to Appropriations Committee Chairman Thad Cochran. Saying, “If Republicans insist on inserting poison pill riders such as defunding Planned Parenthood, building a border wall or starting a deportation force, they will be shutting down the government and delivering a severe blow to our economy,” this letter is nothing but an attempt to try to get Republicans to back down...to get President Trump to back down...on promises made to ‘We the People.’

Hopefully that backing down will not happen even with the likes of RINO Senators John McCain, Lindsey Graham, and a few others, always on the ready to throw a wrench into the Trump and/or Republican mix.

And Schumer also was quick to remind them both in said letter that just last year the Republicans agreed to the Democrats' request that any government funding measure would move ahead without any of what he called “controversial policy add-ons”...like what they now claim Trump’s “$25 million per mile” border wall is...after Trump suggested the possibility of attaching money for it to the must-pass continuing resolution to fund the government...or even as per the rumor mill that Trump is looking to cut funds from the Transportation Security Administration (TSA), Federal Emergency Management Agency (FEMA), and the U.S. Coast Guard in order to fund the wall.

Saying that cutting money from those agencies to pay for the wall is a "pointless burden" and would make Americans less safe, Schumer went on to say in the letter that any cuts of that sort would never happen if he had any say in it.

Sounds like more threats to me...as it should to you as well.

Now as for Chuck Schumer’s threats to shut down the government if mass deportation of illegals begins in earnest...lost on Schumer and his cohorts is the fact that if you come or are already here illegally then you are by definition a criminal for you came to this country knowingly breaking our immigration laws. And nowhere in the Constitution does it say we must harbor or protect criminals of any kind.

So by the government allowing known criminals to remain here the government itself is actually in violation of the Constitution for the Constitution does not delegate to the federal government power over immigration, only over naturalization once someone is here legally...meaning naturalization happens only after going through the required legal processes which illegals obviously have not. Wonder what Schumer would say to that...what excuse he would have for Democrats now taking part in a law-breaking activity as they are the primary one’s fighting tooth-and-nail to stop said deportations. I’m sure he would find some excuse to make right what he well knows is wrong as his party can ill afford to lose one of their prime voting blocks.

And whether illegals be granted some sort of citizenship or even voting rights...or if they continue as they do now...voting albeit illegally...Schumer knows well they do so predominately for Democrats... Democrats who when illegals put their hand out fills it up with whatever they deem they need in exchange for their vote. A vicious cycle indeed but one Schumer dare not allow to be broken. 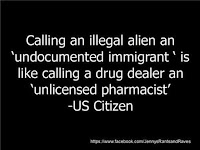 And I hate to tell Schumer...actually I love to tell him this...but changing the moniker ‘illegals’ to ‘undocumented immigrants’ in no way changes their law-breaking status.

And second, what Planned Parenthood does best...or should I say worst...is perform abortions...not abortions as in the case of rape, incest, or the life of the mother, which the Republicans have rightfully left in their new health care draft...but abortions as population control or abortions on demand for a woman's selfish reason alone and even late-term abortions...you know where the baby could very easily survive outside the womb... murder in other words...abortions to the tune of 160 performed for every one child referred out for adoption.

And this is one of the things uber liberal Chuck Schumer and his cohorts want to shut the government down for...what amounts to the killing of babies...and no words I say can ever describe the vileness of this...no words at all.

But no matter the reasoning or the threats issued on the Senate floor, in the letter, or in media interviews, what is fact is that the Democrats shutting down the government over the upcoming $1 trillion spending package is not an impossibility. And why...because Chuck Schumer knows well that the spending measure needs 60 votes to pass and that doing so requires Democratic support. And he also knows Republicans only have a 52 to 46 majority in the Senate (there are two Independents) and therefore would need eight Democrats to cross party lines and vote with them in order to get the measure passed, and thus end any surely-would-come Democrat filibuster of it.

And honestly, I do not see that happening...crossing party lines I mean...but the fact remains that even if the Democrats do force a government shutdown on April 29th...as the government is only funded through the 28th...life here in these United States would not come to an crashing end.

And how do we know that...simply remember back to October 1, 2013, the first day of the 2014 fiscal year, when a ‘funding gap’ happened after disagreements over ObamaCare...as in trying to stop its implementation...thus causing the government to shut down for the first time in over 17 years. That shutdown lasted 16 days, and resulted in the temporary ‘furlough’ of what the Democrats insisted was hundreds of thousands of mostly Democratic federal employees... overpaid and seriously not needed federal employees...federal employees whose very numbers are now being rightfully trimmed by President Trump.

But in the case of the Democrats and their ever so in-your-face obvious vendetta against Trump because he is president and Hillary is not, if they do dare to shut the government down it not only makes them look even worse than they already do, it actually would throw the political ball into Trump’s court as he could now come back and say that he and the Republicans were just keeping promises made to ‘We the People’ and that it is the Democrats who are trying to stop the will of the people...the very people who overwhelmingly voted for him and who have in turn turned their collective backs on the Democrat’s agenda of socialism, inclusion, and freebies for all who have their hands out...an agenda based solely upon an exchange for votes that is.

And what has been Senate Majority Leader Mitch McConnell’s response to all this highly overinflated Democrat bravado and chest beating...McConnell said he was "amused by the Democrats apparently warming up to the idea that threatening to shut down the government is a good idea," knowing full well that the Republicans win either way as shutting the government down would rightfully hurt the Democrats big time in the upcoming midterm elections...as we know it well should.

So to Chuck Schumer I say ‘bring it on’ for whether the government is shut down or whether the funding measure passes as written, President Trump, the Republicans, and ‘We the People’ win and you and your fellow Democrats lose. But know that we have plenty of bubbles, crayons, coloring books, and therapy puppies at the ready to go into service when you and your minions run to your safe spaces to whine and cry...just saying and saying it with a happy wink and a nod.
Copyright © 2017 Diane Sori / The Patriot Factor

Today, Friday, March 17th from 7 to 9pm EST on American Political Radio, RIGHT SIDE PATRIOTS Craig Andresen and Diane Sori discuss Chuck Schumer's threats to shutdown the government, Rachel Maddow has a case of the Mad Cow, and important news of the week.