Longtime Harvard Law professor Alan Dershowitz has been invited to speak at UC Berkeley by a pro-Israel student group and in typical fashion, he's getting push back.

During an interview with Fox and Friends Thursday morning, Dershowitz revealed the university allows pro-Palestinian speakers to come on campus essentially whenever they like, but require an eight week waiting period before pro-Israel speakers are allowed to participate in events. Further, Berkeley administrators have said he cannot speak there because he is a "high visibility person."

Pope Francis and H.R. McMaster are on their way to Pakistan now to explain to Ayman al-Zawahiri that al-Qaeda has nothing, nothing whatsoever, to do with Islam. “‘Dead or Alive’: President Trump Appears on Al-Qaeda Wanted Notice,” by Jack Moore, Newsweek, September 19, 2017 (thanks to The Religion of Peace): Al-Qaeda has had a resurgence […]
Read in browser »

Posted by Diane Sori at 4:54 PM No comments:

Where for art thou, America?

When I first saw this story go by this morning, I thought for sure it was fake news. Silly me, it’s not. Photos surfaced today of a West Point alumnus and combat veteran who was holding a pro-Colin Kaepernick “Communism Will Win” sign within his cap and while he was in uniform. This really ticked off the military community. I’m still hearing about it.

I am appalled that an alumnus of West Point would do this. He’s an outright, unapologetic communist and proud of it. He should be booted from the military. Infantry Officer Spenser Rapone had his pics posted on a popular military news site today and a massive debate concerning the NFL protests and the National Anthem ensued. Of course, Colin Kaepernick was a big part of the discussion as he started all of this in 2016. “I could be wrong, but I’m pretty sure Colin Kaepernick wasn’t protesting in favor of communism. #ThatGuy,” wrote “Doctrine Man,” who is the moderator of a well-known Facebook page frequented by active military personnel and veterans. No, but he might as well have. He’s protesting for militant, radical racism and it is all wrapped up in communism. See Black Lives Matter.

Email ThisBlogThis!Share to TwitterShare to FacebookShare to Pinterest
Just a Thought...
The Race Card Worked
By: Diane Sori / The Patriots Factor

Why last Sunday did some NFL owners 'take a knee'...because they are scared to death of the very black thugs they hired. Catering to those who played the 'race card,' these owners are truly a sorry and so cowardly sort.
Posted by Diane Sori at 4:42 PM No comments:

Tomorrow, Friday, September 28th from 7 to 9pm on American Political Radio, RIGHT SIDE PATRIOTS Craig Andresen and Diane Sori will be taking on the 'taking a knee' sorts...and we guarantee you this is one show you do NOT want to miss.

Hope you will tune in at:  http://listen.samcloud.com/w/73891/American-Political-Radio#history 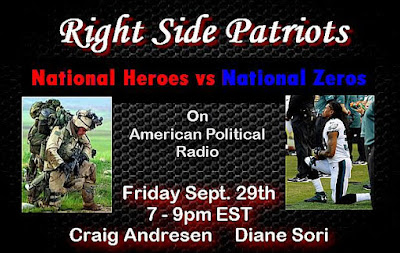 Posted by Diane Sori at 4:36 PM No comments: