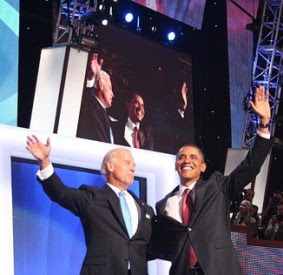 The Democratic Party is sanctioning a Muslim prayer event in conjunction with its nominating convention in Charlotte that will feature a radical Islamic leader who has called for the overthrow of the “filthy” U.S. government and establishment of Islamic law.

“Jumah at the DNC” is being presented by the Bureau of Indigenous Muslim Affairs, or BIMA, from Aug. 31 to Sept. 1. A brochure for the event says the group has “been authorized by the Democratic National Convention (DNC) to conduct Jumah prayer as well as host festivities and Islamically related functions.”

BIMA claims the event is nonpolitical and nonpartisan. However, the brochure for the event has a section for participants to “support the DNC” and make a contribution in an amount ranging from $500 to $10,000.
The Washington Times reported the DNC lists the Muslim event as an “official function” and claims that the Islamic leaders of the program are typical of the DNC community.

The event is expected to draw up to 20,000 Muslims and will include a Friday Jumah prayer ritual and an issues conference. A letter posted on BIMA’s website says its purpose is to “address the concerns and issues that are challenging to the American Muslim Community in the 21st century.” The letter calls on Muslims to stand up and “repel the outright injustices being perpetuated against the American Muslim Community.”

BIMA spokesman Jibril Hough told the Charlotte Observer that among the grievances are the Patriot Act, National Defense Authorization Act and the New York Police Department’s wiretapping program that Hough says was used to spy on Muslims.

Islam expert Robert Spencer, director of Jihad Watch.org, said it is apparent the group plans to use the event as a platform to claim Muslims are being persecuted in America.

“A reading of its agenda makes it clear that the conference will be used to portray Muslims as the innocent victims of a bigoted, racist, ‘Islamophobic’ government and law enforcement establishment that unfairly scapegoats Muslims for the misguided deeds of a few misunderstanders of Islam on Sept. 11,” he said.

Spencer noted that Hough’s mosque, the Islamic Center of Charlotte, is owned by a Muslim Brotherhood front group. The North American Islamic Trust, or NAIT, which owns the mosque, was named as an unindicted co-conspirator in the Holy Land Foundation terrorist funding case. The largest terrorist funding case in American history, it resulted in multiple convictions.

When confronted about the Muslim Brotherhood connection on a radio show, Hough refused to denounce NAIT, saying he was “not necessarily” a member of the group

Hough has also stated in a video that Muslims have been living in America since before the first Christians arrived.

The Grand Imam for the Jumah at the DNC is Siraj Wahhaj, one of the most sought-after speakers by Muslim organizations.

WND reported Wahhaj urged the violent overthrow of the “filthy” U.S. government and the establishment of Islamic law. Additionally, Wahhaj was listed as a “potential unindicted co-conspirator” in the 1993 World Trade Center bombing and testified as a character witness for “blind sheikh” Omar Abdel-Rahman, a convicted WTC terrorist mastermind.

He has also is on record saying Islam is a militant religion.

“We don’t have a turn-the-other-cheek philosophy” like the Christians, he said. “Allah has given us permission to fight them” so that “the word of Allah can be uppermost.”

Another speaker at the DNC event will be Capt. James Yee, who is listed in a promotional video as the BIMA national representative for the DNC. The brochure lists Yee as a “chaplain in the U.S. military” who was an “eyewitness to the unjust treatment of military detainees and prisoners of Guantanamo Bay” and was himself “detained” when he took steps to “prevent this injustice.”

Yee was charged by the government with possessing classified information after being discovered with detailed maps of the detention facility along with other classified materials.

The charges against Yee were eventually dropped over national security concerns about evidence in the case.
Posted by Diane Sori at 11:08 PM No comments:

Breaking news: The Fishwrap of Record has finally discovered that the Obama administration gives its Chicago corporate pals special access to power and regulatory favoritism. On Thursday, The Not-So-New York Times published an A1 story titled "Ties to Obama Aided in Access for Big Utility."
Everyone, put on your shocked faces!

"With energy an increasingly pivotal issue for the Obama White House," the Times intoned, "a review of Exelon's relationship with the administration shows how familiarity has helped foster access at the upper reaches of government and how, in some cases, the outcome has been favorable for Exelon."

You mean Hope and Change was all smoke and mirrors? Well, knock me over with a feather and call me Grandpa Daley!

White House press flack Jay Carney played dumb when asked about the report, which detailed "an unusually large number of meetings with top administration officials at key moments in the consideration of environmental regulations that have been drafted in a way that hurt Exelon's competitors."

"I'm not sure what the issue is, frankly," Carney told the Beltway press corps. Carney, a former Time magazine journalist who pointedly reminded his former media colleagues that he "was a reporter," apparently forgot all the connect-the-dots training he got at his once-hallowed publication.

The issue, dear Carney, is favor-trading and access-peddling. Government for the cronies, by the cronies and of the cronies. The Times spelled it out: "I would like to get some treatment in Washington like that," Ken Anderson, general manager at Tri-State G and T, a Colorado-based power supplier that has been at odds with Exelon over environmental regulations, told the paper. "But Exelon seems to get deference that I can't get."

As I noted back in January in my column on Obama's green robber barons, my scouring of White House visitor logs showed nine visits from Illinois-based Exelon's CEO John Rowe, who met with the president and former Chief of Staff Rahm Emanuel multiple times. The clean energy company's deep ties had already been illuminated by several other business publications, including Forbes and Crain's.

Carney's boss once made it a central hobbyhorse of his presidential campaign. When he announced his presidential intentions in 2007, candidate Obama decried "the cynics, the lobbyists, the special interests who've turned our government into a game only they can afford to play." He indignantly singled out "the best bundlers" who get the "greatest access" to power. ComEd's Clark bundled at least $200,000 for Obama in 2008 and at least $100,000 for the 2012 cycle, and forked over nearly $30,000 more to committees supporting Obama. Earlier this year, Obama acknowledged raising at least $74 million through his team of big-time bundlers who have been showered with access, tax dollars and plum patronage positions.

It's taken four years for the media lapdoggies to call out the Naked Emperor of Chicago-on-the-Potomac.

Better late than never, ya think? I hear the crackerjack reporters at ye Olde York Times may be planning a special in-depth investigative series on the president's dirty D.C. business-as-usual administration slated to run sometime after Election Day. They could call it "Culture of Corruption: Obama's Team of Tax Cheats, Crooks and Cronies." Oh, wait...

Posted by Diane Sori at 7:18 PM No comments:

No matter how Obama twists it...it’s still about the economy
By: Diane Sori

Just what ‘We the People’ do NOT need...the Federal Reserve recently stated that they’re getting ready to intervene if strong consistent economic recovery doesn’t start happening soon.

Oh happy day...another useless stimulus might be on the way. 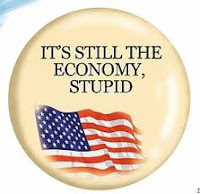 "Many members judged that additional monetary accommodation would likely be warranted fairly soon unless incoming information pointed to a substantial and sustainable strengthening in the pace of the economic recovery," stated the minutes of the Federal Open Market Committee’s most recent meeting.

Our economy is stalled we all know that even if Obama doesn’t, and we don’t need the Feds to tell us what we all can see just by looking around at all those unemployed.  And if you just look at our gross domestic product (GDP), the best measure of our economy's health, and see that economic growth only grew at a snail’s pace of 1.5% in the second quarter, down from 2% in the prior three months, and 4.1% in the fourth quarter of 2011, it’s kind of in your face obvious.

NOT good news for Obama at all especially if you remember his infamous words when he was first elected, or usurped as the case may be, that if he does NOT turn the economy around by the end of his first term then he does NOT deserve a second term.

Well, Obama, you most definitely do NOT deserve a second term.

The economy is now and has always been the real touch point of this election, and any Federal intervention will garner, and rightly so, political backlash from Republican leaders who have basically told Ben Bernanke and the Feds to butt out. Any rush to the rescue by the Feds this close to the November election would be nothing but a politically based maneuver to favor Obama.

But if by chance the Feds do try to be the economy’s savior, how would they do it...most likely by taking into account that with interest rates still near all-time lows, they probably will try for a third massive round of bond buying, known as quantitative easing, in order to stimulate the economy.

And that is NOT a good thing.

Quantitative easing is a government policy sometimes used to increase the money supply by buying government securities or other securities from the market.  Quantitative easing works by increasing, albeit only temporarily, the money supply by flooding financial institutions with capital in an effort to promote increased lending and liquidity.  Central banks use quantitative easing when interest rates have already been lowered to near 0% levels and have failed to produce the desired economic stimulating effect.  The major risk of quantitative easing is that, although more money is floating around, there is still only a fixed amount of goods for sale. This will eventually lead to higher prices or inflation and leave us NO better off than we are today.

And leading economists have predicted a bleak economic future if Obama is re-elected as he has NO clue as to how a successful economy works.

Bottom line...our economic recovery has indeed slowed and is on the verge of stalling.  And a harbinger of NOT good things to come is the fact that gas prices have started creeping up again, now being close to $4 a gallon for regular in many areas around the country.  And this has Obama worried and has him considering a release of oil reserves from the U.S. Strategic Petroleum Reserve...just in time to use as more campaign fodder for his re-election bid.

So now there’s even more NOT happy economic news on the home front, and its ‘We the People’ who are on the receiving end of that news.  Hurry up November 6th, we can’t take much more of this!
Posted by Diane Sori at 12:21 AM No comments: