WASHINGTON -- Hillary Clinton handed Donald Trump the best campaign issue he could hope for this week, on a silver platter, and he ignored it.

While Clinton was proposing a huge increase in capital gains taxes on investors, which would kill jobs and what little is left of the chronically weak Obama economy, Trump was urging his buddy, Russian thug Vladimir Putin, to step up his cyber-war on the U.S. to find Hillary's 30,000 deleted emails.

Worse, Trump didn't respond negatively when a reporter asked him if he would recognize Putin's military seizure of Ukraine's Crimean peninsula as Russian territory. Or whether he would lift U.S. sanctions against Moscow for its act of war on a sovereign country.

Putin's military takeover of Crimea in 2014 was the first time since World War II that a European nation has seized territory from another country in the region. And he is now said to be looking at the Baltic states as his next victims.

The Democratic Party is still far from unified after a long and drawn-out primary season. Plenty of Bernie Sanders supporters are not about to jump on the Hillary Clinton train, and these California delegates figured out a way to show their displeasure at their party's choice of nominee. They covered up part of the "HILLARY" sign to change it to "LIAR."
A tweet with a picture of the modified sign has gone viral: 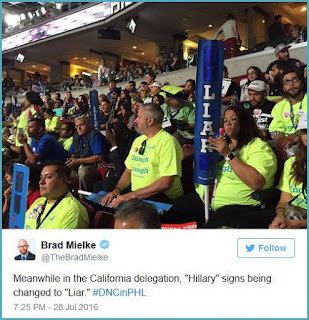 Props to them to sticking to their guns and sticking it to the DNC.
Posted by Diane Sori at 2:19 PM No comments:

The worst German Chancellor since Adolf Hitler is bent on national suicide. “Merkel rules out migrant policy reversal after attacks,” BBC, July 28, 2016: Recent attacks in Germany involving asylum-seekers would not change its willingness to take in refugees, Chancellor Angela Merkel has said. She said the attackers “wanted to undermine our sense of community, […]

Posted by Diane Sori at 9:27 AM No comments:


EU President: No Matter How Bad Migrant Crisis, Terrorism Gets, We’ll Never Give Up On Open Border

That’s why Europeans have to give up on the EU, if they hope to survive.

“Juncker: No Matter How Bad Migrant Crisis, Terrorism Gets, We’ll Never Give Up On Open Borders”, by Virginia Hale, Breitbart, July 25, 2016:


Jean-Claude Juncker has vowed that no matter how bad terrorism or the migrant crisis gets, the European Union (EU) will never give up on open borders. The European Commission president said terrorism could be countered with better intelligence-sharing between member states.

On France 2’s Four Truths programme this morning, Mr. Juncker said “a lot of initiatives” will be required to strengthen security in the EU. After a bloody month for Europe in which the continent has seen multiple Islamic terror...