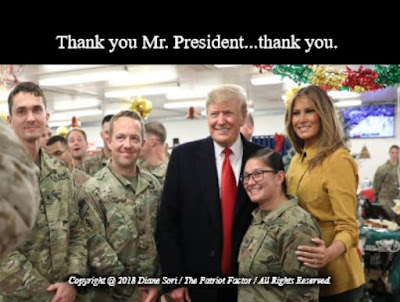 Everyone's favorite reporter, CNN White House Correspondent Jim Acosta, filled in for Wolf Blitzer on Wednesday. During the program, Acosta went into detail about why he thought President Donald Trump violated ethics and campaign laws during his trip to Iraq to visit American troops.

Troops lined up to meet the president and some of them had Make America Great Again hats and flags, which the president signed for them.

Trump flag (she dropped it after she saw me taking a photo) pic.twitter.com/LhPwUNdEK3
— Jennifer Epstein (@jeneps) December 27, 2018

Muslim Rep. Rashida Tlaib to be sworn in on Jefferson’s Qur’an: “Muslims were there at the beginning”
By Robert Spencer / Jihad Watch

Tlaib’s statement here is part of the ongoing effort to rewrite early American history to put Muslims in it, and to recast Thomas Jefferson as an Islamophilic multiculturalist. Reality was different. Jefferson owned a Qur’an because he understood that one must know one’s enemy in order to know how to defeat him. In 1786, Jefferson […]
Read in browser Â»

Posted by Diane Sori at 6:29 AM No comments:

Netanyahu is right. Erdogan, like Muslim leaders the world over, always speaks as if he held the moral high ground, regardless of the blood that is on his own hands. The IDF takes more scrupulous care to avoid civilian casualties than any army on earth. Erdogan’s ongoing charges against Israel are part of the Islamic propaganda campaign to blacken Israel’s reputation and turn people of good will against it — a campaign that has had remarkable success among leftists in the West, including leftist Jewish leaders, to their shame.

Read entire article here: https://gellerreport.com/2018/12/netanyahu-erdogan-dictator.html/
Posted by Diane Sori at 6:24 AM No comments:

Welcome to FOX News First. Not signed up yet? Click here.
Developing now, Thursday, Dec. 27, 2018
CLICK HERE TO GET THE FOX NEWS APP
THE LEAD STORY – TRUMP FLIES TO IRAQ, TELL U.S. TROOPS ‘WE’RE RESPECTED AGAIN AS A NATION’: After a secret 11-hour journey aboard Air Force One, President Trump arrived in Iraq on the day after Christmas in a show of support for the U.S. troops stationed there. The president also took the opportunity to inform U.S. service personnel about his recent decision to pull American forces out of Syria.