The United States is now back in Iraq; we’re sending a scant number of Special Forces into Syria; and Secretary of Defense Ashton Carter said last month that U.S. troops would see “more direct action on the ground” in both arenas. Russia seems to be taking point in wiping out ISIS (and possibly non-ISIS) targets, and our $500 million program to train Syrian rebels was scrapped due to its abject failure. Overall, none of what the U.S. has done has curbed the Islamic State’s influence or expansion, which is probably why 60 percent of the country disapproves of how the president is handling the situation (via AP):


Americans are souring on President Barack Obama's approach to fighting the Islamic State, according to an Associated Press-GfK poll that also found deep pessimism about U.S. prospects for success in Afghanistan and uncertainty about Obama's plan to leave thousands of troops there when he leaves office.

More than 6 in 10 now reject Obama's handling of the threat posed by the Islamic State in Iraq and Syria, where Obama has been escalating the U.S. military's involvement in a bid to break a vexing stalemate. Support for his approach has followed a downward trajectory since the U.S. formed its coalition to fight the group in late 2014. Last September, Americans were roughly split, yet disapproval has jumped 8 percentage points just since January.

And hack 54,000 Twitter accounts. We will be seeing more of this. “ISIS ‘cyber caliphate’ hacks 54,000 Twitter accounts and posts phone numbers of heads of the CIA and FBI in revenge for the drone attack that killed a British extremist,” by Ian Gallagher, The Mail On Sunday, November 7, 2015: Jihadis have hacked tens […]

She has got to go. Germans can’t leave their homes — that’s how dangerous the situation has become.

This is not AfD’s first protest. Last week, thousands of protesters gathered in Erfurt against Germany’s and the EU’s refugee policies. AfD is the only party that is not seen as extremely right-wing, even though it opposes Germany’s current refugee policy and Germany’s whole migration policy.

Current polls say the the AfD is on the rise.

Email ThisBlogThis!Share to TwitterShare to FacebookShare to Pinterest
Op-ed:
Can You Say 'Cover-Up'
By: Diane Sori / The Patriot Factor / Right Side Patriots on cprworldwidemedia.net

Some interesting developments regarding the crash of Flight 7K9268...over the weekend a high ranking Russian official met with Obama and crew in D.C. to discuss the plane crash and now suddenly the always claimed 'muffled' uncharacteristic sound heard in the cockpit has become a 'loud' noise consistent with a bomb.

Can you say cover-up BIG time especially with the F.B.I offering to 'help' the Russians...like the Russians need our help with investigating a crash site. And still NO explosive residue has been found on the bodies or suitcases...bottom line...NO bomb on board brought that plane down...a missile did...period.

Look at the long dark rectangular object coming down off the left side of the plane...that is consistent with the size and shape of a Russian S-202 missile...like the one used by the Russian dissidents who took down the Malaysian flight over Russia a few years ago. I, and my Right Side Patriot partner Craig Andresen, believe this type of missile 'somehow' got into the hands of ISIS who then took the plane down as payback for Putin's bombing the hell out of them and their cohorts...as in the anything but moderate rebels...in Syria...and worse...there will probably be more incidents like this coming.

Are American planes next...that is a key question that must be addressed by this administration. However, when we have a president in office who cannot even say the words 'islamic terrorism' the possibility of this happening to one of ours becomes a scary reality indeed. 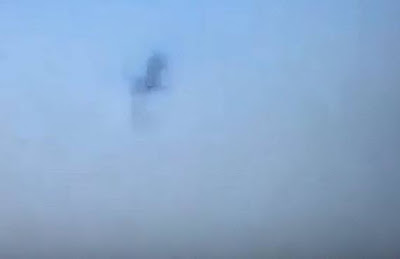 Posted by Diane Sori at 9:58 AM No comments: