...Instead, CRT chooses to place blame on the whole of what they call “white social structures,” with its adherents claiming it's overt across the board discrimination by white folks against people of color no matter a given individuals actions, words, or deeds to the contrary.
But nothing could be further from the truth for, I believe, what Critical Race Theory really is trying to do is propagate the idea that racism in America is not just an in-you-face obvious for the TV cameras occurrence but that it is stealthily “indirect, subtle, and systemic,” and that the fault lies solely within the population of white America. I also believe that the end game of CRT is not now nor has it ever been to actually end racism but to keep the momentum of hate going by manipulating black folks into becoming a faction driven by veiled suppression that the “powers that be” can forever control...
Read entire article here: https://thepatriotfactor.blogspot.com/2021/05/op-ed-being-critical-of-critical-race.html
Posted by Diane Sori at 8:14 AM No comments: 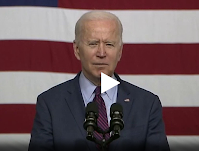 U.S. President Joe Biden will rely on ally countries to supply the bulk of the metals needed to build electric vehicles and focus on processing them domestically into battery parts, part of a strategy designed to placate environmentalists, two administration officials with direct knowledge told Reuters.

The plans will be a blow to U.S. miners who had hoped Biden would rely primarily on domestically sourced metals, as his campaign had signaled last autumn, to help fulfill his ambitions for a less carbon-intensive economy.

Rather than focus on permitting more U.S. mines, Biden's team is more focused on creating jobs that process minerals domestically into electric vehicle (EV) battery parts, according to the people.

Such a plan would help cut U.S. reliance on industry leader China for EV materials while also enticing unions with manufacturing work and, in theory, reduce pandemic-fueled unemployment.

All Floridians treated unfairly by Big Tech platforms will have the right to sue companies that violate this law — and win monetary damages. This reform safeguards the rights of every Floridian by requiring social media companies to be transparent about their content moderation practices and give users proper notice of changes to those policies, which prevents Big Tech bureaucrats from "moving the goalposts" to silence viewpoints they don’t like.

Today, Tuesday, May 25th, from 7 to 9pm EST, RIGHT SIDE PATRIOTS Craig Andresen and Diane Sori discuss 'Being Critical of Critical Race Theory'; 'Let the Lion of Israel Roar'; Fauci's Covid flip-flops; and other important news of the day.